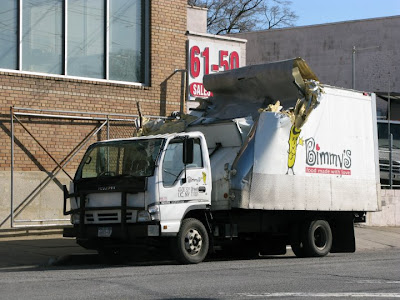 The holidays will shower a little less love on Bimmy's, the Long Island City, Queens-based gourmet sandwich maker whose slogan is “Food made with love.” The wholesaler, which sells its sandwiches at airport cafes and in other locations, filed for Chapter 11 bankruptcy protection late last week, citing more than 50 creditors.

The 15-year-old business, which also has an outpost on Second Avenue in midtown, listed fewer than $50,000 in assets, along with liabilities totaling more than $500,000. In 2007, the sandwich maker had $10 million in revenue, though the recession has taken its toll. Thanks to a drop in sales at airports, where many of Bimmy's prepared foods are carried, the company has slashed employee headcount and tried to improve productivity over the last two years.

Neither Bimmy's founder, Elliott Fread, nor his attorney, were immediately available for comment.

Maybe it was all the campaign contributions.
Posted by Queens Crapper at 12:38 AM

"Maybe it was all the campaign contributions."


Really?..and that it your evidence?

So let's see here, a business grossing some $10 million/yr spends approx $26K on pols..and that broke them

Maybe it's all those letter "D"s that troubles you.

Do you know what sarcasm is?

IT WAS PROBABLY DUE TO THE AIRLINES NOT PAYING THEIR BILLS. THEY SURVISED FOR 15 YEARS, SO OBVIOUSLY THEY HAD A SOLID BUSINESS PLAN - AND KNEW THE CORRECT PRICING - SO IT MUST HAVE BEEN A RECEIVABLE'S ISSUE.

Actually they started to lose the accounts with the airports. Go talk to the airports and ask them why they dropped Bimmys.

payback Time You cant think you are going to remain on top. when you throw dirt on all the people who helped you get there. How about slavery to the employees no pay raises no overtime no holidays no medical benefits.The only requirements to work is you speek no english and you dont have to have a food handling certificate and you work and ask no questions.
So don't be suprise it was bound to happen. Pull out with the little bit of dignity you have made with love. the slogan should have read made with the sweat of slaves

BIMMYS FOOD SUCKS !,THE COMPANY SUCKS TOO. THEY STILL PRACTICE SLAVAERY ! IMMAGRATION WILL MAKE A SURPRISE VIST ,THEN ELLIOT & HIS'S LACKY'S CAN MAKE THE NASTY SANDWICHES & DELIVER THEM TOO,,THE WORST COMPANY TO BE APART OF , DONT INVEST ITS ALL HYPE! THEY R NO GOOD !

THE WORST !,,,,NOTHING BUT MEXICAN'S ! WORK THERE FOR $7 A HR,,, DROPN UR BREAD,MEATS ON THERE DIRTY FLOOR ,DONT EAT THERE FOOD!,,THE WORST !

I worked at Bimmy's many years ago. I will never forget one day one of the Mexican delivery guys screwed up. The owner Elliot Fread slapped him in the face. i still regret not intervening. He knew he could get away with it because the poor guy was probably illegal. What an arrogant jerk.

I worked at bimmys too. And i left due to the treatment of the employees. He had them make fake ids and fake social securities. When i questioned him he said dnt worry! Youre not trained to spot a fake. 7 dollars an hr seems like too much pay. Hed pay 4 dollars an hr. The mexicans feared him. They werent trained to handle food. His chef anthony also verbaly abused them and knew the criminal activity there and did nothing. I hope his business crashes. I feel sorry for anyone who eats from there. Its just disgusting

the worst place I ever worked for. no care for the workers at all. no body can survive on what they pay.more like slavery then anything.