And now the other side of the story 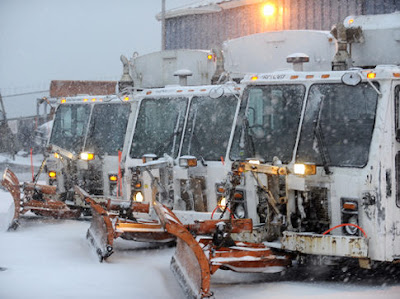 The source of the claim? Three "unidentified" plow workers.

The story claims the unions did this to protest budget cuts. Of course the obvious cause of the snow mess was that budget cuts caused the problem because there were not enough people employed to clear the snow.

Oh snap! I guess that's true. More than $26M of the snow removal money was taken out of the budget for this year. You know, the budget that the mayor created and the City Council passed. Now they're all scratching their heads at why the snow removal system collapsed and are calling for investigations.

I ask, do you really think a "word of mouth" action could actually spread across 4 boroughs? And if they really wanted to muck things up, why not include Manhattan?

In related news, the MTA didn't follow their own protocols for dealing with the snow. But enjoy that fare hike.

Photo from the Daily News
Posted by Queens Crapper at 10:49 PM

i personally observed the d.o.s. employee drive down my block without plowing the snow away.in Bayside. the time was 10:PM on tue.the location area was north on side streets,from northern blvd.to L.I.R.R. fire him!!!!

it was not removed properly until wed. at 1:PM.

I'd like to see an itemization of the costs of snow removal. Seeing how so many people here (and i agree with them) commented on how expensive it was to mount cameras on mta buses, $26 million might not be a lot if a kilo of snow salt costs them one million.

Whatever the cause, the problem was exacerbated by the thousands of morons that thought it would be a good idea to drive to the supermarket for three blocks rather than walk it. Or those people that thought owning a four wheel drive car meant they automatically knew how to use it (I know kung fu, anyone?)

you are missing the point.our driveways had been clean of snow for two days,but we could not drive out of our dead end streets. the snow was too deep.

do not be brainwashed by the anti-bloomberg, group of pro-union controlled gangster extortionists.

it will be almost impossible to confirm these observations because the d.o.s. gangsters involved visit our homes to collect the garbage weekly. most d.o.s. employees most likely were not involved. i hope.

They showed up on my very narrow block at the ass-end of Brooklyn at 3 yesterday with the earthmover. I gave the Sanitation guys kudos for knowing the hood enough that an earthmover was needed instead of a plow on the narrow streets. His response was apprx "You can thank Bloomberg for not giving us enough gear that it took us this long to get here"

Can someone explain pain to me so that I can pretend to feel yours?

Ooh Mike. You don't have to pretend. You can feel mine anytime! Just do me a favor and let Evan smell your fingers afterwards.

Do you really believe that the department of sanitation deliberately staged a slow down, yet miraculously Manhattan was clean as could be?

Think about it, if they were going to slow up on purpose wouldn't Manhattan be the place to do it? Sorry, I don't trust Bloomberg, he keeps swearing there's the same amount of sanitation workers this year as previous years & that's just not true. They had to use trainees who only had 2 weeks in class, sanit police & took people out of administrative positions for this storm.

There might be the same AMOUNT of people but many of them were ill prepared to plow.

This F_ing mayor is so smug

Same amount of sanitation workers perhaps but how many with a Commercial drivers license holders certified to drive a plow.

How you know the Post report is full of it:

"Sources told The Post several neighborhoods were on the workers' hit list -- including Borough Park and Dyker Heights in Brooklyn and Middle Village in Queens -- because residents there have more money and their politicians carry big sticks."

Who would that be?

do not be brainwashed by the anti-bloomberg, group of pro-union controlled gangster extortionists.
Think about it, if they were going to slow up on purpose wouldn't Manhattan be the place to do it?

I drove through Manhattan days latter and it looked usually bad. There is no conspiracy on the part of the DS - they are happy campers making good bucks during these storms and not conspirators. Declare a snow emergency to kick in prior to a storm to launch the appropriate emergency plan to anticipate the storm. If you start this declaration when it has already hit, your plan will not be as effective. What I would like to know, what is the plan protocol, who is bottom line responsible and the Mayor quickly own up to his failure and move on to prepare for the next storm? Can he do that or should the City Council and the Governor investigate his administration? Take ownership May Blooberg!

What airport did Bloomy's plane back from Bermuda land at?

another attempt to put a nail in the coffin for Labor Unions and rights for working and low income people.

Bloomberg is no friend of the poor. Him and his friends create the poor and homeless.

Go to any NYC housing court and observe. the disrespect and disregard for tenants comes down from the top. The Real Estate Clone.

The little emperor doesn't give a crap.

He's already publicly stated that he intends to retire in London!

You can't really blame hizzoner, for after he's destroyed New York...why would he want to live here?

Why dont you ask your city councilman? (Remember them?) - They have by and large been MIA the past week but they were all over the place touring him when the mayor was running for a third term.

Boys and Girls, it's the 1970's Fiscal Crises all over again. Be prepared, take care of your own and your neighbors.

America, first last always, and that includes NYC. I am tired of everyone but ours being taken care of.

maybe that comment about middle village carrying a big stick is b/c Crowleys cousin JOE?

Crowley's cousin Joe does not represent Middle Village and Liz made a faux pas earlier this year which put her on the outs with City Hall. The entire alleged plot written about in this article is stupid and obviously invented by someone who hasn't done their homework.

the man driving the plow with the shovel raised, on my block in Bayside, was not Mike Bloomberg.

do not be delusional,it happened. deal with it......