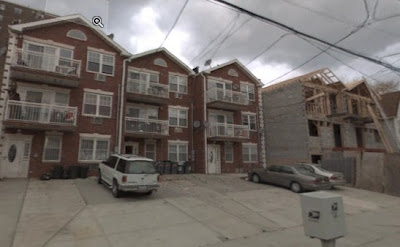 "Hey, excuse me. I am in a rush, but I came across your blog while looking for information on the St. Albans VA Hospital, and love that some one is also pissed off about the over development in Queens. I am a South East Queens resident, born and raised in Jamaica, educated in Bayside from Kindergarten to High School, so I know both areas of the borough extremely well. Yes over development in areas like Bayside, with the Mc Mansions have been a problem, but it was addressed quickly, and you do not see it any more. The reason, community involvement, and over all effective community influence with city government officials. At the very least the over developed houses in the more socially affluent neighborhoods in North Eastern Queens were of good quality.

In the poorer neighborhoods, these developers have no mercy, they come in, buy single family homes, on blocks with identical single family homes, knock them down, then put of extremely cheap, four family attached homes with no drive ways. The homes these developers build do not have grass out front, almost always have white gates out front, painted with cheap white paint that is stained with rust before the quasi apartments are even sold, if they are ever sold, and almost always have a weed garden behind them; I mean these guys don't even have the decency to put a little grass down, and take care of the exterior of the spaces which they rent out. This is occurring block after block, and you know why? Well, the neighborhoods are primarily low income and working class, the inhabitants have little sway in city hall, and the City Councilmen, State Assembly and Congress representatives haven't addressed the issue appropriately.

The community too must take blame for not standing up to those outsiders immorally profiting off of them, while simultaneously destroying the character, identity, and monetary value of their neighborhoods. The most disturbing ones are those which have replaced single family early 20th century (19th century modeled) homes in Northern Jamaica, these homes are quintessential Long Island, and quintessential New York City. In addition, it only takes away from the modern urban appeal of Queens. New York transplants priced out of Manhattan dig Brooklyn because it's character hasn't been compromised, even throughout the turmoil of the late 70's to early 90's. Queens has many of the same architectural beauties, but they are being destroyed at the benefit of a few. I am 28 years old, I embrace all things NYC, and all things Queens, but it is as if the Queens that I know, especially the south side, is being sacrificed for all the wrong reasons, and it is almost too late to act, because the damage has already been done." - Jamaal
Posted by Queens Crapper at 12:00 AM

It's still going on on northern Queens too.

Great post, now if the brain dead at city hall would read and understand this we may have some change, but I won't be holding my breath.

Jamaal, we share your situation in Staten Island on the North Shore. Our civic groups have disentegrated, leavinging disempowered residents with no effective vehicle for concerted action. While other area with "better off" residents have been able to hold the line -and in many cases push undesireable developments into our area, we have been ignored. Zoning violations, building code violations abound; enforcement -or even concern- by City Agencies is nonexistent. You're right: the only way to correct this is some good old-fashioned neighborhood empowerment.

Agree with this poster who describes his area which identical to what has become common place in Elmhurst, Maspeth & Middle Village. The character of our neighborhoods are destroyed, there is no cohesion in architectural aesthetics. There is no effort to even have a nice green patch in the back yard and the front is an unpleasant barren parking lot.
What to do about this? How to organize in a massive way to garner attention to citizens who care about community and well being?

That looks EXACTLY like the barracks in China, whole city's of the exact mass produced building.
Anybody can be trained to slap them up no skill required. All plastic glue together plumbing, windows and doorways

It's a good bet those plans violate zoning regulations - so, why were the plans approved? We had a job filed in our area that was wrong on so many levels - the architect had self-certified it. It took repeated complaints, and ultimately an inquiry to the Borough by the Borough President, before the job was audited - and subsequently amended. Unfortunately, it looks as if, now that construction has started, the developer is playing a game following the original Paving Plan, rather than the amended building plans...

All that garbage needs is the eurocrap bowling pins.

Too late. This city is past hope.

I've seen better housing in the ex-Communist countries of Eastern Europe. And they are pretty sad looking.

Very few people will be willing to admit it, but white people dont stand for this crap. Its only the imports that see this as a good way to live.