Baby brain dead after ambulance gets stuck in snow 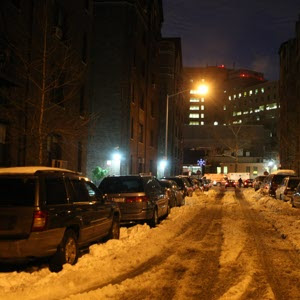 A 3-month-old Queens boy was left brain dead last night after snow-clogged routes prevented medics from reaching him quickly -- and unplowed streets later forced the EMS workers to ditch their ambulance and sprint with the ailing baby to the hospital.

As little Addison Reynoso hovered at death's door, a priest performed last rites, and his family considered pulling him off life support.

"Clean the streets," Luis Reynoso said, "because that's why the ambulance came too late."

On top of the half-hour it took rescuers to get Addison to the emergency room, family members and friends said they were forced to call 911 several times before they could even reach a dispatcher.

"The weather hampered our efforts," an FDNY source said, hours after Addison -- apparently suffering from a respiratory infection -- was declared brain dead. "The snow did impact this."

Addison was being watched by a family friend in Corona Wednesday afternoon when he suddenly lost consciousness.

The frantic baby-sitter knocked on a neighbor's door after failing to reach a 911 dispatcher at around 1 p.m. and told the neighbors to call for help. A few minutes later, the boy's parents arrived, and his father lay the child on the floor and started performing CPR.

Addison's mom, Rocio Xoyatla, meanwhile, made several 911 calls, but only got a tone. She finally reached a dispatcher at 1:12 p.m., a family friend said.

It took at least 12 agonizing minutes longer for EMS crews to reach the home on 39th Avenue, near 108th Street in Corona.

When they arrived, medics found Luis Reynoso hovering over his dying child, desperately trying to blow life into the tiny lungs of the baby.

Reynoso and his wife sprinted down three flights of stairs with their child and climbed into the ambulance, which slogged two miles through the snowy streets with a police escort.

Then, the unthinkable happened. The ambulance got stuck in the snow on an unplowed stretch at Baxter and Layton streets, just 30 yards short of the emergency room door at Elmhurst Hospital.

EMS workers had to sprint the rest of the way cradling the baby, arriving at 1:42 p.m

(The only stupid question is the question you don't ask.)

Given the opportunity, loyal Krappy Krew Member georgie turns a tragic piece of news into a petty question of residency status. And you try to tell us this boro is not full of Archie Bunkers!

Maybe we have a life. What's your excuse? There were 3 deaths blamed on the storm. Guess who's responsible?

the blame belongs on the plow operators who are guilty of "theft of services",when they were hired to clean the n.y.c. streets full of snow.

they knew right from wrong and chose the evil route.
GOD will deal with them in his own way ,unless the homeowners send the videos of their crime to the d.o.i and CM Halloran's office. with the proof they will be fired and jailed.

i observed the plow operator run the plow on my block and move no snow. evil,evil,evil.......

That makes Bloomberg a murderer as well as being his usual unfeeling
iceberg self!

HA! That's what you think. I'd buy the iceberg and sue the owners of the Titanic for damaging my property. FOOLS!!! I'm the king of the world!!!