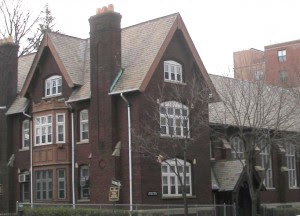 Members of Grace Episcopal Church launched a campaign to persuade local members of the City Council to overturn the city Landmarks Preservation Commission's designation [of Grace's Memorial Hall] when it comes up for a Council vote next year.

But not a single church member attended the commission's public hearing earlier this year to oppose the plan. The church's Memorial Hall was officially landmarked on Oct. 26.

"We're going to fight the designation," said Grace Episcopal's leader, the Rev. Darryl James. "It siphons off potential funding for ways in which we can really continue to do the work of Jesus Christ."

The congregation's church and cemetery were landmarked in 1967 - and Grace Episcopal has felt the financial pinch of the designations ever since, he said.

When the congregation repaired a bluestone walkway to the church, the Landmarks Commission had to sign off on which materials could be used, he said.

But his congregation never told the commission they opposed the designation - and they didn't attend the February public hearing where four people spoke in favor. The commission also received letters of support from several elected officials.

James admitted the church was properly notified of the hearing and said Grace Episcopal was in the middle of various event preparations and the meeting somehow "just slipped through the cracks."

Now brown splotches, signaling roof damage, have begun to mar the ceiling of Grace's Memorial Hall. James said he doesn't know how his church can afford to fix the almost 100-year-old building's slate roof if the designation isn't reversed.

But he has found a friend in City Council member James Gennaro (D-Fresh Meadows). The Council can overturn a landmark designation.

"I'm going to be opposing it," Gennaro said. "More attention should be focused on the financial impacts of landmarking on nonprofit institutions."

Only 20 designations have been successfully reversed since the Landmarks Preservation Commission was formed in 1965, said agency spokeswoman Lisi de Bourbon. Eight were in Queens.

Not to worry, we can always put up signs that explain what used to be there and act like it's an acceptable alternative. This is Queens, after all.
Posted by Queens Crapper at 12:20 AM

Hey put up a Queensmark and give the pastor the Stanley Coogan award from the Queens Preservation Council.

Invite him to speak at Queens Civic Congress on landmark issues.

Queens gets what it deserves. No wonder its a laughing stock among polite circles.

yet another news piece about a cult member of the Sri Chinmoy Meditation Center.
Jimmy the snooze is still taking direction from his guru who rots away in the cult's very own tennis court on Normal Road. look how much Gennaro does for the constituents - as long as they fit into his agenda.

Ask how the Sri Chinmoy Meditation Center Church, Inc. fits into this story.

Jim opposed the term limits repeal, but then ran for a third term anyway... unopposed.

Churches in trouble? This is not Europe, which lives in a post religous world, but in the only rich country where religion in still strong and vibrant.

The only reason the mainline churches are in trouble is a self-inflicted one.

Like the political establishment, they live in a self indulgent world where they choose an agenda to push that meets their interests, not the public.

Unlike the politicans, they don't control the media and have access to public taxes to fulfill their fanasties of reality and insure that they perpetually get re-elected to an endeless gravy train.

Yes, but they and the politicans work together.

Churches get torn down for blockbusting 'community facility' towers which opens the way for more development.

Meanwhile pastors that work 3 hour weeks are guaranteed they can still keep their $100,000 compensation package with or without their congregations.

OK, I'll bite. What does the un-landmarking of part of Grace Church's property have to do with Sri Chinmoy, Inc?

I'm for resurrecting Cardinal Spellman. Man he had balls. Pre- Vatican II. Bring back fire and brimstone and turn the goddam altars around 180 degrees back to where they were.

Like most churches if its landmark status is rescinded it will be turned into Barracks or sold & plowed with in a year.
A couple bingo games a month can pay for the roof, it looks like a 40K job whats the big deal ?
Slate roofing is sheet, roofing cement and 95% labor, the tiles are held in with 2 nails and get reused.
Good chance that pastor drives a Caddy and lives in a $800,000 house gimmie a break

I had Cardinal Spellman for conformation he got real pissed and slapped me twice when I complained and refused to take the girls name "Francis"
--it was changed to Thomas, my mother was pissed.
I'm trying to remember where that was, St.Pancreas church in Glendale?
Anyway all these clergy are nuts

& Merry Christmas to all here!

I wonder what really happened over the past six months to focus this mans mind?

Blotches on the roof? Just now being noticed?

What is it that can be done that landmarking will get in the way of?

Sounds like someone has already approached the Minister with a plan.

First Rev. James complains about the $30,000 cost of properly restoring his walkway.

Then when told grants are available to repair the roof he's "not interested".

Why? Makes no sense.

Gennaro gets campaign donation off the top.

Those who are posting here about the pastor and money have no clue about how the Episcopal Church works. The house, no matter what it's worth, is not his property and he is probably required to live there as part of the job. The parishioners are the ones to blame for not getting to the right meetings. And clergy do NOT just work "3 hours a week." Go ask one.