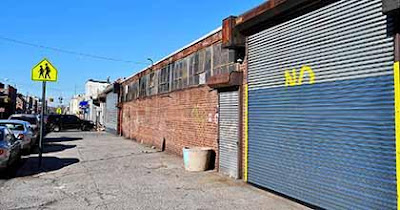 A city agency announced that it found radioactive material in and around a Ridgewood building, and will continue to test the site. Area officials said that the material was left over from the World War II-era nuclear experiment known as the Manhattan Project.

Gary Giordano, district manager for Community Board 5, relayed the announcement at a meeting Dec. 15, but said the material is not dangerous.

A statement released by the city Department of Health also said that the material was not harmful.

The Manhattan Project was the code name for a secret military project responsible for developing atomic weapons during the war, and according to another board member many locations around the five boroughs participated.

The Ridgewood building, which houses auto repair and iron working shops between the addresses of 11-27 and 11-29 Irving Ave., was entirely occupied by the Wolff-Alport Chemical Corp. during the war.

When America joined the allies, the company — along with many others in the industrial sector — was asked to help with the war effort, according to Vincent Arcuri Jr., chairman of the﻿ community board.

“We were major participants in the Manhattan Project,” he said, adding that by farming out the projects to sites all over the city, the project’s secrets would be harder to steal.

The chemical company extracted minerals from a sandy substance called monazite in the 1940s and ’50s, according to a document released by the city. But along with the minerals, the company also extracted a radioactive element called thorium.﻿

Workers got rid of the thorium by flushing it into the sewer system until the Atomic Energy Commission stopped the practice in 1947. Afterward, the atomic mineral was kept in solid form and sold to the government, the document said.
Posted by Queens Crapper at 12:13 AM

I wonder where the Times Ledget and Arcuri got their information from. NYC was the home of the Army Corps of Engineers, and most of the early research was done here, but none of the nuclear-based research or experimentation or research was done here. It would have been absolute insanity to do such things in a highly populated area.

The plutonium came from Washington state, and the uranium was worked on in Oak Ridge, TN.

The mozonite (not monzAnite as written in the article) used in the project came from the Black Hawk Mine in Grant County, New Mexico. Thorium is an ore, and was certainly not brought from any mine into NYC to be extracted.
“We were major participants in the Manhattan Project,” he said, adding that by farming out the projects to sites all over the city, the project’s secrets would be harder to steal.

All over the city? No. All over the US, with some research participation from the UK and Canada.