How about some basic street repair before bike lanes? 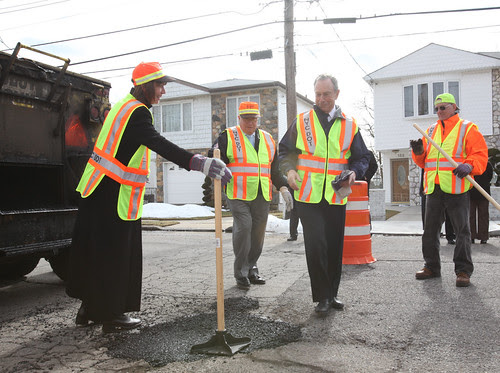 East Flatbush residents have hit a major bump in the road when it comes to getting the neighborhood’s streets made smooth — the city appears to be willing to let roadways big and small across the community go to rack and ruin, even as they rush to add bike lanes that residents haven’t asked for.

A whopping 11 different strips are in such bad shape that they made it onto Community Board 17’s list of capital budget priorities for the fiscal year beginning July 1, 2011. This list is meant to include the panel’s most important projects from all city agencies, but members’ focus on the community’s thoroughfares tell a sad story: repairs are requested from the city’s Department of Transportation, but don’t seem to happen.

Meanwhile, streets like Rockaway Parkway get glistening new bike lanes and neck downs that the community doesn’t even want, and that doesn’t sit well with residents.

Even paving the neighborhood’s bumpiest stretch — Church Avenue between Nostrand and Bedford avenues — has been on hold for years. It was scheduled for repaving several years ago when city officials began a “Congested Corridor” study of the strip, from McDonald Avenue to Utica Avenue, and put the sorely needed work on the back burner, leaving pedestrians and motorists to cope with huge potholes and bumpy roadways at their own peril.

This about sums it up:

“Whenever they want to make a change, it’s done as quickly as possible, but when the community says, ‘We want this done,’ they drag their feet about it,” said Terry Hinds, CB17’s chairman. “They think bike lanes are more important than filling potholes.”

Even when they do pay attention to the streets, they mess it up.

Photo by NYCMayorsOffice on Flickr
Posted by Queens Crapper at 12:10 AM

Seems to me the bike likes should be a priority.

If there were more bicycles on the road and less cars the streets wouldn't be such a mess. Maybe the common everyday New Yorker is too fat to ride a bike and too dumb to navigate the streets safely.

"Poor babies.Seems to me the bike lanes should be a priority"

"If there were more bicycles on the road and less cars the streets wouldn't be such a mess. Maybe the common everyday New Yorker is too fat to ride a bike and too dumb to navigate the streets safely."

Uh, kind of a false choice, eh? The bike program is largely funded by the federal government, and is actually quite cheap. But both the bike program and fixing potholes are about improving street safety. And I can assure you bicyclists want potholes fixed too, since they are arguably more dangerous for bicyclists than they are for motorists.

But you won't hear these points in this article, because the journalism was poor, and the interviewees suffering from a small perspective.

I wish people like Terry Hinds would think about the bigger picture and be a little visionary, and not so divisive.

I wish Queens Crap wouldn't fall for this kind of silly stuff.

FYI: Council Members, borough presidents and the mayor have all put bike lane construction as part of their member item funding. So "The bike program is largely funded by the federal government" is an overstatement.

How about basic street repair and bike lanes?

BTW, there's a big pothole on the bergen street bike lane, at the start of bergen street on the east side. I agree, the roads need to be repaired, hardcore. They're neglected, but I don't see how you can make a correlation between two different road infrastructure problems that both need attention.

That's like saying....oh man, why don't we put cancer patients ahead of AIDS patients...

It's a ridiculous point...

What a ridiculous statement, Queens Crap.

Um, no, it's not. The priority should be fixing existing infrastructure before we move forward with bright ideas that serve a minute percentage of residents.

And not having a bike lane on a street is not a problem. Having a gigantic pothole on the street is.

"FYI: Council Members, borough presidents and the mayor have all put bike lane construction as part of their member item funding. So "The bike program is largely funded by the federal government" is an overstatement"

News to me. Can you provide the evidence for this?

Look at the budget.

Queens Crap, I seriously don't get your hatred. It's really, really old. This blog could be so amazing, yet you consistently choose a path of bitterness, bigotry and silliness. You are doing yourself and your blog a disservice. Please, I encourage you to get past whatever issues you're dealing with, because it's sad, ruins this blog and represents a huge lost opportunity. I am not saying this out of snarkyness or derision, but am truly sincere when I say this.

"I encourage you to get past whatever issues you're dealing with, because it's sad, ruins this blog and represents a huge lost opportunity."

Duh. The entire blog is about dealing with bullshit issues like overdevelopment, overtaxation and overpopulation.

Not having your street repaired but having the DOT come in and put a bike lane on it shows that the administration's priorities are messed up.

Double duh since you fail to grasp that and knee-jerked into "Don't hate bikes".

We have sink holes on 89th Street running from Caldwell Ave to Grand Ave. Complaints to 311 go unheeded (oh they see the case is closed - oh no record of your complaint exists)
Bike lane will only get you killed or kill if the sinkholes don't already get you.

If you don't like the blog then stop reading and posting in it. I think you could find many other things to do with your time than to be complaining about the stuff posted here. If you are trying to turn people off to Queens Crap, it is not working. Readers of this blog do not need you coming to our rescue so you can stop already. Take all those wonderful ideas you have of how this blog could be great and make your own. You sound like a person that would go to the same restaurant, day after day and bitch how the food sucks, yet continue going there as if it were the only one in town.

Don't you have better things to do than to bitch about other people's comments? I'll admit I don't. But you're a hypocrit.

"Um, no, it's not. The priority should be fixing existing infrastructure before we move forward with bright ideas that serve a minute percentage of residents."


LETS HALT ANY PROJECTS THAT HAVE TO DO WITH MOVING FORWARD THEN. Obviously moving forward with anything is ridiculous! GAWD.

I agree...Lets keep Queens, and the rest of NYC from starting any kind of new projects...lets make sure existing programs are absolutely perfect.

Also, instead of pulling articles and "facts" out of your ass, Queens Crap....why don't you actually take a look at the budget http://council.nyc.gov/html/budget/PDFs/dot_exec_rpt_fy_2011.pdf

It takes 45 days on average for a pothole to get fixed. With the budget cuts coming, that timeframe is only going to get longer.

All you have pointed out with your link is "As such, it is foreseeable that additional federal funds could be available in Fiscal 2011 for this initiative."

If they are, we're paying for them as federal taxpayers. And if they aren't, that means NYC taxpayer is paying for them directly. In addition, Crapper said bike lanes appear as member items and you link to some summary paper submitted to the finance committee by DOT.

Now imagine if one of our genius senators had applied for federal stimulus funding to fix the crumbling bridges that all vehicles and pedestrians use. I saw a report on channel 11 the other day that showed a delayed train project that was "shovel ready" back in 2003 that still hasn't been funded and the result was condemnation for no reason and an eyesore corner.

Money could have been applied to that instead of for bike lanes that a very small percentage of people use. No one "needs" bike lanes, bike enthusiasts just want them. Bikes are vehicles that have ridden in traffic in NYC since the car was invented. They also take people off mass transit more than they take them out of cars, so this is just an excuse for the city to get pork and for the mayor to look like an environmentalist.

Talk about pulling shit out of your ass.

The priority should be fixing existing infrastructure before we move forward with bright ideas that serve a minute percentage of residents.

"LETS HALT ANY PROJECTS THAT HAVE TO DO WITH MOVING FORWARD THEN. Obviously moving forward with anything is ridiculous! GAWD.

I agree...Lets keep Queens, and the rest of NYC from starting any kind of new projects...lets make sure existing programs are absolutely perfect."

MUST HAVE MISSED THE PART ABOUT MINUTE PERCENTAGE OF RESIDENTS.

What cracks me up is that NYC already has a higher percentage of pedestrians and mass transit riders than anywhere else in the country, yet instead of concentrating on bike lanes in areas where it actually may benefit the environment (where more people drive), the Feds choose to spend it here so that less revenue is generated by the MTA...

It takes 45 days to fill a pothole? I first called 311 2 years ago about one and several follow up calls later, they still haven't filled it in! Meanwhile, they painted a fucking bike lane right through it!

i wonder if D.O.T. commissioner J/SADIK/K has made a holiday visit to N.Y.U.Medical Center, Rusk Institute at First Avenue /34th Street to give condolences to the paralyzed bike riders and pedestrians.

how much money has n.y.c. taxpayers spent on law suit judgments in the past three years?

To the anonymous poster, who admits to having such an empty and boring life where the only activity he/she can engage in, involves complaining incessantly about a blog no one is forcing them to read. Before you call me a "hypocrit", you might want to learn how to spell the word. It is spelled, hypocrite. Maybe you can go read a dictionary to improve your spelling instead of spending so much time here. You really owe it to yourself to make your spelling as great as it can be. Hey, I'm just trying to help.

Only an asshole would ride a bike in this cesspool of a city.

Toto, you're NOT in Kansas anymore!