He's killing us with taxes 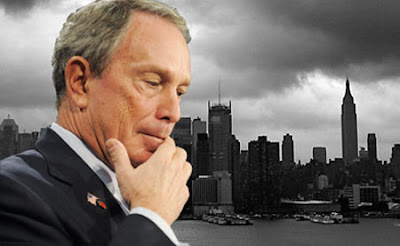 Today, New York City faces a frightening economic future because it has priced itself as a luxury product dependent on a narrow set of customers, namely Wall Street firms and those businesses which lived off the once-thriving work provided by the finance industry, like corporate lawyers or high-powered consultants. But with Washington eyeing a flurry of new regulations and taxes on financial firms that could limit future profits and growth in the industry, New York may be hard-pressed to find other industries that can boost its fortunes.

Let’s start with property taxes. Thanks to the mayor’s tax increases, as well as sharp boosts in assessments, firms located in Midtown Manhattan pay, on average, $15.20 a square foot in property taxes, up 53% since 2001, according to research by the Studley real estate firm.

That bite is more than triple the national average of $4.48 a square foot for major cities, and it’s five times the average of commercial property taxes per square foot in northern New Jersey, resulting in millions of dollars of extra taxes for big companies The bottom line: Since 2002, total real estate tax collections in New York have almost doubled, from $8.6 billion to $16.1 billion — a rate of growth nearly three times the rate of inflation.

Even more troubling is that the city taxes have grown under Bloomberg, who constructed the city’s budget as if the housing and finance bubbles of a few years ago would go on forever. A previous IBO study estimated that the local tax burden in 1997 was 79% higher than other cities, but the burden then shrank because of tax cuts enacted by the Giuliani administration and the City Council in the late 1990s. Between 1997 and 2000, the burden declined by about 8%, before starting to rise again under Bloomberg.
Posted by Queens Crapper at 12:39 AM

I was born and raised in NY but taxes is one of the reasons I left. There was just no way I was going to be able to buy a nice home and raise my family.

do not forget that most of the democrat City Council Members
voted for these property tax increases also. in fact, you may have voted to keep them in higher n.y.c. positions. eg. Comptroller John C. Liu, (attention,he is coming).

they supported "downtown Brown" to win the U.S.Senate seat in Ma.

Lino, I have had enough of you. The topic is taxes. Not about taking a couple of examples of stupidity and applying it to an entire movement. Get back to the topic at hand and stop being a distraction.

There are many "Tea Party" chapters, and linking to one doesn't mean they are all the same, just like Hiram Monserrate does not represent all Democrats.

Not to worry...Bloomturd will be reaching into the pockets of the middle class (and it won't be for our dicks) to make up the luxury class' tax shortfall!

NYC wouldn't be in such deep shit if it canceled all of its boondoggle projects beginning with Willets Point and the Atlantic Yards handjobs!

Let EDC get porked in the ass like the rest of us!

Well crapper, you can not separate the issues of taxes &politics.

"IBO study estimated that the local tax burden in 1997 was 79% higher than other cities, but the burden then shrank because of tax cuts enacted by the Giuliani administration and the City Council in the late 1990s. Between 1997 and 2000, the burden declined by about 8%, before starting to rise again under Bloomberg."

Sure Giuliani and Co were able to pass some smoke and mirrors cuts, we had a resurgent real estate market just recovering from the 89-95 era, we had old municipal labor contracts that had been negotiated during the early 90s recession and, most important a booming tech sector (Silicon Alley) along with Wallstreet investors (I was one of them). Silicon Alley ig one and taxes are only part of the reason. Exorbitant office rents and foreign competition are the real and permanent reasons.

It's the same situation as with residential real estate, New York sold it's soul to the landlord/ R.E. industry and we are left with an increasingly bifurcated city at a time when a lot of what provided employment for working class people is either going away or won't pay as much in the future.

Bloomberg walked into the aftermath of that crash and 9-11. He didn't help things by giving those huge increases to teachers and the uniformed services. So much for the responsible republican businessman he claimed to be.

As for those tea party morons, where were they when Bush blew a hole in our nation's budget with a stupid and pointless war and gave us the largest deficit we had ever faced.

Well I can't answer that question. But they formed more recently and are opposed to higher taxes, which isn't a bad thing. With all the dumb, needless shit we spend money on in this country, state and city, I can understand the impetus for the movement.

Let's not forget that the Daily News was among the daily papers in NYC that ganged up to ENDORSE BLOOMBERG. And now they're all of a sudden concerned? Puh-leese.

Dude, I'm a tea party "moron".
Hold a degree in physics wih a minor in philosophy, and have been a working engineer/scientist for 35 years.

Ever study partial differential equations or perhaps eignvectors are your cup of tea.

Hold any patents? Design any systems? Ever create a computer language and a compiler.

Like, dude it's pointless to claim qualifications that can't be verified.

Since the subject is taxes let me be blunt, I pay corp, personal, property and occasionally cap gains taxes. I take every dodge and deduction my accountant can conjure and I still probably pay more than any commenting here.

Do I like hell no, but I still won't throw in with an organization that features such Cretans as Dale Roberts (bigot) Rep. Michele Bachmann (opposed census) and a host of crackpots whose motives I suspect are as follows:
1)Don't like a Liberal President
2)Don't like a Democratic President.
3)Don't like a (half) black President.

I don't know why NYC's tax structure is of much concern to someone who admits that he has not lived here in 25 (+) years.

( apologies to QC for hogging this thread)

thank you Q.Crapper ,i do not mean to go off topic but i must respond to LINO,THE LOYALASS.

one who expects the rest of the taxpayers to petition our government's out of control high spenders and high taxers, to stop bankrupting U.S. family's, is a COWARD.

the highest taxed states in the U.S are Mass.(aka Tax-achusetts,N.Y.State (n.y.c.) and New Jersey.

must we all go broke because you are a sick liberal?