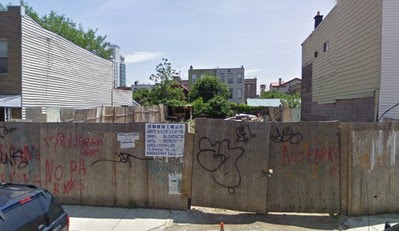 Dutch Kills Residents to Defend Community Against Developer at Board of Standards & Appeals Hearing. Press Invited.

Hotel developer Steven Bahar is asking the Board of Standards & Appeals (BSA) in an upcoming public hearing to overlook the problems and violations that plagued his hotel project in Dutch Kills on the basis of “financial hardship”, thus allowing continual construction of his hotel even though it will violate the new zoning laws that limit tall buildings.

The NYC Department of Buildings, for reasons ranging from unsafe working conditions to damaging neighboring properties, repeatedly stopped Mr. Bahar’s project, currently under construction on 27th Street in Dutch Kills, Long Island City. As a result of being shut down by the City, Mr. Bahar was unable to finish the foundation of his hotel before Dutch Kills was re-zoned in October 2008 to restrict the construction of tall buildings.

The Dutch Kills Community Advocacy Unit (aka The Unit) urges that this public hearing be covered by the media. We believe that Bahar will be the first of many hotel developers who will cry “hardship” to circumvent the Department of Buildings and the zoning laws to allow their stalled projects to go forward. We are confident that Mr. Bahar’s “hardship” claim will be turned down and the ensuing publicity will discourage other hotel developers from trying the same.

The Unit was formed in October 2009 as an advocate for the needs for the local resident of Dutch Kills. This was in the wake of the re-zoning process that was urged by Dutch Kills residents to preserve the residential ambiance of our neighborhood. The re-zoning was repeatedly delayed. During the delay, permits were issued to no less than 14 hotel projects, including Mr. Bahar’s, thus allowing out-of-scale commercial buildings to invade quiet residential blocks. A large portion of these hotels is in foreclosure; many are now half-built hulks, blocking the light of many Dutch Kills residents.

Our legal counsel, Stephen A. Harrison, Attorney-At-Law, advised us that the claim of financial hardship is often successful at a BSA hearing unless the community makes a good showing in protest of it. Thus we would like to stress again, the importance of the media covering this hearing. The local residents of Dutch Kills have to abide by the law and there is no reason why developers cannot do the same.

Hey, weren't these aleady okayed by Vallone, Gianaris, Onorato, and Community Board 1?

Arn't they going through another rezoning for the rest of the community board?

Think the folks in THAT part of Astoria will draw any hints from what happened?

Think the folks in THAT part of Astoria will draw any hints from what happened?
--

Sure, they will try to get their rezoning done faster because if word gets out that promises from planning ain't worth the paper they are printed on (sometimes - we do have to use that word so we look fair, don't we?) something might derail the dollar signs dancing in their eyes.

I notice the tower people don't post on issues like this. But criticize their crappy over priced developments built by day laborers and they blow a gasket.

Down zoning don't mean shit if it can be broken by a variance!

I don't get it. Just because of "financial hardship" this guy feels it's his right to run roughshod over the zoning laws. Where is the logic in that? Am I missing something here?

Pull the plug on this bum and any projects he has under construction.

Dont you folks see that by and large this entire zoning thing is a sham?

With all the spot variences, and little rules that provide the exceptions (that they dont tell you about) to say the outright disregard for the law (if you put up 8 stories after telling them you will put up 7 how many times do they make you remove it?)

Zero population growth is the answer.

Or making developers stick to a plan AND pay the infrastructure costs - which aint gonna happen.

I sat in on a DKCA meeting in 2008 and listened to John Young at city planning swear up and down that these "hotels" would never be converted to apartments due to "hardship." Now I see hardship being trotted out and a lawyer telling the community that unless they agitate, BSA is more often than not going to allow "hardhip" cases to bend the rules. The city serves up and DKCA spoon feeds the bulls**t.
Kudos to "The Unit" for giving Dutch Kills an alternative to the George & Jerry show.

Time to Dutch Kills Civic to come forward an explain how their role as self appiointed spokesman for the community, to say nothing of their alledged connections, let this happen.