We're getting soaked by Ratner 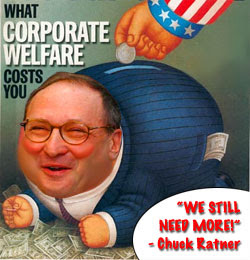 This whole Atlantic Yards boondoggle thing is still getting more amazing. Turns out, when Ratner bullied people into selling out by using the threat of eminent domain--totally standard and understandable--he also knew he could pay top dollar because he was using our own money to help ease his pain. My pain is formidable.

Just yesterday the ESDC, the state agency nominally running the show on behalf of private developer Forest City Ratner, finally allowed reporters to scan the "master closing documents" signed in private two days before Christmas, over a month ago.

Intrepid journalist Norman Oder describes his findings (the only other journalist there was Daily News reporter Erin Durkin). As usual, he does a thorough, detailed, and helpful job. Oder:

"Among the voluminous documents that were part of the Atlantic Yards master closing, first made available today, is one that confirms that, despite previous reports, New York City gave Forest City Ratner $31 million for arena land purchases on top of the $100 million it originally provided.

In other words, $131 million of Forest City Ratner's land purchases in the AY arena footprint, made under the threat of eminent domain, came from public funds.

And even if that represents a reallocation of city subsidies, rather than an additional subsidy--the evidence is murky--it opens up the possibility for additional city infrastructure subsidies at some point."

He also found that there are no low-income units in the plan.

And the FEDS don't do shit about bloomberg and quinn. This is why OBAMA fails, he is all talk. An empty suit.