Obama to first responders: DROP DEAD (but not til 2012) 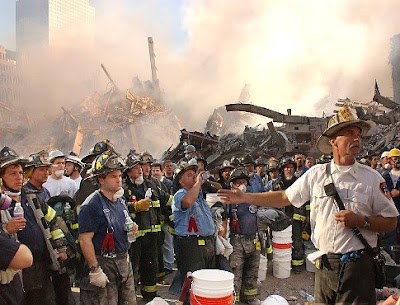 The Obama administration stunned New York's delegation Thursday, dropping the bombshell news that it does not support funding the 9/11 health bill.

The state's two senators and 14 House members met with Health and Human Services Secretary Kathleen Sebelius just hours before President Obama implored in his speech to the nation for Congress to come together and deliver a government that delivers on its promises to the American people.

So the legislators were floored to learn the Democratic administration does not want to deliver for the tens of thousands of people who sacrificed after 9/11, and the untold numbers now getting sick.

The 9/11 bill would spend about $11 billion over 30 years to care for the growing numbers of people getting sick from their service at Ground Zero, and to compensate families for their losses.

The legislators were shocked the idea was falling lower on the administration priority list than other parts of the war on terror and financial bailouts.

UPDATE from the Daily News:

The White House suddenly boosted funding for ailing 9/11 responders yesterday - pumping more government money into the treatment program than ever before.

Team Obama ponied up the cash only after outraging New York lawmakers with the news the administration won't back a permanent plan to help the dying Ground Zero responders.

The White House confirmed it will more than double the budget for treating ill responders to $150 million in 2011.

The abrupt reversal came after the Daily News revealed New York lawmakers were shocked Wednesday when Health and Human Services Secretary Kathleen Sebelius said the administration does not support an $11 billion permanent treatment plan.
Posted by Queens Crapper at 6:25 PM

of course he will , how soon he forgets

This is an misleading headline.

At issue were obstacles in American law to suing foreign governments and their officials as well as the extent to which people can be held financially responsible for acts of terrorism committed by others.

The Administration rendered the appropriate decision.

I'd rather my money go to impoverished schools. Our black children are our future.

Although the lawsuit argues that the Saudi government “intended” the 9/11 attacks to happen, the public record supporting that allegation is thin. There is no direct evidence that any senior Saudi official conspired with al-Qaeda to attack the United States.

The lawyers involved in this class action suit would have been the ONLY winners regardless as class action lawyers always are anyway.

i agree with the administration's decision. enough already

Now, if those first responders were illegal aliens, the president would fund anything that they needed. This country is charitable to every foreign government and criminal illegal aliens. This government does NOTHING for its CITIZENS, except tax them to death. No cost of living for senior citizens, but all the illegals get their free health care at Elmhurst Hospital. I just don't understand it!

The funny thing is that many people who get screened/treated are illgals or folks out of work.They say they are "construction workers" and no one says squat.Someone needs to do something about this!

The headline changed from last night . . .

More likely...it looks more like Asian Americans are our future.

Their academic achievements surpass Black children who seem more immersed in hippity hop "culture" than getting a good education.

It's not that I don't appreciate some of this stuff...but how many well paying hip hop DJ jobs are there around?

Once again...it looks like a race dooms itself to the ad hoc slavery of poverty.

Our first responders are the sufferring unsung heros who sacrificed their health to find survivors or remains of loved ones. Thanks much Pres. Obama and to our very own DOLT Rep Joe Crowley.

I'll be looking to avoid your name in the primaries this Sept - yes primaries as Joe Crowley will be forced to face off many Dem opponents who want to run against incompetency that Joe stands for.

Anonymous said "Our first responders are the sufferring unsung heros who sacrificed their health to find survivors or remains of loved ones. Thanks much Pres. Obama and to our very own DOLT Rep Joe Crowley.zzzz"

Let's say they decided to proceed with this lawsuit, AND they SUCCESSFULLY proved that the Saudis were responsible in part for the terror attacks - do you REALLY believe that they would PAY us anything?

AND if they should pay a little of it - a few million or a billion even - WHO DO YOU THINK WOULD BE PAYING FOR IT!?

The Saudis would ONLY DOUBLE or TRIPLE the price of oil to pay the few trillion dollar debt . . . . . OR - of course - just because they CAN!!!!

WHY does that need to be explained to ANYONE?!!