He'll be taking a different kind of joyride now... 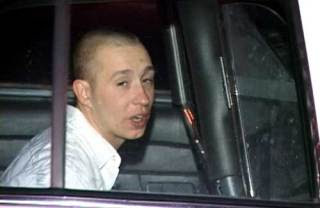 Kenneth Guyear mowed down Robert Ogle, 16, and Alex Paul, 20, last Feb. 1 as they crossed a street in Middle Village.

He admitted he had consumed five or six drinks and two Xanax pills before stealing the car, which had been left idling outside a deli with the keys in the ignition.

Supreme Court Justice Dorothy Chin-Brandt said she would sentence Guyear, whose blood-alcohol level after the slayings measured .126 percent, to the maximum term of 7½ to 15 years in prison.

Cops initially charged Guyear with first-degree assault, which carries a sentence of up to 25 years.

I bet he now wishes he were successful at taking himself out last year.
Posted by Queens Crapper at 12:32 AM

Should be 25-life for this scumbag.He'll probably be out in 11 years.

he belongs in GITMO for life.he is a useless bag of crap.

He should rot in jail and be raped every hour on the hour. What a waste of life! His mom must be proud?

Gee, what a compassionate group you people are.......
Guess you've never made a mistake in your life........
There are 3 families here who are destroyed, who would give anything to turn back time; your callous comment bring no comfort to any of them.....
Noticed none of you would leave your name.....

That guy only got 3 1/2 years and deported. Got drunk, as rumor has it, in a bar (part) owned by a very powerful local figures.

This piece of scum deserves no less than life behind bars. He and other members of his family were repeatedly picked up for drug offenses. This asshole not only hit and killed 2 kids, but he ran over one of them repeatedly while trying to dislodge him from his back tire, where the victim's body was stuck. Then he laughed about it.

There are 3 families here who are destroyed, who would give anything to turn back time

Nope, there are 2 families. The third is drug dealing scum with a rap sheet as long as my house.

Noticed none of you would leave your name.....

1. Interesting: who in his right mind would leave a car idling with the keys in the ignition? That's incredibly irresponsible.

2. I don't feel compassion for that piece of shit. If you make a "mistake" like getting drunk and popping pills and then brutally killing two people, your place is in jail, you deserve your life to be ruined.

It's amazing how soft-hearted some people are, guess we all should start feeling compassion for the drinking, raping, and killing scum of society. I've seen comments on this blog expressing compassion for muggers, swindlers, and other parasites saying they have to make a living somehow... Nobody expresses compassion for the plight of the common hard-working tax-paying middle class people...

When there's obviously troll stupidity going on please don't answer them. Just let me know and I will take care of it.

I hope the inmates rip him a good one!