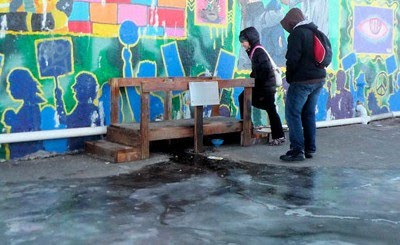 A leaky pipe might not be much compared to, say, whatever caused the Bronx Swamp to take shape—but for locals in Astoria their watery mess is both gross and hazardous. It allegedly makes 33rd Street, beneath the Hell Gate Bridge viaduct approach, a festering cesspool of standing water or (when it's cold) a festering cesspool popsicle! This thing has a nickname: the Astoria Scum River... and now that river has a bridge.

Astoria Scum River, as it's called, stretches the entire width of the sidewalk, and as winter approaches, the river ices over and becomes particularly hazardous to cross.

Astoria Scum River Bridge was constructed to offer Astorians an opportunity to safetly cross this hazard. The unauthorized bridge is a gift to the pedestrians of Astoria in the absence of successful municipal efforts to ameliorate the problem.

I like this MUCH better than his lame chairs-in-the-subway project. This one has bite! And it got the intended result.
Posted by Queens Crapper at 1:55 AM

This is pathetic - Peter Vallone should have jumped on this issue as building a bridge to cross the mess indicates to me the mess was there previously for a very long time. He should get after Conrail for all the other issues that affect the area (numerous).

Pretty sure Vallone did get after this. I also remember him going after Amtrak for falling concrete and for trash buildup just to name a few. But it is easier to attack...don't worry about learning the facts.

our friends at astorians.com are struggling on this one:

There's a story and better picture of the plaque.

It's hilarious that Vallone Jr. commended those for making the bridge, he should be embarrassed along with everyone involved that this hasn't been taken care of...and of course the scapegoat is Amtrak. Give me a break...they can't fine AMTRAK? And how much is Amtrak's responsibility and how much is the City's responsibility? IF they can't reach an agreement with Amtrak was it TOOOOO MUCH FOR VALLONE AND ALL THE BOZO POLITICIANS IN ASTORIA TO MAKE A LITTLE BRIDGE?

Thanks to the concerned citizens who made this bridge, it's a slap in the face to the politicians and a big help to pedestrians. You should get an "Outstanding Neighbor" award. Politicians in Astoria should get the "WE'RE A JOKE" award.

Reading what Vallone Jr. said reminds me of a skit that I'm sure a few of us may remember.....

^^^^that's a representation of the politicans in Astoria!

Peter is not wasting time on this garbage - time to go after rezoning and waterfront towers and finding a way to put 10,000s more people into a community that clearly cannot handle is current population.

A shabby part of a shabby borough only popular because its right accross the river.

The old timers kids have fled, so they are carefully looking over the north forty calculating how much they can suck out of the depleted ground, and the newbies, like newbies across the borough don't give a shit.

Astoria Pols Are A Joke said...

Anyone know how they spent their little nest eggs?

Could someone, anyone, have a few hundred for something this simple?

You can't turn the clock back.

Horace Greely had it wrong.

Actually, Peter Vallone is responsible for fixing this problem. His office contacted Amtrak and had scum river destroyed! No need for a bridge...