BloomKlein gets its way 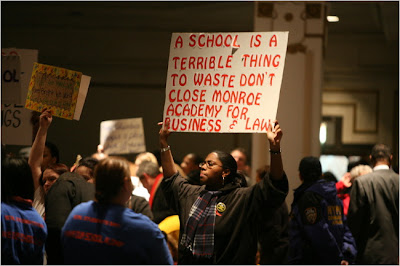 More than 300 speakers addressed the board, the Panel for Educational Policy, beginning at 6 p.m. Tuesday at Brooklyn Technical High School in Fort Greene. By the time the panel began voting at 2:40 a.m. they had heard a litany of complaints from hundreds of parents, students, teachers and administrators and just a handful of speakers who said they supported closing the schools.

But as expected, the panel overwhelmingly approved the closures recommended by the Education Department. The votes to close down the schools fell along political lines, with the appointees of the Manhattan, Queens, Bronx and Brooklyn borough presidents voting against the closings while each of Mayor Michael R. Bloomberg’s appointees approved them without question. Nearly every school shutdown was approved with an 8 to 4 vote, while the audience shouted “shame on you” and “disgrace.”

The panel has been widely criticized as a rubber-stamp to the Bloomberg administration and has largely held an obscure role in education policy. But under new laws governing the mayor’s control of the school system, the panel was required to make the final approval of closures of low performing schools, a centerpiece of the mayor and Chancellor Joel I. Klein’s effort to overhaul the school system.
Posted by Queens Crapper at 7:30 AM

Did they expect anything different?

We worked very hard to get the word out. In the case of Jamaica, at least, all the statistics were incorrect.

It's problematic in that the new schools are unlikely to take the kids who don't graduate in four years. They'll be shuffled to nearby community schools, which will find themselves on the chopping block next year (or the year after) as a result.

Reps of Queens, Manhattan, the Bronx, and Brooklyn voted no. You'd think these four boroughs would count for something, but under mayoral control, they simply do not.

Notice how, from this education board, to rent stablization board to the community boards, they may have the form of democracy on paper, but then do everything they can to make it useless in practice.

Didn't expect anything different, but it's still sickening. BLOOMBERG FOR TERMINAL CANCER PATIENT 2010!!!!!!!!

My question is where the hell does bloomturd and kleinass expect to put all these kids, after faze out? Dumb asses are to blame for ALL failing schools and the children should not have to suffer. Let's not forget MTA wants to cut free metro cards, so how the hell are the kids getting to new charter schools.. or are they going to use the closing schools and covert them into charter.. well he paid for his election and he apparently pays off all boards. LMAO and the state isn't giving any money towards education, so is bloomturd funding the charter schools also.

Some of them will be coming to the already overcrowded schools here in Northeast Queens.

Thanks Bloomberg & Klein. Keep it up! All of these students you keep screwing over will be pissing on your graves.

Where are they going to put the 10000 excess students?

If they are going to put them into the other schools, especially high schools there are 3 problems:

1) overcrowdedness (obviously)
2) these kids are from schools that way underperform in scores. So that means if they enter into other better high schools, they will drag the grades down overall and infect the better schools!
3) If gangs are in the these underperform academies, then when they go to the other better schools, they will infect those schools. No parents will ever want that.. especially in schools like Fresh Meadows and Bayside.

Nearby, John Bowne and Martin Van Buren got Cs this year. While my school, Francis Lewis, got an A, we did so by the skin of our teeth, and we're two miles away from Jamaica.

There has been a clear pattern of troublesome or unlikely to graduate kids being sent to nearby schools, whose figures then take a nose dive--just like Beach Channel is going down two years after Far Rockaway.

This is the systematic destruction of NYC public schools.
It's becoming pretty obvious even to noneducators what Bloombutt wants to do.
That PEP meeting last night was a joke. There could have been 5000 people there yelling at Kleinturd. It would not have mattered. Their minds were made up. I wonder if there is anyway to go after the mayor's appointed 8 members make them accountable for their decsions. Do they even speak at these things, think or even digest anything that is said to them?

I honestly believe there were meetings before the vote last night and it was already decided. They were just annoyed they had to sit through all those parents, teachers and students' complaints.

The one thing I would really love is for one of those trashy, welfare-collecting, black moms with gold teeth to get up in Klein's face and scare the sh#@ out of him, like I saw happen in my school when I worked in Brooklyn when the parents would come
to "fucking kick the shit outta you".
Thankfully never happened to me but witnessed it several times.

the social engineering so-called education system in n.y.c has been a disaster for fifty years. this attempt to "fix" it will also fail.

as long as the left-wing is running it,expect more disaster. you can take the horse to the trough,but you can not force it to drink. socialists will keep demanding more tax funding,but it will surely be wasted.

We can all sit here and blame Bloomberg for this retarted idea, but he is unfotunately not the one to blame (the most). The morons who voted him in by the thousands, and the thousands who did not vote in the mayoral election are the ones to blame.

Im sure that those who voted for Bloomberg and did not even vote at all are now the loudest protesters. The majority of the city voters wanted bloomberg and they got him, so now we have to live with the consequences. Did anyone think it was really going to be different?

A school where the majority of the students are black is closing! Impossible!

As bad as Joel Klein has been for our schools, the true master behind the corporate model imposed on our schools is billionaire Eli Broad.

YES by allowing rap and hip hop music to dominate or culture we have dumbed down our kids, so they are not much better then animals.

This is the systematic destruction of NYC public schools.

the social engineering so-called education system in n.y.c has been a disaster for fifty years. this attempt to "fix" it will also fail.
as long as the left-wing is running it,expect more disaster. you can take the horse to the trough,but you can not force it to drink. socialists will keep demanding more tax funding,but it will surely be wasted.

What? This is not a nasty left wing idea, its a right wing private enterprise corporate way of running schools. And these constant tests in schools are modeled on No Child left Behind.

Some of the best public schools in the country are in California, Maryland, and Minnesota.

can you name one chancellor of n.y.c. public schools,in the last fifty years, who was successful in graduating 90% of the so-called students.

if there was,was not the data "fixed"?

we should force bus the students to Cal., Minn., and Md.

if the better schools are in Md.,Cal., and Minn. , then bus the failing n.y.c. "pupils" there.