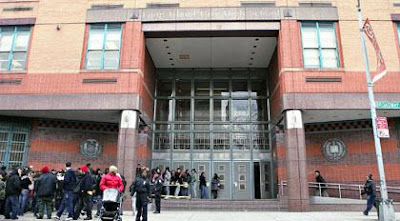 Consistently low graduation rates at Grover Cleveland High School in Ridgewood and Long Island City High School and Newtown High School in Elmhurst have placed all three institutions on the list for state and federal funding that would either completely make over the schools or close them entirely.

The state-issued list of 57 schools with graduation rates below 60 percent or consistently low scores on state English and math exams was released last Thursday. It includes 10 schools in Queens.

Newtown’s four-year graduation rate for the 2008-09 school year was 52.6 percent, according to city Department of Education statistics. LIC High’s was 56.1 percent.

Grover Cleveland HS’s was 54 percent. None of the schools had state test scores low enough to make the list alone.

The city is now waiting for the state to set a deadline for deciding how to address the problem schools. Their options include redesigning the schools, converting them to charter schools, leaving the current school structure in place while state funds are devoted to improving student statistics or closing the schools outright. 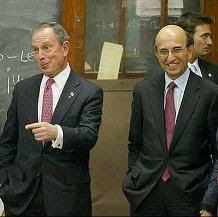 Seriously... 10 out of the 57 crappiest high schools in the state are in Queens? What does that tell us? How many in the rest of the city? According to the Daily News, it's 34.
Posted by Queens Crapper at 1:55 PM

Bloomberg is a prick, but I won't blame him for schools that have been failing miserably for decades. This whole idea of closing these schools however, is idiotic, and this rests ENTIRELY on his shoulders.

It all makes sense now!! Set the schools up for failure by eliminating school boards, implementing poor "curriculums", inept administrators, rid the system of veteran(troublesome) teachers, alter stats etc...
to pave the way for charter schools.

This was the plan all along!! I can't believe it didn't hit me before.

Something tells me that these schools aren't going down without a fight.

no it doesnt rest on his shoulders. they want the schools to fail so they can privatize (ie no unions, crap wages, no pension, etc) would someone here please look up the no childleft behind act? i brought this up a few posts earlier, yet no one is willing to do the diligence...brain dead america...keep on rollin'

hi prima- congrats for finally taking the red pill. I hinted at this a few posts ago. Occam's Razor...

The 2nd ethnic cleasing of Flushing is upon us. Something like 20% hispanic 30% asian 40% white 5% black and 5% other is what they are looking for.

what the hell are you talkin bout willis? whats with the percentage breakout? do tell...please

social engineering vs. reading,writing and arithmetic =
55 to 60% non-graduates. a socialist/marxist agenda.

the sad truth is that these schools are comprised mainly of black students. a teacher I know said this a few years ago, that the testing Bloomberg has been pushing was extra work for the teachers. But the testing was merely designed to get schools to close.

now instead of school to prison, is it gonna be straight to prison?

At that last comment, not all the bad schools listed here are because of black people. Thank you for saying that ignorant comment for us to now know how racist you are. Cleveland for example, is mostly Hispanic and is around 20-25% white. Blacks are only 5% of the population of that school so that statement just got completely thrown out the window.

I'm a former NYC high school teacher. I say close these schools. Students are lazy and could not care less. They are a waste of taxpayers' dollars. Yeah maybe they'll end up in prison. So what? These schools are only wasting tax dollars AND prolonging the trip to prison (if they wind up there). You can't MAKE PEOPLE CARE. You have kids in China fighting for a place in schools. Here we give the students every opportunity and they treat it as garbage. The high school I taught in GAVE students MONEY to attend SAT prep classes. It was mostly blacks and hispanics. What can be said? Statistics are statistics they don't lie.

Part of the problem is lazy or incompetent tenured teachers. The other part is inferior urban students.

Its not about race... it's income

All those schools contain students who come from families who have low incomes. Children who come from low incomes have rougher home lives/ more distractions. That translates to less parenting because their parents are out working trying to make it day to day. In turn the kids aren't pushed and get the help and support from home. Its a snowball effect... to learn more take Urban Studies classes at Queens College

But because this is Queens Crap.. Blame Bloomturd!

If the Board of Ed dropped English as a Second Language and taught these kids English, maybe they would have a chance. They coddle these kids and translate every form in every language, at taxpayer expense. They need to go back to the 3 R's -- Reading, Writing and Arithmetic. Immerse them in English and go after the parents by cutting their welfare if their children don't attend school. Make the parents accountable for a change instead of blaming everything on the teachers. If they close these schools, where are they going to put all these kids? Dump Klein and start from scratch. NYC Schools used to be the best in the nation, and they still can be if people go back to the way schools were run 30 years ago.

This is beyond ridiculous. We just went through this with 19 other high schools. Now there are ten more on the borderline -- and that's just in Queens.

Eventually every high school in the city will wind up on this list for closure or makeover. The fix is in, apparently.

I'm not sure who to blame for this but I'll tell you one thing...

I always put most of the blame on the adults. It usually belongs there. Parents, teachers, administrators and most of all politicians.

Where would you like all the kids from the Astoria/LIC area to go to school? LIC is the zone high school from south of PS 171 to the water to most of the way up to Steinway Street--spread out both directions. And let's not forget all the new skyrocketing multiplexes in the area in the last 5 years. Bloomberg needs to make education a priority if he really wants to do anything. No metrocards for these kids to get to school and now, no schools for these kids to go to. Why don't we prepackage an McD's application, a knife and a but of drugs when kids end 8th grade and tell them that these are there only paths in life--unless they're rich.

public schools for the most part are tax payer funded babysitters

my tax dollars are not for your kid

No one mentions the fact that some of these school have administrators that are not licensed or certified as counselors that are supposed to assist our kids - I know this for a fact - happening in IS25 which is a stepping stone before high school - These people don't care and should not be in these positions.

Counselors???
They're not even certified/licensed educators!!!

BloomKlein are running the schools into the ground.

They won't stop until they close down EVERY school in our city in favor of charter/smaller schools.

This is all about to impact Northeast Queens(even more than it already has).
Wait until the Special Ed. and ELL(English Language Learner) kids make their way to Bayside HS, Cardozo HS and Francis Lewis HS more than they ever have before. Those kids will bring down the scores of those schools and BloomKlein will declare those schools should be closed as well. Domino effect. The parents will go apesh#@.

I've said this all along. Unless the PARENST make a stink(a real stink), BloomKlein will continue their butcher job of our schools.

if you check the d.o.e. website,i think you will note that the Special Education groups, math and english ,scores are not included with the general population.

It's the building themselves at fault! Raze them, rebuild and watch the graduation rates soar back to 100% WOW! Sounds like a developer proposed solution!

Jamaica high school is already closing. If they close John Adams, August Martin and Richmond Hill, then where would the kids living in jamaica, richmond hill, and ozone park go to? Long Island? They would be stupid if they closed down the schools. Just kick the lazy students and teachers who do not care out and watch the rates go up. Trust me I know, I graduated from Richmond Hill.

where will the displaced "students " go? far enough away so that the school bus company's and the politicians can drain a great amount of taxpayer dollars from the $20 BILLION PER YEAR N.Y.C. Dept. of Education budget.

watch your taxes go up up and away.

P.S., I.S.25 in Flushing, Auburndale, Bayside area is now the location for the WORLD SCHOOL OF JOURNALISM, A HIGH SCHOOL.

the sixth grade pupils from local elementary schools have been forced to go there,because they were overcrowded. could you guess why ?

the graduation rate that they're pointing to means that the students are taking more than 4 yrs to graduate. so what!
a lot of people take more thant 4 yrs for college too.
there's no need to shut down these schools.
how about addressing the issues instead?

At the former NYC High School teacher, thankfully you are no longer teaching our students. You have given us a clear indication as to why certain black and hispanic students do poorly. You were teaching them. Its teachers like this within this thread that affect the graduation rates. If you dont believe these kids can make it and dont teach them like they can then most likely they will fail. As someone pointed out, you who probably never had to deal with the issues of gang violence, poverty, lack of parental guidance in your household, clearly does not understand that these students start at a disadvantage. And yet a good number of them still manage to do well despite the harsh environment they live in. Those students should be praised because its easy to fall into the crowd and you shouldn't fault the students who struggle when there are rich kids who have all the opportunities waiting for them and they blow it.

this is horrible there are over thousands of kids in those schools. where are they going to go? how about those kids (8th graders) who applied to those schools this isnt fair at all. the schools should just change teachers the arent doing their jobs if the students are failing