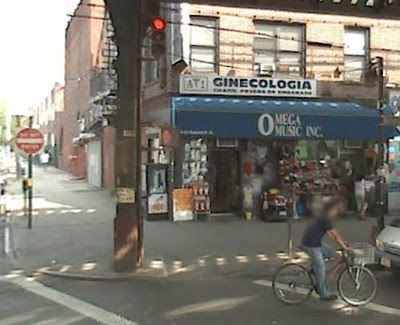 Queens Clinic Under Scrutiny after Woman Dies Getting Abortion

NEW YORK (1010 WINS) -- An investigation is underway after a woman died undergoing an operation, believed to be an abortion, at a clinic in Queens.

The 30-year-old woman bled profusely after an artery was severed during the procedure Monday afternoon at A1 Medicine at 95-45 Roosevelt Avenue in Jackson Heights, sources tell 1010 WINS.

The woman was rushed to Elmhurst Hospital where she was pronounced dead.

The clinic advertises plastic surgery and gynecology on a sign outside of the office.

The incident is under investigation.
Posted by Queens Crapper at 5:11 PM

I guess it was a bad idea for this mother to kill her unborn child.

Adoption would have worked out better for the mother and baby.

Hopefully this dreadful situation will discourage mothers from deciding to have their unborn child killed......but probably not.

You can't kill what's not born. However, women of child bearing age are, last time I checked, absolutely, positively born...nothing scientific nor theological would counter that. They have a right to deal with whatever is happening to their body in whatever legal manner they choose. It may not be your cup of tea nor mine.

But aside from that, this "clinic" sounds fishy. See what the investigation shows.

Actually, you can kill what's not born. Ask Scott Peterson who's on death row for killing his wife and son.

Abortion is protected under the constitution.

But in any event, what's disturbing is that in this city/state/country with very liberal abortion "rights" laws, women still die from this barbaric procedure. Maybe it's time to stop?

This has what exactly to do with the fact that a woman died in Jackson Heights at a clinic that probably doesn't have the right to perform them?

Please don't turn this into abortion debate. The issue here is that Jackson Heights is full of third-world charlatans and abortionists. I'm not a woman, but I'm appalled by thought of women having abortions and other invasive procedures in that shabby, filthy building on the picture. This is probably where the prostitutes advertised by the little men below the tracks have their abortions.

The next thing they're going to do is offer abortions at the meat counter at the nearest supermarket.

That sucks... next time keep your legs closed! Poor thing... prob didn't have health care 'cuz Obama the savior is continuing all of these silly wars... ahhhh silly economic allocation.

Hey this is about a death - was this place above "Mega Music" a real clinic with real Doctors? I bet we find out no legal Doctor was present at the time or that the clinic is not medically legal at all.

It's tragic, isn't it? Someone at this shabby-looking abortion mill was busy chopping up a fetus and accidentally chopped one of the mother's arteries, leading to her death.

Hey Better NYC, Your opinion, so far women still have a choice. How many adopted children do you have?

Let people make their own decisions and stay out of their business.

This could have happened with a different type of surgery this is just out and out horrible. Your compassion only leads me to believe your a really good christian.

What a good story.

The plan was to get rid of one useless life, but ended up losing TWO useless lives.

This should happen more often!

Back in the day, his worthless fetal remains would have been yanked out by a hanger.

Had this women chosen to carry to full term and put the baby up for adoption, the mother would be alive today and the baby would have been given the chance to live its life.

Is it so important to uphold a woman's right to choose that it should come at the expense of a baby's life???

Wow, that's a tough price to pay for a baby.

I thought parents were supposed to make sacficices for their kids, not the other way around.

To me, abortion the ultimate act of selfishness.

But it doesn't matter what I think...it's all perfectly legal.

After selfishly having sex without protection.

Can somebody investigate this place? I could not find any information whatsoever on the doctors practicing at that location.

The only thing I found is this:

Apparently that clinic has got Joint Commission accreditation.

Back in the day, his worthless fetal remains would have been yanked out by a hanger."

It's a good thing you don't have a job where you come into contact with impressionable young people everyday. What next? Hitler Youth Movment maybe?

Horrible story. Stands to reason that only hack "doctors" are attracted to this gruesome business. No Doctor worth his/her salt would violate their Hippocratic Oath by "playing at God" the way abortionists do.
Rest in peace, dear ones. The ones you left behind still love you since Love never dies.

Nothing that results in the death of the innocent should ever be described as "health" care. It's monstrous.

"Planned" parenthood has done an exceptional job in their deception. At our house we'll be watching the "Super Bowl" and looking for the Lebow 30 second spot. Thank God for the Lebows and their Life choice. May God Bless them and all here.

PEOPLE R SO JUDGEMENTAL . YES IT'S NOT RIGHT TO HAVE AN ABORTION N KILL A UNBORN CHILD . I KNEW THIS LADY N SHE ALREADY HAD 4 KIDS. HER BABY DADDY WAS A DEATH BEAT DAD. N SHE WAS ABOUT TO LOSE HER HOUSE. SHE THO SHE MAKE THE RIGHT DECISION BY GETTIN AN ABORTION BECUZ SHE COULDN'T AFFORD IT. WHICH CUZ HER DEATH SHE IS NOT A MURDER. SHE IS HUMAN. N US HUMAN MAKE MISTAKES . NOBODY PERFECT. WHEN SHE MAK THE DECISION TO GET AN ABORTION SHE WAS THINKIN ABOUT HER OTHER KIDS HOW SHE WAS GONNA FEED THEM AND WORK. YA'LL SHOULD BE WORRY ABOUT THAT FUCKING DOCTOR THAT TOOK HER LIFE AWAY. I THINK IS OUR DECISION TO BRING A BABY INTO THIS WORLD. LET HER SOUL REST IN PEACE.

well i few months ago i was planning to do an abortion .. at taht time i was 16 and the secretary told me she would charge me $350.. what i didnt like about the docter she didnt even ask me my ahe or if i had any health issues or anylike that. the only thing the docter wich was a woman just told me aww it a easy process she had me wated for 2 hours then she told me come to the room and pull pants down.. i react and i decided not to do it there cause it looked like unsafe place and the docter was laghing and giglying with the secretary

It is disheartening to read comments that have divisive comments rather than comments of concern for the community. I am talking overall not single ones here and there.
We should all be happy for living in a country that has choices, but where we often thrust our own agendas onto the lives of others, which in almost all cases, is done without having one speck of information about their situation.
I am a man, but I do feel that women have abortions for many reasons, some I may agree with and some I may not. But that is not the point, the point is that it is not my decision to make. My concern is that individuals should always have the option to choose and, as in this case, to obtain an safe abortion, if that is what the individual wishes.
I have often heard people criticize others, and subsequently they find themselves in the same situation expecting people to understand. In life we don't always need to understand, but rather accept and respect. Benito Juarez said: Respect for someone else's rights is peace (el respeto al derecho ajeno es la paz). I agree with that.
For example: Let's assume we don't want abortions. Wouldn't the logic then be to have effective sex education starting at an early age, where the conversation is initiated by parents with appropriate language to use with kids. The reaction to this idea is always, but we should not talk to kids about sex, it gives them ideas. Well, whether we give it to them or not, trust me they will think about it, or someone else will give them the idea. And outside of the house, chances are that they will get the wrong information. By the time parents/guardians find out about it, they have a mess in their hands. A mess that adults never take ownership of, then they blame it on the child, who supposedly can't process information too young, right? This is just one simple example.
My point in this story is that we should all ensure that appropriate medical care is available for whomever needs it. We spread the word of gossip on irrelevant things, but yet when it comes to sharing information that a clinic such as this is bad, no one ever spreads the word. Everyone casts the stone, but no helps the situation in any way whatsoever.
I urge our community to please rally together and let's look out for our own fellow residents. We can together make our environment better, but we all must do a little. Instead of judging, let's help. If each of us is 100% perfect, then by all means go ahead and judge. But I have yet to find one person in this world who is perfect, and I'm not that young. If all have heard that if we are not part of the solution, we are part of the problem. Is each of you part of the solution?

Thou shall not Kill

When will they humble themslves before GOD and bow down to his will?