An end to popup homeless shelters? 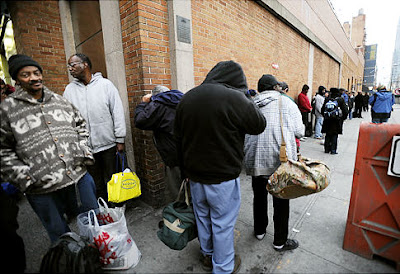 Bedford-Stuyvesant residents and merchants are fuming over a new residence for alcohol and drug abusers that suddenly opened earlier this month without any community notification.

Neighbors said that on Jan. 1, about 20 men arrived at the two-family home in a beat-up white truck and moved in with used mattresses and bed frames. Since then, the men have been seen discarding used beer and liquor from the home, according to neighbors.

"Why would you bring a shelter on a block that has a history of drug issues that we're trying to kill?" said Community Board 3 chair Henry Butler.

Butler has organized a meeting tonight with representatives from various city agencies to determine whether the building - which has been slapped with a temporary stop work order for building without a permit - is even safe to house the tenants.

Same situation up in the Bronx...From the Daily News:

A Manhattan judge tossed out a suit by a group of Bronx merchants that would have forced the city to conduct a comprehensive study of a neighborhood before opening a homeless shelter there.

The Westchester Merchants Association argued that the city Department of Homeless Services should conduct a "fair share" analysis of an area to see whether it already was saturated with social services organizations before a homeless shelter could open.

But the merchants did score a victory two weeks ago, when the department adopted new policies mandating that a homeless shelter provider must first contact the local community board before setting up shop. At the time, one Westchester Square merchant called the change in guidelines "a partial victory."

The department has opened several shelters and "cluster sites" in the Bronx in the past six months, causing friction with borough residents and businesses. District managers for local community boards complained that they often learned of shelter openings after the fact, and sometimes through secondhand channels.

"The effect of this decision is going to affect communities throughout the city," said John Bonizio, president of the Westchester Square Merchants Association. "They don't consult with the community boards. They find a spot and put it in."

Local elected leaders and merchants contended the shelter was opened "in the dead of night," without any community notification.

So what? This is what we'll face instead - From Riverdale Press:

A month after Urban Pathways first proposed a supportive housing facility on Cannon Place, residents are still faced with more questions than answers.

The proposed development is for a 90-unit building on a rocky, sloping vacant lot on Cannon Place, a neighborhood that traces its history back more than 100 years, with streets so narrow parking is only allowed on one side. The facility would be comprised of 40 percent low-income housing and 60 percent housing for formerly homeless individuals with histories of substance abuse or mental illness, or both.

Despite the huge public outcry, with more than 100 people at each of two Community Board 8 Land Use Committee meetings, the project could still proceed without board approval, said Frederick Shack, executive director of Urban Pathways.

Urban Pathways currently has three other projects in various stages of development, including two others in the Bronx, in Community Boards 3 and 5. In two of those projects, the group’s proposal was rejected by the local board, but they chose to continue regardless.
Posted by Queens Crapper at 12:40 AM

I suggest fairness and open a popup homeless center down the block from Trump Tower on Fifth Ave.

wow they keep going from town to town with these damn shelters. sounds something like the one in elmhurst they tried to open without input from the community. who is funding these shelters? it better not be nyc and our tax dollars..

Of course it is with our money. We are our brothers' keepers.

Re: "our brothers' keepers"

"And Cain talked with Abel his brother: and it came to pass, when they were in the field, that Cain rose up against Abel his brother, and slew him. And the LORD said unto Cain. Where is Abel thy brother? And he said, I know not: Am I my brother's keeper? And he said, What hast thou done? the voice of thy brother's blood crieth unto me from the ground." Et cetera, et cetera. - Genesis 4:8-10 (King James Version)

The LORD never answered Cain's question, but danced around it.

Those homeless bums won't use the shelters. They prefer the subway.

lmao, george you always amuse me..

Linda, that's great. But do I stimulate you intellectually? Are we indeed "our brother's keeper"?