Woman stabbed to death in Flushing 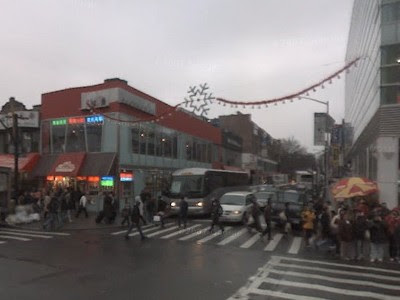 A dispute over a mahjong game in a Flushing apartment last night led to the fatal stabbing of a 46-year-old woman, police sources said.

The victim was found with wounds to her stomach in the second-floor hallway of the building on 40th Road near Main Street at around 7:35 p.m.

"I heard yelling. She sounded like she was fighting with a man, then nothing," said a neighbor, Shin Yao.

The victim, whose name was not immediately released, was stabbed just before 7:30 p.m. on the second floor of 135-32 40th Road, on a block with electronics shops, hair salons and restaurants. She was inside an establishment that neighbors described as a foot-massage parlor, above a Chinese restaurant.

It was unclear if the woman worked in the establishment or lived in the building, which has apartments on the second and third floors. The police said she was stabbed several times after a dispute. No one had been arrested as of Tuesday night.

UPDATE: The suspects are the victims neighbors, and apparently she was not playing MahJongg
Posted by Queens Crapper at 5:45 AM

I don't play the mahjong game, that much anymore. But when you play by Vietnamese rules, death is the penalty for cheating. Hey, its a very serious game.

A woman playing Ma-jong in her job at foot-massage parlor, above a Chinese restaurant was stabbed to death.

Anonymous said...
A woman playing Ma-jong in her job at foot-massage parlor, above a Chinese restaurant was stabbed to death.

The 2nd ethnic cleasing of flushing (downtown) is coming.

The first one took place in the early 90's and got rid of most the black, puerto rican and darker skin people and replaced them with asians.

Now the second wave is coming and it wont be as serious as the first cleasing but main street will be looking a little more... how can we say Vanilla-ish.

I already see some hipsters on main st late night on the weekends.


You mean, seeing it return to the people who established the area in the first place?

Yeah, that would be SO horrible and unfair.

Vanilla-ish? I don't see how you can blame whites when a stupid dispute among asians over a game of mahjong turns deadly.

Obviously, the update came after these comments above.

She was a job recruiter, not playing mahjong.
The guys who stabbed probably wanted her to help them find a job or something.

Playing mah-jongg was a fad in in the US in the 1920's. Does anyone know why?

whatdoyoumean have a good point.

It just shows that how many ignorant people are in Queens. Queens is ghettoish, compare to Manhattan. Look at the people and compare them with Manhattans Midtowns and you can see the difference (btw, I'm talking about comparing the style and attitude, not race)

Midtown Manhattan is made up of people who commute to work, including people from Queens. All of you morons really need to stop generalizing.

I don't think wanting to be left alone was a substantial reason for this woman to be killed, if that's all there really is to the story.

This murder story looked simple, too. But now it doesn't.

Okay, here's the deal: For whatever reason, this guy stabbed some woman who may or may not deserve it. Regardless, he shouldn't be out on the street. Considering where they both live, both of them probably shouldn't be in the USA at all. Now she's dead, and he's costing us alot of taxpayer money. Probably neither one is a taxpayer themselves.

Whatdoyoumean - if she was stabbed in midtown, we would be complaining about drugs and homelessness instead of nationality. Either way we are pointing out cultural differences.

George - I'll bite: Why? I happen to like mahjong myself.

Anonymous 4 - LOL - ethnic cleansing - true - I always thought of it as a silent invasion (and they won) and everytime I'm in Home Depot on Avery - there are always hipsters shopping in there.

I don't know why myself. It just took off as a craze.

ANONYMOUS: You mean, seeing it return to the people who established the area in the first place?

The Matinecock are coming back? Or do you mean the Canarsee? Or the Marsapeague? Or the Rockaway?

Nope, civilized white people. They established the neighborhood. The tribes of Indians didn't found a town. They were hunting and gathering and fighting with each other.

When Jewish housewives used to get together for mahjong games in the 1950s ("1 crak...2 bam...pass me a schtickle of herring") maybe there was a little polite cursing if someone lost and a little indigestion but WOW this is sick!

Maybe these Chinese were playing for serious money (like high stakes poker games in the old west).

So a gambler pulled a knife on a cheater instead of a hideout gun.

As the "great recession" continues we'll be seeing an increase in crime as was evidenced during the Great Depression"!

I guess the 109th PCT can (LOL) handle it...I mean if they can get out of the illegal whore and gambling house protection business!

"The Metoac [the Indians of Long Island] were an agricultural people who supplemented their diet with fishing and hunting. Although they lived in villages, there was regular seasonal movement in a fixed pattern to take advantage of the resources. Villages were generally small and rarely fortified until they were living under constant threat after 1630. Although they sometimes joined in loose confederations, their lack of a strong central authority before contact was a clear indication there was little intertribal conflict." - Lee Sultzman (More info HERE. I found it through the website of the Connetquot Public Library so I assume it's more or less accurate.)

The Indians apparently did have some kind of village near the site of present day Flushing and lived a basically peaceful and prosperous life, farming, hunting, and manufacturing high quality wampum, which was traded as far away as the Black Hills. This began to change when the Dutch started to move in and the place went all to hell.

Too bad about the dead lady.

Yes and all Indians are Americans now. They didn't die off, they intermarried. Your point is what?

Why the hell do you morons divert away from the topics all the time? Is a dead woman not interesting enough for you to comment on unless someone throws a politically incorrect comment out there for you to focus on?