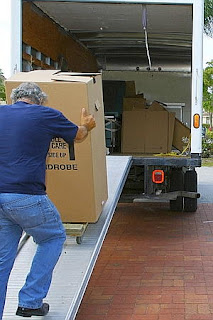 New Yorkers are fleeing the state and city in alarming numbers -- and costing a fortune in lost tax dollars, a new study shows.

More than 1.5 million state residents left for other parts of the United States from 2000 to 2008, according to the report from the Empire Center for New York State Policy. It was the biggest out-of-state migration in the country.

The vast majority of the migrants, 1.1 million, were former residents of New York City -- meaning one out of seven city taxpayers moved out.

What's worse is that the families fleeing New York are being replaced by lower-income newcomers, who consequently pay less in taxes.

Overall, the ex-New Yorkers earn about 13 percent more than those who moved into the state, the study found.

But they will be replaced with a million more vibrant, diverse, low wage workers by 2030. Doesn't that count for something? Hey check this out from the NY Post:

If he wins a third term, Mayor Bloomberg promised yesterday to transform the city so it'll have the best public schools in the nation by 2013, a far lower crime rate, better mass transit and more waterfront and park options than ever.

Eight days before Election Day, Bloomberg outlined a vision for the future that focused on key projects and quality-of-life initiatives undertaken during his first two terms, from completing the No. 7 subway train to the Far West Side to opening two miles of new parkland along the Manhattan side of the East River.

Yet more parks for Manhattan, eh? How are you going to do all this with a shrinking tax base and the impending collapse of the commercial real estate market, financial genius?
Posted by Queens Crapper at 12:41 AM

Up the bottle deposits to 50 cents and 25 cents will get you 5 minutes on the parking meter. Raise the bridge tolls to $6. The answer to all our fiscal woes is: incrementalism.

The lobster: Say, isn't this water getting a bit warmer?

The camel: Gee, those straws are getting a tad heavier.

In addition to the obvious fact that the Post is a polarizing shitrag, there are a number of factors involved here.

First: Age. Alot of of the older residents (WW2 and 1950s) retired in the late 80's and by the early 2000s were simply too old to maintain their own homes and left for retirement communities -mostly in the southern part of the country. In Queens, most of the older customer our restaurants had at the beginning of the 1990s have left the borough. That pace really picked up in the last 8 years.

Recession. Not much to say here...except that Queens has probably not felt percentage-wise the level of departures that Manhattan has. My own apt building had a record number of empties (14) earlier this year. Most due to lost jobs in the financial sector.

Then we have this quote:"What's worse is that the families fleeing New York are being replaced by lower-income newcomers, who consequently pay less in taxes."

The Post is up to it's usual tricks here --make it look like "they" are taking over. Typical republican demagogues.

The bulk of those that I have seen coming into NYC are actually from other States and they are young thus with less income.

If this shitrag REALLY CARED about the flight of what their dwindling readership considers the "right people" -they wouldn't be in lockstep the upstate republicans and their consistent drive to sate the greed of landlords by gutting rent regulations.

Next, you can not discount the aftermath of the 9-11 attacks. Everyone now knows that NYC..Manhattan..is the primary focus of islamic terrorists. For several people I have spoken to, this was the last straw that pushed their decision to relocate.

There are several smaller factors too. Since 2000 over 35,000 blacks have left NYC..mostly for the south.

The closest that article came to telling the truth:

Gee..could it be cheaper housing? Maybe if rents hadn't escalated so much after vacancy decontrol (Potaki-Bruno) we would not be driving so many post readers away..

I know I've just gone to contract on my parent's hiuse, and I'm trying to talk my wife into selling ours. I have been given permission to buy a vacation/retirement home, and even though I love the Catskills (it's 2nd home) I'm considering "elsewhere" just to get away from the taxes here in NY

Lino: The "shitrag" didn't say it, it was reported in every paper. Plus, stats back it up. If we didn't have foreign immigrants coming in (many of them illegal), our net population growth would be negative. This was in a study published by CUNY. You can't deny that our taxes aren't the main reason people leave NYC. I am well below retirement age and almost none of the friends I went to grammar school with still live here.

Well, I guess we can thank Democrats, who would tax and spend us into oblivion.

Well, at least in my dealings with people I can state that taxes have never come up as a reason for leaving. The reasons have all been; old age, better job, "family issues"-divorces, infirm parent etc.

Three of our partner/managers moved to Queens because of higher R.E. taxes in Long Island and one from NJ. Two to Douglas Manor, one to Bay Terrace.


In general I do agree that inadequately enforced immigration is a problem. But I am old enough (53) to have seen what, and who is most responsible for this..and their motivations.

I had just started in the restaurant business (as investor) within three years -all- of the former staffs, mostly black/Pr/Dom in everybody's locations had been replaced with Latin Americans.

The republicans did this "reform" not at the behest of "open borders" liberals..they did for business groups that wanted to batter the labor unions.

Now that the situation has gotten out of hand and people getting worried, the republicans and their mouthpieces are trying to blame others and capitalize using the old "invasion" tactic.

Gotta hand it to them, they can't manage a society, but they can manipulate people's fears and deflect anger from their own actions.

Right, but "better job" usually means more money that you keep, not send to Bloomberg. "Retirement" or "old age" - people used to be able to live comfortably on their retirement in NYC.

And I agree with you on Dems and Reps sharing the blame for illegals.

Blah Blah Blah
Y'all could either stop talking/blogging and take an action or else you are as useless as tits on a bull! Write letters, contact the media, complain to the appropriate agencies, etc. If you love this city, especially Queens, then get off your collective butts and DO SOMETHING ABOUT IT!!! Is there anyone out there who has the cajones to do as I suggest? Doubtful!

The major reason to leave New York City is the high rents and the high prices on basic necessities like food.

If you are not rich, they don't want you to live any more.

By the way pumpkinhead, der sheeple are now under my control! Nobody iz going to bitch.

Flushing has done the biggest 180 of all the neighborhoods in Queens. Something like Williamsburg but it's gentrificASIAN.

just where are all of these republican's that you are blaming hiding ,in queens? are they in the city council? are they boro. presidents ? are they queens assemblymen and senators, in n.y.s.?are they appointed to c.p.b's, by boro.presidents?lino,you are drinking the kool-ade!!!

why are the indicted and convicted politicians always dems?because you only vote for dems!!! absolute corruption ,in your time in queens.

Young with less income means lower income people you idiot! Reread your entry and think before you type.

I left NYC because of taxes. Next step is leaving NY state.

New York City has become a melting pot of non-English speaking immigrants. Our tax dollars go to support their large families. Take from the rich and give to the poor. Rome fell in a day and NYC is not too far behind.