RKO Keith's of Flushing to be sold 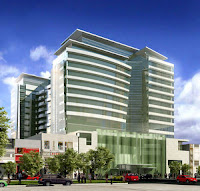 A Midtown-based real estate investment firm is in negotiations to take control of the troubled RKO Keith's Flushing Theater from Boymelgreen Developers by the end of the year.

Ventor Capital has agreed to purchase a $20 million note secured by the Flushing, Queens property located at 135-27 Northern Boulevard from Doral Bank, said Sam Suzuki, a principal with Venator, ultimately giving the company full control of the theater.

Investors affiliated with Venator are active in the Bronx as well, where they are in contract to buy 16 mostly rent-regulated apartment buildings owned by Ocelot Properties, after buying six earlier this year.

The RKO Keith note purchase would be followed by a so-called friendly foreclosure in which Boymelgreen would sign over the deed to the new owner without a protracted court proceeding, Suzuki said.
Posted by Queens Crapper at 2:13 PM

Help save the Keiths

Suzuki bought the old Lincoln Apartment house adjacent to the historic Bowne House many years ago.

They cut down the trees in the center courtyard and crammed infill residential units in its place.

Not meeting proper FDNY access for fire apparatus in the event of a fire...they were not granted a certificate of occupancy.

Those units remain vacant but are for sale.

Councilman John Liu had received campaign contributions from this developer.

Question:
Is this the same Suzuki that's buying the Keith's?

The landmark portions of the theater which include the ticket lobby and grand foyer are still relatively intact and its new owner must follow all regulations set forth by the New York City Landmarks Preservation Commission
as the Boymelgreen Organization had agreed to before.

These portions are required to be encapsulated during any demolition or construction to protect them from damage.

No demolition equipment or dangerous materials can pass through these spaces for disposal, etc. during the demolition or construction phase.

Workers must be fluent in the English language.

Seismographic monitors must be put in place to check for any damaging vibrations during all phases of demolition and construction.

These are but a few excerpts from a thick safety manual that was prepared by the LPC to ensure the protection of this historic treasure.

It can be examined at their headquarters.

I'd advise everybody who is interested to keep in touch with Community Board #7, the Landmarks Preservation Commission and the other historic preservation advocate groups such as the Historic Districts Council or the Landmarks Conservancy as I fully intend to do.

JERRY ROTONDI,
for the Committee To Save The RKO Keith's Theatre of Flushing Inc.

Please!!!!! This can NOT happen!!! The RKO Keith is as important to native Queens residents, especially Flushing, Whitestone, Corona, and Bayside just as the Empire State bldg is to Manhattan! This theatre is a rememberance and standing tribute to an era that is not even 'long gone by'. I lived through it and spent many afternoons and evenings there. My best friend's father worked the theatre as an usher when it presented Vaudeville acts. The demolition of this grand piece of architecture not only demeans the governatorial and representative leaders of our respected borough, but is a move towards ceding our heritage and beloved historical factions to the event of modern technology. Some forget that without our past philosophers and mathematicians, we would not have the advancements we enjoy today. You are depriving the youth of our nation from a look at a better time, when people got together for a movie, or a show and newsreel. How many young adults have seen a Marguis with an entrance to an elaborate lobby. The theatre itself with it's colliseum seating and starry sky ceiling all made for a fine afternoon of getaway from the norm.
Think, and think hard.
Do we destroy what we love and remember for a monetary value or simple solution? Or, do we rebuild and restore the once palacial theatre to the magnificent palace it once was for all people to enjoy.
For once, think of the people, and not your bank accounts.
You know you have plenty of available resources who have volunteered their services in the attempt for restoration!

As a boy growing up in Flushing, the Keith's was a magical place. I remember watching a double feature matinee with color cartoons sandwiched in between. This was in the days before color TV and these precious cinematic treasures were ingrained in my memories. The fact that our elected officials allowed this historical theater to fall into such a deteriorated state is criminal. With the changing demographics of the area, these insults to our collective memories are overwhelming and are likely to continue.

Get with it man, the real American culture has died.

We are all called consumers, and we don't consume enough right now ...(we are in a depression in case you don't know)

Yeah except what Jerry said has nothing to do with what inhabits that space, and the interior is landmarked.

We are also in a recession, not a depression and Domino's and Starbucks does not provide "hundreds" of jobs. A few dozen, maybe.

Yeah right! Let's put 10 pounds of shit in a 5 pound bag. I'll bet you won't rest until every square inch of Flushing has been developed. Serious TROLL!!!

Nowhere did I mention in my previous post that the entire theater must be precisely restored to its original state or use.

I referred ONLY to the preservation of the landmark portions which I now repeat...are solely the TICKET LOBBY AND GRAND FOYER.

They can realistically be incorporated into a new project.

THESE HAPPEN TO STILL BE OFFICIAL NEW YORK CITY LANDMARKS!

Our position from the outset since 1986 has always been the creative re-use of Keith's with considerations for whatever was economically feasible.

In fact we were compelled to support Boymelgreen's plan to include the landmark parts of the theater into his new building.

I'd say that was very "real" of us considering the alternative of leaving it a vacant eyesore for years to come...awaiting further decay until it was beyond use for any purpose.

Are there any further issues you would like to discuss...suggestions or proposals to put forward?

All I can say is that we've tried our best for nearly a quarter of a century!

What can be said of your efforts?

How can anyone even think about destroying th RKO Keiths? Unbelievable. Generations of memories will be destroyed. Thousands of people will be affected. It's unthinkable. What can we do to stop this from happening?

at the time the Keith's was intact...before Tommy Huang-ed it...there was a formal request
sent to the Landmarks Preservation Commission to restore the original full interior designation which had included all of the Keith's spaces...auditorium, lounges, etc.

This shameful fact remains unto this very day.

"What can we do to stop this from happening"?

Offer the bank foreclosing on the Keith's about 10 million more than Sam Suzuki is willing to pay for it or continue to dream.

Huang should be forced to restore the landmarked portions of the Keith's. Why this wasn't a condition of his plea is beyond me. The city should also have taken possession of the building.

There was actually a request for the LPC to require Huang to post a substantial performance bond before doing any further work in the theater.

I think it originated from Julia Harrison's office.

LPC settled for a token amount which would cover almost nothing
because Mark Silberman, their attorney, was afraid they'd get sued.

Imagine a pansy lawyer who's afraid to litigate!

Huang was basically given a slap on the wrist and told to continue work.

Soon afterward he polluted the building with spilled oil and asbestos.

Tommy has got a guardian angel (Ackerman?) somewhere on high.

Now his son Henry continues being protected from political heaven!

All the roads lead to Congressman Gary!

Put a wish in one hand and a lump of shit in the other and what have you got?

I wish the theater could be restored too...BAH!

The property might be flipped back to Tommy Huang via his son Henry!

Myabe we should all think outside the box. The RKO Keith's space should be preserved and kept as a landmark. However, it would be sacriligious (sp) to make it into an apartment complex or a store (like they did with the Village Gate). Why not consider a venue like BB Kings?

You just wait and see!

The "little duke" has plans!

Yo...
how many of you visitors on "Facebook" have given a dollar so far to buy the Keith's from Suzuki?

Cyber strength appears to be even more anemic than paper power.

Unless that paper happens to be good ol' government green!

A word of advice:

You can only control what you own!

The owner gets to decide on the plans for the RKO!

Make an appointment with Councilman Liu and see if cousin Tommy Huang wants to by it back.

Town Hall (just down the block) had offered its jazz venue and ain't doing so good these days.

I'm not trying to bust balls here. These are the odds you're facing.

This is a satelite Chinatown (by the news media's own definition) where Asians wouldn't even support a Chinese opera company that was located in College Point.

They've since closed down.

How many asses can you fill up a 3,000 seat theater with?

Blockbuster"" video rentals is already history. "Netflix" is next.

It'll be all about downloads soon and taking in your entertainment jollies on your big home screen.

Let's save the RKO Keith's, like we saved St. Saviors. All we have to do is get the residents who live in the vicinity to protest like they did in Maspeth.
Can we do it! YES WE CAN!

Yeah put it in a box!

Most of it'll wind up in a dumpster.