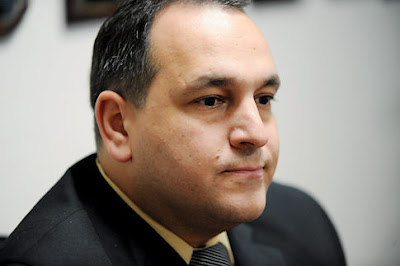 With statewide elections a year away, the Queens Democratic Party will take the unusual step on Thursday of announcing its support for a primary challenger to embattled State Senator Hiram Monserrate, who was convicted of a misdemeanor assault charge two weeks ago.

José R. Peralta, 37, an assemblyman from Jackson Heights who is considered one of the party’s rising stars, said he would announce his decision to run for the seat whether or not Mr. Monserrate, a fellow Democrat, resigned or was expelled. And Mr. Peralta will enjoy the backing of the Queens Democratic Party, whose leader, Representative Joseph Crowley, said he would unveil his endorsement during the party’s pre-election dinner.

It is extremely rare for a party to seek to unseat one of its own incumbents, even those dogged by scandal. Mr. Crowley’s move against Mr. Monserrate — the political equivalent of an excommunication — reflects the growing frustration among many Democratic officials with Mr. Monserrate, who has rebuffed calls that he resign.

“I’ve had enough,” Mr. Crowley said in an interview about his decision. “And it’s not just me. I think the community has had enough. José Peralta has considerable support within this district and is an accomplished member of the Assembly.”

Photo from the Daily News
Posted by Queens Crapper at 12:07 AM

Imagine that, the Spanish community has some bench strength. Good luck to Mr. Peralta. May he be a better man and a better representative than his predecessor.

Peralta the new Monserrate? What does Peralta like to do - kick small animals? We should kick Rep Crowley out of office. Maybe have Liz run for his seat!

Hey Hiram. Are you going to let that pato Crowley - Tom Manton's pendejo - tell you what to do? Some are saying in la comunidad that you're a little mariquita.

Don't be a such push-over punal.

Keep Hiram and Dump Crowley. Let Peralta take Crowley's seat. Crowley, another useless politician who, by the way, doesn't even live here. He resides in Virginia.

We need Albert Baldeo in the Senate. I beliece he lives in the district.

Monserrate is such a hunk! I'd love to bend him over my knee and give him a good spanking on that big fat ass of his.