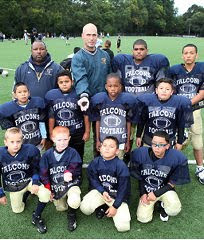 The kids from the Queens Falcons youth football league got sacked for another loss on Tuesday.

Lawyers defending the city against a lawsuit filed by the Maspeth-based league told a Queens judge the kids were never denied a permit to use the grass fields in Juniper Valley Park.

Instead, the city says they never actually applied for the permit.

The Falcons say they did apply for a permit, but were denied because their football cleats chew up the dirt and grass on fields used for baseball in the spring.

Queens Supreme Court Justice Lawrence Cullen has given them until next week to prove the permit application was in order.

Longtime Falcons coach Tim Cavanaugh accused the city of attempting an end run to avoid telling hundreds of mostly minority kids they can't use the baseball outfields that Falcons teams have been using for two decades.

"Maybe we don't fit the profile of what they want for the community," Cavanaugh said.

That's looking like a stronger possibility since the Parks Department's own website says they do not give out permits for practices... In other words, this sounds like B.S. made up to cover someone's ass.

Is the Irish football field going here?
Posted by Queens Crapper at 1:24 AM

Irish football? Fu@! irish football. If it's not American we don't need it. Anyone trying to hinder any football game is anti-American and probably a terrorist.

I wouldn't be suprised if that judge lives on 41st avenue and Parsons boulevard!!!!

Not sure. I thought that it was something like Australian Rules Football.

Here is a link that describes what it is:

It is a different game from American Soccer.

Any progress on tracking down the crazyman who wrecked all the trees?

Maybe Tommy is holding them back.HMMMMMM

From later in the article: "The city booted the Falcons and told them to play their games on nearby artificial turf fields designed for football."

Back in highschool I played football for a couple of years and we tore up our practice fields. That was eastern Connecticut - we could get away with that there. This is New York where green open space is at a premium. I can see why the Parks Dept. wouldn't want fields to be destroyed. It doesn't seem like such a bad thing to ask the team to play football on a football field. The only problem is that, yes, AstroTurf (or whatever brand they have there) is not good to play on. But unfortunatly, it's become almost ubiquitous - even my old highschool eventually installed the turf. That's the state of the game today.

Well, how old is the Juniper Park football field? My understanding is that it's nowhere near 20 years old. Maybe for twenty years the best solution was to have the kids practice on a baseball field. Times have changed. Now perhaps the best solution is to have the kids practice on a football field and not have them tear up the baseball field. If there are other groups, soccer players, etc., who also want to use the field - well, it IS a shared resource and then it's just a matter of scheduling. As long as it's done in some kind of fair manner (say, who got a requist in first - which should be fairly easily auditable) I don't see what the problem is.

The Juniper Park football field has been there for decades.

With Parks, there is no such thing as who puts in for the permit first. They work on a grandfathering system. And a team that's been there for 20 years would get first dibs anywhere else.

"Times have changed" is one of the lamest excuses I've ever read coming from you.