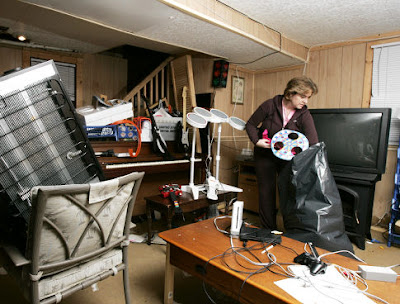 In Hamilton Beach, a little rain makes for some major mayhem.

Rain and high winds caused flooding last weekend on many streets in the southern Queens neighborhood that abuts JFK Airport. But on Davenport Court, flooding is a year-round problem, rain or shine.

Newcomers to Hamilton Beach, which is now officially part of Howard Beach, soon learn that to live on this quiet street they need a good set of wading gear and must consult tide charts. The proximity to Jamaica Bay causes the street to flood as often as 14 days a month during high tide.

Margarita Bravo, 49, a flight attendant for Delta Airlines, has spearheaded efforts to repair a damaged duct pipe that should be draining water from the street into the adjacent canal. The last time the pipe was repaired was 10 years ago, she said.

Now, at the urging of City Councilman Eric Ulrich, the city Department of Environmental Protection has issued a work order to begin repairs this month.

Despite their troubles, many of the residents in this tight-knit community refuse to leave. Gendron believes this to be one of the few remaining places in New York City where everyone knows their neighbor.

That's why the city is dragging its feet in fixing your issue. They'd rather replace you with the tweeded who don't complain and vote the right way. Every middle class neighborhood that was a nice, quiet, safe place to live even during the bust years of the 1970s has been transformed into a quasi-ghetto over the past 8 years via neglect or intentional overdevelopment. The excuse for not installing new sewers has been "the city has no money" even though Manhattan projects have never been turned down and we seem to have hundreds of millions of dollars to steal property at Willets Point. When the worst of the flooding happened we had several billion dollars in budget surplus.

Vote Bloomberg in again for more of the same. He even promised to stay the course. You can't say you don't know what you are getting.
Posted by Queens Crapper at 1:29 AM

Bloomberg was in Hamilton Beach himself last time he ran for Myor and was made fully aware of the problem then. Was it fixed ----nope. Why? ---Elementary, Mr. Watson. Former Councilman Joe Addabbo was not a Bloomberg lackey, current Councilman Ulrich is.

"The city has no money" is an excuse I often hear when I complain about the filth and disrepair of the subway system.

When I was 14, i had a friend that moved to HB. It was flooded. It is flooded now. I think the mayor is a crapload of shit, but this is bs.

Can anyone explain why HB should be bailed out by the city/state/Feds yet again? People with docks in their backyards are concerned with FLOODING??? Sorry folks, we dont pay for Queens to be 'schooner friendly.' Take your skiff to the Riviera.

The articles says they don't fix the pipes there. Just because the area is flood prone doesn't mean they shouldn't get services. Unless you are advocating that they should.