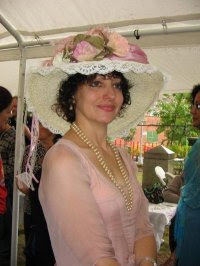 My Memoir of Historian Nancy Cataldi
by Michael Perlman

October 29, 2009 marks the one year passing of Historian Nancy Lucia Cataldi, who was a friend, a community leader, dedicated preservationist, curator, author, and professional photographer. I learned about her passing while checking my e-mail the following morning, and was additionally shocked since no ailments were known, and she was only 55. Despite her relatively young age, her name is attributed with many great achievements.

Nancy Cataldi was the President of the Richmond Hill Historical Society since 1999, and on behalf of neighborhoods residents and borough-wide preservationists, she heroically advocated for the creation of a Richmond Hill Historic District, which first began in 1997 with her role as a founding member. The Richmond Hill Historic District is essential to commemorate, preserve, and revitalize one of the most significant meccas of Victorian homes countrywide. However, the NYC Landmarks Preservation Commission had their own agenda, and repeatedly rejected calendaring the District for a public hearing, without quoting any provisions of the Landmarks Law. She related to all generations by organizing educational programs for children, community events, and parties.

I first befriended Nancy in 2002, while working on a Trylon Theater feature story for my journalism class. I interviewed her, admired her heartfelt responses, and how she dedicated her time to neighborhood causes beyond her immediate vicinity. She submitted my paper into the archives of the Richmond Hill Historical Society, and in Oct 2005, she participated in my rally/press conference to preserve the 1939 World's Fair-inspired Trylon Theater in Forest Hills. In May 2006, we participated a rally to preserve the 1847 St. Saviour's Church and its historic land in Maspeth, and in April 2007, we participated in the Sunnyside Gardens Historic District LPC Hearing, which was successfully designated. We were also board members of the Queens Preservation Council. I recall participating in her March 2006 Richmond Hill rally/press conference, to call for Historic District status. It was well-attended by not only locals, but by borough-wide preservationists. Speakers included Nancy, other organizational leaders, and elected officials. What a close-knit feeling of community!

In 1994, Nancy purchased a 1905 Victorian, which she lovingly restored, and her home received one of the first Queensmark awards. Some of her other profound achievements include writing "Images of America: Richmond Hill," which was co-authored by Historian Carl Ballenas, and one of her two books where history was showcased in a creative manner. In conjunction with the Richmond Hill Historical Society, she achieved Individual Landmark status for the Richmond Hill Republican Club on December 17, 2002. That same year, she achieved State & National Register (of Historic Places) status for the Church of The Resurrection, Richmond Hill's first church, which made it eligible for grants to restore its architectural features. She also created the Richmond Hill Museum. On June 20, 2003, the mostly intact RKO Keith's Richmond Hill Theatre became part of the State Register of Historic Places. She was also the historian of Maple Grove Cemetery, which became part of the National Register, thanks to her diligence. In 2005, she was granted a Grassroots Preservation Award by the Historic Districts Council, where she served on the Board of Directors. Practically a month prior to her passing, she announced on NY1 News that she will be the curator for an Italian American exhibit in Little Italy.

I greatly commend the October 24th ceremony which co-named the intersection of 109th St & 86th Ave in Richmond Hill, "Nancy Cataldi Way." The dedication rekindled the devotion and unity of her prior gatherings, and it was touching how her family was presented a NY City Council Proclamation, complemented by performances of Sacred songs and students of P.S. 66 reciting her poetry. It is important for us to remember and continue to fulfill the legacy of Nancy Cataldi, in order for her legacy be fulfilled by future generations. Now it is imperative that the Landmarks Preservation Commission realize the vision of Nancy Cataldi and her followers, and the authenticity of a Victorian neighborhood that's few and far between, by designating a section of Richmond Hill a Historic District.

We lost one of our city's "greats," and an emptiness fills our hearts, but may her spirit live on. Let's continue to be educated by her teachings, take precedence, and honor a devoted community leader and diverse, remarkable individual. For more information on the life of Nancy Cataldi, and to join the Richmond Hill Historical Society, please visit www.richmondhillhistory.org. 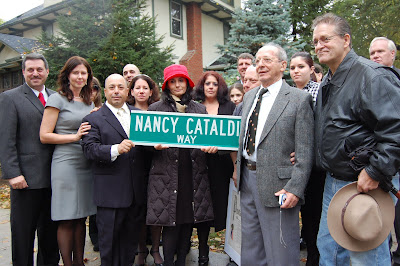 For more on the designation of Nancy Cataldi Way, visit Lost in the Ozone.
Posted by Queens Crapper at 1:49 AM

A wonderful wonderful woman. What the preservation community did to her buy giving her little more than lip service to her efforts to landmarking is inexcusable.

Yet another reason that law should be overturned.

And oh, yes Micheal, please don't discuss Queensmarks. Other boroughs read this blog and they get adult Landmarks.

One of the reasons this boro is not taken seriously.

Thank you for your posting! May my dear friend & Colleague, Nancy Cataldi, RIP. You are right about the Queensmarks and adult landmarks distinction.

Surprised Joe Addabbo showed for the photo shoot. He didn't have to take his wife shopping that day!