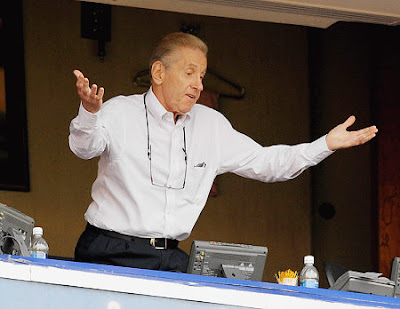 Talk about getting caught in a jam. After watching his team go down to defeat this season, Mets owner Fred Wilpon now faces potential "clawback" suits for raking in nearly $50 million in phony profits from Bernard Madoff's $65 billion Ponzi scheme.

The "Mets Limited Partnership" appears twice on a new list of 31 investors who took home more money from Madoff than they handed over to the mega scammer.

A spokesman for Picard didn't return a request for comment, but a former federal prosecutor told Bloomberg News that the trustee would be in "violation of his fiduciary duty" if he doesn't go after the excess dough.

Photo from the Daily News
Posted by Queens Crapper at 12:43 AM

Like wilpon didn't know what was going on. he was best friends with madoff since childhood. there are numerous pictures of them together at shea stadium. even closing the stadium down so the familys could play baseball together.

Maddoff is scum for his scheme but keep in mind that theres much information out showing that he was just a guy to take all the heat for hundreds of Wall St large firms doing similar practices and he was also covering for many overseas tax sheltered companies as well as U.S. investment corporations not paying a dime in taxes, shady money exchanges etc.

Im still waiting for the other trials for people connected to him but it wont happen to the extent it should.

A lot you may not be aware of the fact that there are Ponzi scheme victims in Queens County that were not fooled by Bernie Madoff. I am refering to the people who invested in a retirement scheme by Queens native Louis J. Pearlman. I personally know several people who lost amounts of over 7 figures! However, most people lost their life savings and are also being harassed by the trustee of the forced bankruptcy with clawback suits. Most of these people are elderly and have no way of paying back money that they did not know was part of a scam.

Lou Pearlman and I grew up in Flushing and we both had a passion for blimps. We visited the Goodyear blimps at Flushing Airport often and it was Lou who suggested that we start our own blimp company. Working with a German manufacturer, I created marketing materials for a blimp that was very similar to Goodyear's, including a four-color nightsign. However, Lou leased a blimp to Jordache but substituted a smaller, inferior blimp. We assumed that Pearlman told Jordache that they were not getting the German-built airship but you know what happens when you assume.

The blimp crashed on its first flight, as many had expected. It was an insurance job that netted Pearlman $2.5 million! We didn't speak for over a year as I was angry over his deception. For some reason I agreed to help bring the German blimp into the United States in 1985. I traveled all over the U.S. on the ground crew as the administrator for several years but left after feeling that Mr. Pearlman was once again up to no good. My instincts were on the money and that blimp also met with an untimely demise in Texas but no one thought to investigate the blimp's loss and Pearlman once again had insurance money in his pocket.

Although no longer employed by his company, I monitored his operations and made several reports to the FAA and NTSB about suspicious incidents. Eventually Pearlman sold off the blimp company because he had another career goal...music! He created the Backstreet Boys, *NSYNC, and a Ponzi scheme that eventually netted him $500 million. You see, everyone perceived Pearlman to be a mega rich mogul and wanted to be a part of it so they threw money at him because he assured everyone that his EISA plan was sanctioned by government agencies and international insurance companies.

I never trusted Pearlman and so in the mid-90's, I checked to see what my airship stock was worth and was told that I was no longer a shareholder! After an investigation, I learned that one of Pearlman's employees signed my name and took away my stock without my knowledge or permission. As you can imagine, I was livid and contacted appropriate government agencies but they did think that there was enough cause to commence an investigation. As Tyler Gray wrote in his Pearlman tome "The Hit Charade", The SEC acknowledged his (Gross') complaint with a form letter but nothing came of an investigation, one that likely would have unearthed a massive fraud either with EISA or Trans Con itself."

I also tried to alert Pearlman's family through his cousin Art Garfunkel but the problem that I had was that Pearlman was telling people that I was a disgruntled ex-employee who was jealous of his success. Pearlman, who had issues with honesty throughout his life, was able to convince everyone that there was nothing wrong as he continued to rake in his ill-gotten gains. When the ruse fell apart a few years ago, Lou fled the country but was eventually taken into custody in Indonesia. He left behind millions of dollars of debt and the destroyed lives of thousands of investors. Lou took $500 million which is 1% of the Bernie Madoff take!

I have kept in touch with many of Pearlman's victims and they are devastated. However, many of these people are being further victimized by these clawback lawsuits because they did receive some return on their money. The fact that their losses are tragic and that they have no money to show for their investment or pay back the trustee is taking its toll and these people, mostly in NYC and Florida. Where does Wilpon come off making a profit on the Madoff scheme and expecting to slide under the radar? The one lesson that I learned from my personal experience with Pearlman is that there are two sets of rules in our society. If you are a Wilpon or a Bloomberg, you can pretty much write your own rules (laws) and steal money and no one blinks an eye.

While I feel that the clawback lawsuits are an unsettling nuisance to people who have already been punished for placing their hard earned money into what seemed to be a legitimate investment plan, people like Wilpon know how to play the system to their advantage and profit from the game. I hope that the trustee in the Madoff case retrieves Wilpon's ill gotten gains. More importantly, I am hoping that people wake up to what is happening here in the United States and understand that greedy people like Pearlman and Madoff are undermining the trust of our financial system and causing everyone to see their savings dwindle, even if they did not directly invest in any scheme. Our government has got to stop giving our money away to people who do not deserve it!

PS Lou Pearlman is now serving a 20+ year sentence in a Florida medium security federal facility but someone here in Queens is attempting to start a movement to free Pearlman so he can earn enough money to pay back his victims. The judge told Pearlman that for every million dollars returned, he can have a month off his sentence. Why don't they let Bernie Madoff off as well while they're at it?

Hope the courts cut you up good!

is there a coincidental connection between wilpon,ackerman,madoff and jonathon pollard (the American spy for Israel ) ?
did not ackerman hold a wedding ceremony at home plate at shea,(now citifield) stadium?

did not ackerman lobby to get clinton to pardon pollard?

is not pollard and madoff residing in the same federal prison ?
birds of a feather ?

Madoff's close friend Jeffry Picower was just fond drowned in a pool who was also suffering from Parkinsons. He was accused of making 7 billion from Madoffs fraudulent investments and in the know. Im sure there will be more to come like Picower who will go the way of Ken Lay.