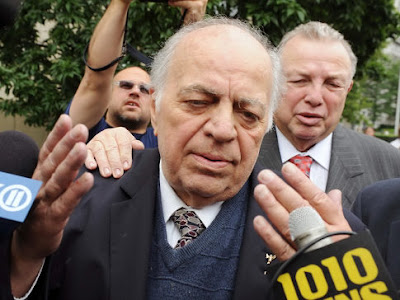 Seminerio told McLaughlin about how he had secretly become his own lobbyist, getting thousands of dollars in fees from hospitals to push Albany bureaucrats for favors. Fortunately for history, McLaughlin was recording the discussions in an effort to gain leniency for his own crimes (he got ten years anyway).

"We don't have no contracts we have handshakes," Seminerio says as they sip coffee on September 28 at the Atlantic Diner in Richmond Hill.

McLaughlin salutes his companion's initiative: "Take your wallets there," he says.

"Take your wallets there!" responds Seminerio.

The duo commiserated again on November 15.

Seminerio: Think of what I'm saying to you. What the fuck does it mean that we're elected officials? It doesn't mean shit.

AS: Who was that guy you replaced?

AS: Who was the guy that you replaced?

BM: I guess Doug Prescott was in there in the beginning.

AS: But who the fuck even remembers?

AS: Who remembers anyone? Tell me one good thing he did for anybody. And he must have did a lot of good things.

Photo from the Daily News
Posted by Queens Crapper at 1:29 AM

All members of the Queens Co Machine.

Lets start calling them the 'Monopoly.'