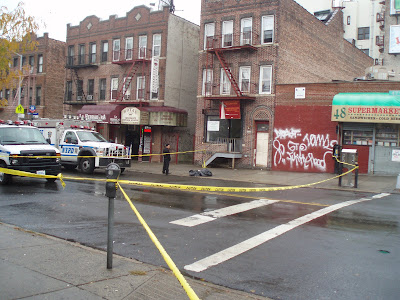 Two men were shot, one fatally, on 48th street this morning, police said.

The shooting happening outside of 45-55 48th Street at 9:00am and the perpetrator(s) ran off on foot, Lt. Concepcion told the Sunnyside Post.
Posted by Queens Crapper at 1:28 PM

Courtesy of the mayors open arms refuge city policy.
It’s become just like the streets of Mexico and Central America.
Its only going to get worse as the cockroaches living in the cracks grow desperate and cold come winter.

How do you know what ethnic back round they are you raciest ass.

get your stories straight you bunch of racist jerks! and sunnyside is not as bad as the streets of mexico and central america. And furthermore it is full of more Tibetans than it is Hispanics. Shit happens anywhere and everywhere, and a neighborhood full of hard working people should not be stereotyped by 4 rotten apples or a group of idiots that can be found anywhere.

All the descriptions are coulored and Eurotrash---some Russian.
There are are no more white american born Archie Bunkers in Sunnyside South.
The Irish even split

There's no reason to get into all this race nonsense. Obviously, the south side of Queens Blvd. (and it is only above 46th street) has pockets of poverty. It's always the fools that trot out with this racist crap.
Their just trying to seek a better life-- just like I would if I were raised in a nation with no prospects. Let it go.

so leave a comment if you actually know what you're talking about. that area is well-known for drugs (buying, dealing) for at least the last 27 years or so. nothing like that has happened in recent memory. in the early 80s someone was shot as well, during the hey-day of the dealings there. after that it went more underground. so it must mean that the police have not been keeping tabs on those people. keep patrolling and policing and pressure those types of people out (keep them in jail and away from the streets). most of the people there are hard-working and law abiding. except for those that stick around making it a mess for everyone else. also remember it's near an elementary school. so it's in everyone's best interest to keep the area drug-free and safe for the kids.

get your stories straight you bunch of racist jerks! and sunnyside is not as bad as the streets of mexico and central america. And furthermore it is full of more Tibetans than it is Hispanics.
---
oh?

PS I live in Sunnyside.

The gangbangers of 50th Street north vs 50th Street south had a rumble. "When you're a Jet,
You're a Jet all the way
From your first cigarette
To your last dyin' day."

Where exactly is "Sunnyside South"?

This incident actually occurred in Woodside -- at least according to maps, Zip Code and people I know who live in the buildings there (the area below Roosevelt Ave./Greenpoint Ave. is the southern part of Woodside).

Drug dealing illegal aliens. they ran decent people out of Jackson Heights, then the condo/co-op rush.

same crap in Woodside. too many illegal aliens who have nothing better to do than rip off the government and the rest of us.
go back to Mexico & take La Raza with you. go back to Kosovo and take your Mercedes Benz with you.

at least the Tibetans have some decency and civic interest.

Those little apartment buildings are known drug spots. I used to get some good weed out there.

this area is a woodside zip but part of sunnyside. south of QB from 46th up to 50th is pretty crappy, nothing like the rest of the neighborhood (including some very nice areas south of QB in the 30's and low 40's.

Anyway I saw EMTs pumping this guy's chest the the scene at about 8:30 a.m. LOTS of police cars in the area the rest of the day - especially compared with the ZERO police presence during normal days.

YA ALL TALKIN CACA.. IF YA DONT LIVE THERE THEN DONT TALK... EVERY NEIGHBORHOOD HAS THEIR ISSUES.. GET OVER IT!! THINGS LIKE THIS HAPPENS EVERYWHERE.. YA COMPLAINING ABOUT HOW HORRIBLE IT IS.. THEN DO SOMETHING ABOUT IT.

RIP EDISON AKA DUNNY...
SAD U HAD TO GO THIS WAY

I looked at my paper copy of the New York Post (Sunday 10/25) and didn't see this item. Then the Daily News, and the Times -- no there either. I didn't see it on local TV news or their Web sites, or even NY1 which appears to cover every discharge of a gun in the city. hmmm...

none of these kids were illegal aliens all three were american so stfu you racist ignorant assholes. rip our youth . stop pointing fingers and do something about the problem . RIP edison see you in heaven

Ya dont even know where the victims were from so why would you assume they were Mexicans. They actually weren"t you ignorant fucks they were legally in the country. Get ur info correctly and then talk shit. If ya got a problem then do something about it ya bitch ass niggas.

R.I.P Dunnie
May your soul Rest in Peace...
Just remember what goes around comes around...

Everyone should shut up with all the racist bullsht here and all the arguing. a person close to many people lost his life. somes death isnt the time to be discussing this nosense...

Just by the comments left by some of their "homies" you can tell these 2 were not angels.

Newsday has the story. The dead drug dealer was Edison Vera.

what the hell does race have to do with this death? get ya shit str8 if not then shut up dun be runnin ya mouth when ya dunno nothing ya got a problem then come see us

Ebonics is prohibited on this blog.

I am so heartbroken to read of Edison's death. I was his 2nd grade teacher when he attended P.S. 199 in Sunnyside. He was in a class for gifted children. Unfortunately, he was subjected to the marital problems of his parents and, at the age of seven, torn apart by their struggle. I witnessed his decline and, sadly, there was nothing I could do to save him. Those of you who know nothing of a person's life should keep your mouths shut.

A lot of us had shitty home lives and bad parents. It didn't make us gangbangers.

Only the strong survive.

you all need to get your stories straight this is not about race or gender or the kids its all about petty shit fighting over whos teritory is whos when in reality its no ones its woodside a neighborhood like any other where you are going to see the good and the bad the poor and the middle class this isnt about no damn russians or irish its about people who have nothing better to do than to want to prove themselfs, to make a point. the only one you prove yourself to is god. that nothing like this has happened since the 80's please you need to come out more often you obviously dont know what really goes on in woodside huh and fyi things like this happen every day everywhere to all kinds of people drugdealers,elderly, kids, parents, brothers and sisters if you ask me the crime rate and drug dealing transactions have gone done alot in the recent years but it still exists. all you can do is mind your own business and stay away from those who are full of greed and envy because that is what will end up killing us all!!!!!!!!!!!!

IF YOU DONT LIVE IN WOODSIDE DONT TALK SHIT AND WHERE DO YOU GET FROM THAT THEY WERE ILLEGAL OR IMMIGRANTS OR ANY OF THE EXTRA SHIT WE ARE ALL IMMIGRANTS IN THIS COUNTRY WHITES, BLACKS, HISPANICS, ALL OF US SO STFU R.I.P EDISON- MAY YOU NOW REST IN PEACE IN A BETTER PLACE THE GOOD DIE YOUNG

I'm pretty shocked at the close-minded individuals leaving comments on here without knowing what they are saying. The young men involved in this were human beings, not parts of a toilet. Those who were actually raised in Woodside know that what you are saying is indeed garbage. (By the way this was Woodside, not Sunnyside) As a civic activist, it is disgusting to hear that people are so ignorant, leaving comments such as "cockroaches living in cracks" and comparing this town to other country streets. It has nothing to do with ethnicity as this happens in every community. As a matter of fact, this neighborhood has a low crime rate. Do some research. If this happened to someone you knew, knowing that he was not a cockroach in the street, or a drug lord as you ignorant people are implying, and knew that this town of Woodside actually has an unbelievably healthy and low crime rate, you would not like seeing such stupidity either. I don't live on the block of the buildings you refer to but I know many of the people who do, including the one who was murdered. They have (and had) jobs. Some people may be less fortunate than you. It doesn't make them bad people, and it definitely does not make anyone deserve to die. People's lives were taken here. Young people. With a future ahead. And ignorant people like you are making others like me a bit concerned. You seem to be quick to judge and slow to learn. You don't give people a chance to better themselves or help those in need. You think you are better than everyone else. I would rather live on the "south side" of Queens Boulevard than anywhere near such close-minded, racist people who like to talk garbage without knowing what they are saying. I feel bad for you knowing that you probably haven't a clue about life.
Rest in Peace, Edison. You were a good guy.

This article needs to have it's information fixed. The article is not accurate at all. Oh, and it was in the MORNING, not the evening.

live in the neighborhood, knew Edison we played ball together... He was a good dude, everybody gets into some shit they shouldnt have at one point another, or wrong place at the wrong time... He will be missed... R.I.P my brother