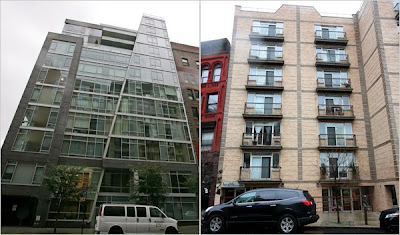 Roofs and windows that leak whenever it rains.

Heating and air-conditioning units that can’t quite heat or cool the entire building.

These kinds of complaints have become more and more common in recent months, according to lawyers and engineers who represent owners of sleek new condominium units across the city.

They say the wave of development in New York City that started in 2004 and crested in mid-2007 has resulted in a wave of accusations about defective construction and building design.

Lawyers at several firms said that the volume of condo defect work had doubled in the last year, adding up to dozens of buildings with construction problems. In most cases, the condo owners hire lawyers to add muscle to their complaints, in the hope of getting the necessary work done. In a few instances they have filed suits. Lawyers say that condo owners are reluctant to talk about the defects in their buildings, fearful that publicity will decrease the value of their properties.

Water leaks and climate control problems top the list of complaints. Many of the recently built glass towers are especially prone to temperature issues, because air-conditioning units are too small to combat the punishing summer sun, and heating systems can’t make up for a lack of insulation during the cold months.

But lawyers and engineers said that they had also come across buildings with more serious defects that violate the city’s building code. The most common code violation involves inadequate fire-stopping components — building materials that are used to fill empty spaces where fire or smoke can spread between floors and apartments.

Howard L. Zimmerman, an architect whose firm is checking about 35 new condo buildings for construction problems, said that his workers had found fire-stopping violations in about a third. He said his firm has clients in buildings of five to 300 units, throughout Manhattan and in Brooklyn and Queens.

We warned you time and again that the "luxury" condos being built are crap. We were accused of jealousy. Yes, we are jealous of you folks who live in overpriced firetrap shitboxes.

Have fun in court.
Posted by Queens Crapper at 1:52 AM

Ah the hell with it, Crappy. We told them so, and they just wouldn't listen!

As a doorman at one of these lovely shiny new condos on the Upper West Side, I have the privilege of seeing some of this stuff first hand. Wood floors warping and curling up. New fridges flooding the whole kitchen. Ceilings swelling then finally bursting open to reveal a leaking pipe. Amazing shit.

Some new residents ask if I like their, oh, say between 1 and 4 million dollar apartment. I immediately say, "Nope. Just wait a couple of months and you'll see why." Needless to say, the turnover is just as amazing.

A dumb-ass well off yuppie and his money are soon parted!

While the builders of this glitzy crap are off relaxing in their swimming pools in sunny Palm Beach!

"You can pass me that Margarita now doll".

Oh, you are all just jealous.

That what the real estate brokers (in mean tenants) say at Hunters Point.

You are obviously jealous. Otherwise you would not have brought it up.

Illegal laborers whose background is adobe brick making, precious architects that want to make a statement (and never read about Frank Lloyd Wright's failure to understand a box is the standard house form for a very good reason), quick buck real estate scum that suck our taxes out of our communities and build houses to sell rather than live in, make for a rich stew.

These buildings will soon be worn out and shoddy, and will be filled with third world types forced to live in fire traps.

This new century will have some nasty fires.

That's what happens when greedy developers try to cut costs and hire illegals. You get what you paid for: cheap third-world quality buildings.

I forgot to mention the City (read: Mayor) has given up millions in revenue by providing many of these developers with ridiculous tax abatements. So you have new condo buyers dropping well over $5 million in some cases for apartments and having their property taxes drastically reduced the first 10 years of residency. And what do most owners plan to do after that decade? You'll see a rash of high-end condos flooding the market. So these lemmings have bought into a giant scam of over-priced low-quality products that they'll offload onto poor schmucks in ten years. The poor schmucks then foot property taxes based on over-valuation of shitty apartments. I'd laugh if it wasn't so pathetic.

an aside to Joe, I thought you were a gentleman farmer, ridgewood landlord and working bassist/recording studio engineer enjoying royalties from your successfull band.
now you're a doorman!?!?

These buildings just look like overgrown fedderbox specials. I love how they slap luxury on a place that has those groovy side slide windows and already rusty balconies. real Class.
If I were to buy into one of these joints, It'd have to be a converted loft, atleast you know you're getting good bones from an old industrial structure.
buyer beware

There's Joe and then there's -Joe. Don't get them confused.

Nothing new here. In 1970 two of my friends lived in a 1968 high rise pretentiously named "Adam's Tower" 32 storys..parking..rooftop pool and movie theater.

It also featured electrical outlets that had been inadequately anchored to studs and now were all hanging by the BX an inch from the walls. The interior room doors were so cheap that you could punch through them with -two fingers-.

Many of the windows were stuck and filthy because they couldn't be washed.

These places do have several things most private houses don't have: