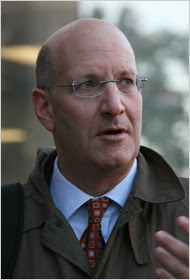 The new chairman of New York’s transit system is looking to introduce a pricing policy that would offer passengers discounts to ride late at night and on weekends, an abrupt break from a century-old fare model that could be the city’s biggest transportation revolution since the demise of the token.

A new computerized, scannable fare card would allow New York City Transit to charge passengers different prices depending on the time of day, a practice already in place in London, where Jay H. Walder, the chairman of the Metropolitan Transportation Authority, first worked with the concept.

“We might imagine that we offer discounts at later times, or we offer weekend discounts,” Mr. Walder said in an interview on Wednesday. “Time-of-day pricing might be very attractive.”

The goal would be to encourage use of buses and subways during traditionally quieter hours. And it would bring New York’s subway system in line with local commuter rails, which charge a range of fares.
Posted by Queens Crapper at 1:38 AM

----Duh.
And how does he expect to time regulate (sync)all these tickets with ancent turnstyles without creating a major traffic jam.
Buying a ticket on the subway is already a mess, its a 5 to 10 minute line at Penn Station.
1/2 the machines are so warn out, bad sensors badly maintained they cant read dollar bills.

Oh yeah and my boss is going to change my hours just so I can get
.25 cents off a train ticket.
The MTA chief should go back to pallookaville, or rub those 2 brain cells together, maybe he can spark an idea that works.

The turnstile system itself is going to be changed.

In any case, they've been doing time of day pricing system in other cities for decades. It will work.

This city isnt even the city that doesn sleep anymore. Putting off-peak subway fares will just further prove my statement.

As hideous as the service is late nights and on weekends (when it's virtually impossible to get from point A to point B without a problem or lengthy delay) they ought to not offer a discount, but allow us to ride free.

You're all missing the point. A new system to give a discount on off-hours? Well, that same system will be used to charge MORE during rush hour.

We have no control over when we have to go to work, so we will take it right on the chin once again.

Oh, and off-hour discount? How much? A quarter? Even a buck? Oh, boy! Let's ride the subway at 2am - we get a whole dollar off! Yippie! Let's give Bloomie the next four years, too!

Like saving a dollar is a game changer. You'll decide, gee, it doesn't pay to drive in. Or, I'll stay out of that taxi and save a dollar.

They are treating us like the morons we mostly are.

Recession? Deficits? Not when there's votes to be had! There's at least 40,000 residents in the town who can start riding on the dole. Now, THAT's how you buy votes.

Now, that's NY stupidity at its finest. Long Island needs more frequent and reliable public transit BADLY RIGHT NOW! The current bus system is running over capacity. If you miss a bus, you have to take a cab or else you're stranded. But noo, the sheeple would rather die than ride the filthy bus. So why not save old people the hassle and give them free rides. Bend over sheeple, granny needs a free ride to the mall or else she might get on her 80's Buick and kill some kids...

Anyone who move to Long Island knows they need a car. The only people on buses in LI are college students and domestics.