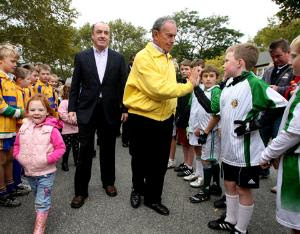 New York City Mayor Michael Bloomberg told a large gathering of footballers from the Shannon Gaels club and their families in Queens on Saturday, October 17, that it is “time Queens had an Irish football field.”

Bloomberg, who attended the first annual Shannon Gaels field day at Sunnyside Gardens, said, “We are in very early stages of the process but we are cautiously optimistic that we can get it (a GAA pitch) done.”

Bloomberg said that the Queens Parks Department sat down with members of the Irish community to discuss options last week.

“The Irish have helped make this the greatest city in the world and I want to see more Irish come here … and more immigrants from around the world.”

Although no specific site has been decided upon, Staunton said the commissioner of the Queens Parks Department welcomed the proposal pitched to them last week with open arms.

Staunton and members of the Shannon Gaels hope to secure a six-acre site on city property.

If you're an American black or Hispanic kid that wants to play football, the Parks Department kicks you off your home field. If you want to create park land in your neighborhood so kids have a place to play, Parks tells you to take a hike. If you're fresh off the boat and want to play your version of football during an election year, the Parks Department and Mayor dedicate city property to accommodate you.

Tweeding at its most blatant.
Posted by Queens Crapper at 1:04 AM

Get out and vote

Maspeth Mom says.
Thats a hoot... The Queens Falcons have been booted from Juniper Park - but Bloomburg is going to build a field just for Irish Football? He can use all the unemployed to build it. Then all the unemployed can play Irish football on it. How great will that be???

I think that this park is probably a low priority when they are closing hospitals, but the last boat sailed on "fresh off the boat" Irish a while ago. Irish illegal immigrants have already left for greener shores in Erin.

These "fresh off the boat" Irish are probably the great-grandchildren of the ones who arrived at the turn of the last century or 50 years before that.

I am bewildered to see Bloomberg pandering to the Irish vote, especially since there barely seems to be any Irish left in Queens.

A year or so the Times wrote about the Irish football clubs that gather each weekend in the Bronx.

The clubs are dying because of lack of attendence, compitition with American football and moving out to the suburbs.

Bloomberg can kiss my ass but I'll never vote for him!

hate to tell ya, but they are illegal immigrants. why is Doomberg pandering to them?

The illegal Irish in Sunnyside are not your average person. They do not care about local politics, are not civic minded & look down on all the stupid American natives. The illegal Irish care only about money and taking your job from you! They feel they are superior to Irish Americans.

There are Irish owned business's in Woodside & Sunnyside. They will not hire American workers, only other illegal aliens, such as Mexicans.

The Irish slumlords love to hire Albanians and people from war torn Kosovo, any one who doesn't know their rights is a good bet they will hire. An added bonus is as the slumlord harasses and does no repairs for tenants, the illegal alien will stand by catching flies w/their mouth open.
Doomberg- while you are in the neighborhood, close the Emerald Isle Immigration Center. They are aiding and abetting illegal immigration!

They do nothing for the community, they are helping to destroy it.

bloomberg is a piece of shit! i had emailed the mayor's office in regards to the qns falcons and they waited till they filed a suit against the parks dept to respond, oh i'm sorry nothing we can do now since there is a suit! i guess bloomberg only cares about the irish vote (white) now, and to hell for the diversity team of the queens falcons. i guess he only cares about the rich and white folks. i'm white and voting for thompson.

"But their children born here are American citizens!"

They have a BIG lobbyist that's a friend of Bloomberg's.

all i know is he only cares if it benefits himself or his status on his dumb ass election. he could of stepped up and said no to the h.s in maspeth and went with an alternative site. he could of did more with the park, and with waste management he could of worked with our concerns. all i can read into his maddness is the mighty dollar and he has "SPECIAL INTEREST" INVESTMENTS WITH THEM. we all know his staff reads queens crapper prove my ass wrong! let's see what maspeth means to him..... and we have a lot of good irish folks here! who love living and being a part of maspeth.

Let's see, so far we have "Bloomie panders to Chinese, Irish, Hispanics.." OK we have an urban politican in a multi-ethnic city pandering to various groups. And this is shocking "news" because....?

amazing. i live in sunnyside. there aren't that many irish here anymore.

JUST SHOWS WHY WE NEED ALL THESE PEOPLE TO WORK WHILE YOU ALL SPEND YOUR TIME PLAYING COMPUTER GAMES AND BLOGGING!!

I never wish anyone so much pain and misfortune as I do wish upon Bloomberg. What a fucking douche. I hope he chokes on a pretzel while a geese takes him down. Fucking closeted homo.

Granted, Queens and the Bronx were flooded with illegal Irish during the 80's and early 90's, but you would be hard pressed to find a large group of them anymore. Some actually got citizenship, but many went back to Ireland when their economy picked up in the mid-late 90's. Maybe they'll be back if our economy picks up and theirs continues to tank, but the fact is that there aren't many here now.

I heard about this but didn't go to the event. I wish I had. I would have liked to ask about our power supply and preparedness for future demand. And so on.

Again, not to favor adults over children. But for a "pandered to group," the Irish aren't doing so hot.

Those discriminated against minorities have access to scores of basketball courts and baseball fields while this would be the second Gaelic football field in the entire city.

Again, we don't need it and I'm not advocating building it, but I am amazed at the jealousy. This is a lot like a millionaire envying someone's food stamps.

No, it's not. No one is saying they shouldn't have it, the question is why everyone else is being told to go to hell while they are in talks to get 6 acres of city land for their exclusive use.

It was never stated that they would have exclusivity- only a place to train and play scheduled games.

While the Queens Falcons are being denied their place to train and play games?

there are alot of irish who are legal and who make a full contribution to this city and nation. Also there is many kids from different cultures and races
who play our games and we welcome them with open arms.

We all know (or should know) that this ain't happenin'. Just one more of the Kommissar's empty promises at election time.

Queens Crapper: While the Queens Falcons are being denied their place to train and play games?

From the Daily News article you posted on the topic: "The city booted the Falcons and told them to play their games on nearby artificial turf fields designed for football."

Not sure about the training - which, let's be fair, DOES tear up grass fields - but there doesn't seem to be a problem with where they can play their actual games. *GASP* On a football field. And AstroTurfed one, yes, but a real live field.

So what's wrong with building a field for Irish Football? I've never seen the game myself; it might be exciting.