Mobsters made profit off taxpayers 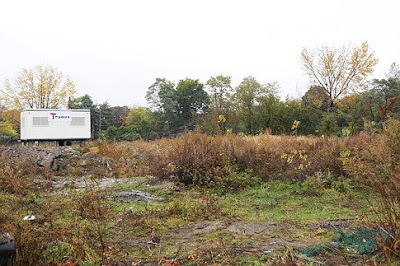 The Bloomberg administration agreed in July to pay a real estate firm almost $46 million for 10 acres of vacant land in the East Bronx - where the city wants to build its long-delayed backup center for 911 operators.

The firm, Hutch Realty Partners LLC, is partly owned by two men, Michael Contillo and Joseph Deglomini, who were indicted in the 1990s for racketeering in a scheme with a reputed mobster, the Daily News has learned.

Hutch Realty quietly bought a key portion of the 10-acre Bronx site in January 2005 for $2 million from the state Urban Development Corp.

That was around the time the NYPD began eying the site as a location for its huge new backup 911 center - known as PSAC 2.

The rest of the proposed PSAC 2 site is on an adjacent 18-acre site that Hutch Realty bought from the state in 2001 for $3.5 million.

Why didn't they just use eminent domain?
Posted by Queens Crapper at 1:49 AM

They didn't use eminent domain because they would have been buried under the lot instead of walking on it.

While they're at it, if they haven't stopped payment yet, I would keep a weather eye out for human remains and toxic waste illegally desposed of, two mob specialties.

Empty lots of good size in the middle of the city are very difficult to find, something unpleasant was here.

Why didn't they just use eminent domain?

"Why didn't they just use eminent domain?"

The answer is so simple: The Commissar loathes hard wording and honest citizens like all those employees and small business owners at Willets Point.

But, he gets a tingle up his leg when wealthy, connected gangsters want more taxpayer money.

So, he joyfully screws the middle class, and then relieves his conscience(?) by screwing them even more by transferring their property and tax dollars to the wealthy.

And, it's more effortless. The Commissar needs to worry about kickbacks from fewer cronies.

And the, don't forget, this colossus of management, this titan of commerce, has screwed us even more by utterly mismanaging this project by larding it up with his incompetent contractor cronies.

But, who cares. When some merchant uses 911 to report and ongoing crime, or a citizen phones 911 to report terror activity, and the system fails, and people die, the victims will NOT be the Commissar. He will be safe. His taxpaid bodyguards will die to protect him. And, he'll shriek like a girlie boy and fly away to Bermuda.

because they didn't want to be thrown into the east river??

Because we pay Mayor Mike just $1 a year, so it's the best deal in town. So says one of those bus-shelter ads touting his stellar record of achievements. Ha! What a crock! We'd be better off paying anybody else the full salary, rather than continue under the thumb of the Kommissar. I'm with you, Taxpayer.

Will the mafia ever die?

nope, the mafia will live on forever! when one ends another one starts up.. mafia is not only italians......