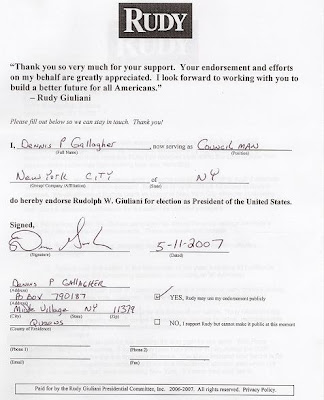 Mr. Giuliani is tanking badly, perhaps because Dennis Gallagher has endorsed him. Actually, when Gallagher's lawyer compared him to Giuliani (Talk about hero to zero!), the slide began shortly thereafter.

His colleagues think the DA should stop picking on Pinky:

Two Republican council members, James S. Oddo, the minority leader, and Vincent Ignizio, issued a joint statement: “Dennis Gallagher has already begun to make the necessary changes in his life, and the judge’s decision this morning affords him the chance to reclaim his life.” They added that while Mr. Gallagher admitted to “morally challenged behavior, from Day 1 he has steadfastly maintained his innocence.”

Let's get this straight. The DA should drop their cases against people charged with crimes who steadfastly maintain their innocence. Let's take it a step further and say the police should not arrest anyone who says they didn't do it. Because we know that guilty people always own up to what they've done. This is the kind of reasoning that gets you disinvited from Rudy's parties.
Posted by Queens Crapper at 7:47 AM

I guess that's another politically correct way of saying he's a sexual predator. Or better yet, he's a lying conniving self-serving pink piece of crap who only sees women as objects to get his rocks off.

Oh damn it Rudy is going down too? How come every time I attach my lips to the derriere of an elected official they wind up on the scrap heap? How the hell am I going to be considered a major player in Queens if my phony pandering amounts to nothing? Does anybody know if Liz Crowley is looking for volunteers?

Well.....at least Pinky won't be getting
a presidential cabinet appointment!

Now back to Rudy:

When he first ran against David Dinkins
for mayor of NYC.....
I spotted a small printed unsigned political poster
tucked behind a supermarket stand at
150th Street in Whitestone.

I wanted to snap a photo of it
and forward this printed piece of bigotry
to the newspapers.....
but the owner of the market looked
like he might be a "made man"
and I didn't want to wind up
as a fillet of Flounder!

We never knew if Rudy's pol/gang promoters
were behind this. and some other
racist clandestine postings in this heavily Italian neighborhood.

There was a line in one of the dailies,
"Good bye Rudy Tuesday"!

He's already gone and I'm smackin' my lips
waiting for Pinky to go (to jail of course) !

Stick a fork in both Rudy & Dennis Gallagher, they're both done.