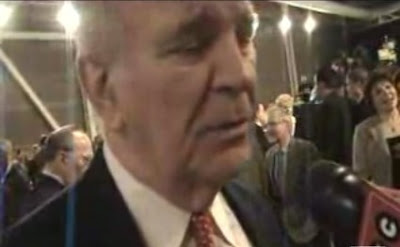 Here's Republican State Senator Serph Maltese of Queens, who barely won re-election two years ago, talking about how happy he would be to have Michael Bloomberg face off against Eliot Spitzer in the 2010 governor's race.

Maltese on Bloomberg 2010 and John McCain in N.Y.

Newsflash, Serph: Bloomberg left the Republican Party and became an independent last year.
Posted by Queens Crapper at 12:21 AM

Maltese is Independent too.

He is independent of all thought or information.

Anybody going to run against him this year?

An Independent is better than a Dem as our Gov. Unless of course you like our Gov. wasting tax dollars on Trooper Gate or trying to find out a way to get illegals to legally operate cars. Spitzer has a fat bank account, do you really think he cares about the average person, ha!

I could be wrong, but I think I got a mailer from Maltese that said Spitzer tried to cut school funding by $300 million, or something around that number. Maltese voted against the cut. A GOPer that cares about education? I thought that Dems were the only ones that cared about the people.

Spitzer has a fat bank account, do you really think he cares about the average person, ha!

You can easily replace "Spitzer" with "Bloomberg" in that sentence. Spitzer wanted to give driver licenses to illegals but if Bloomberg had his way he'd buy them all cars...

Are there no actual Republicans that can run and win against Gov. Steamroller? Hey, Serph, whaddya think?

I am a Democrat and I am glad I voted for Maltese in the last election. Look at who he was running against.

Serf must be surfing the bars and gin mills.

republicans are for the rich,

democrats are for the poor,

Serf isnt out of it. The guys is around 75 and he still has a 100% record in Albany. He might be the only senator or assembley person to have that kind of record for that period of time. Plus he is driving up there from MV. Addabbo doesnt leave his district and Baldeo has never been out of Ozone. We need Serf again.

Why are the media knuckleheads interviewing Maltese and not Ragusa? Who's in charge of the Queens County Republican Party, hmmmm?

Yeah "Ralph".....
he may be just warming the bench up there.

Somebody heard him snoring
during a legislative session recently.....
despite the toothpicks he uses
to prop up his eyelids
so he can appear awake and on top of things!

As for me....
I learned long ago to sleep with my eyes open
without the aid of prosthetic devices.

Nevertheless....
I gotta hand it to "The Don".
It's "A" for effort out of respect for his old age!

Big deal......
so he drives himself all the way up to Albany.....
while he's driving his constituency
into the ground !

How about some examples.

The sorry state of his constituency
IS THE EVIDENCE .

The voters are savvy....
but you need to take a fresh look around.

And by all means....
continue wearing your rose colored glasses....
although they've attained a darker hue by now
(meaning....your head is up your ass) !