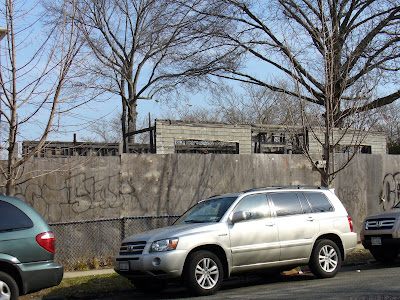 The northwest corner of Francis Lewis Boulevard and 42nd Avenue in Auburndale is the proposed site for a day care center that could service over 250 children ages two to six years. The applicant claims that 175 children will actually use this community facility. The building will be two stories high and two stories below ground with a roof top play area.

The Auburndale Improvement Association, Inc., which is a civic group that represents this area, opposes the construction of this facility in its current presentation. The applicant has applied to the Board of Standards and Appeals to build in the bed of a mapped street since part of his property lies within the boundaries of Francis Lewis Boulevard on city maps. We feel that it is a bad idea to allow any construction in a bed of a mapped street because it shows a lack of foresight for the future needs of all residents in the community. Francis Lewis Boulevard may need to be widened some time in the future since the road narrows at this location. It should be noted that Community Board 11 has rejected the application unanimously.

There are other issues regarding the facility that causes us to oppose this project as well. There is the issue of where and how children will be dropped off and picked up at this proposed day care center. Most of the children will have to be brought in from other areas by car or private bus. This location is very busy with P.S. 130 across the street. Parking is very difficult. Small children being dropped off have to be unbuckled from a car seat and escorted by an adult to the building. The process would be reversed when it is time to go home. We are talking about scores of children and lots of traffic. The Department of Transportation needs to examine this potentially dangerous situation very carefully.

Other issues of great concern that need to be examined by the appropriate city agency including the Department of Buildings, Department of Environmental Protection or the Fire Department include:

Only two on-site parking spaces are planned for the sizable staff. This is totally inadequate.

In the applicant’s plans, there is a classroom in a below-ground windowless sub-cellar holding up to 38 two to six-year-olds next to a kitchen. We believe this is a safety issue.

In the applicant’s plans, there are only two egresses on one side of this proposed facility for a minimum of 175 children and who knows how many staff members. Another safety concern.

In the applicant’s plans, there is a sprinkler system on the cellar and sub-cellar floors but not on the first and second floors. Safety problem?

In the applicant’s plans, a rooftop playground is planned. Safety issue for this age group?

Can the infrastructure in the neighborhood tolerate the additional stress that this facility will place on the sewer system? The area is already experiencing flooding issues.

It would seem to us that if a facility is to be constructed at this site, it must be on a scale the community can handle. There must be adequate drop off space on the property, adequate on-site parking facilities, and adequate and safe space for children to play. This facility is much too large for the site.

Mayor Michael Bloomberg in his speech on the state of the city called for a revision of the City Charter in order to update and address local concerns. If a charter revision commission is established, the issues of community facilities and appeals to BSA decisions must be addressed to reflect the concerns of the public. Legislation has already been proposed to address theses problems but little progress has been made to actually enact these changes. The City Council needs to listen and to act.

See also: Abandoned in Auburndale
Posted by Queens Crapper at 12:14 AM

In the applicant’s plans, there are only two egresses on one side of this proposed facility for a minimum of 175 children and who knows how many staff members.

And which particular ethnicity
is it intended to serve .....h-m-m-m ?

Do we even have to ask?

Is his a Catholic school? I thought they were closing down.

I grew up blocks from here. This place has been an eyesore for years. The whole area is getting uglier all the time not to mention, devoid of trees. On the whole what's happening to Queens is really disheartening. It's great to see people on these boards care so much, it's nice knowing we're not alone but what can really be done to stop or at least modify any of what's being done? Money talks...

"Which ethnicity is it intended to serve?" Really? Is whatever country you're from segregated?

I'm from Queens. And yes it is. This will be a Chinese outfit.