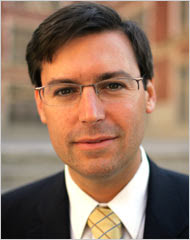 Proposed city legislation to be introduced by Council Member David Yassky would require owners of vacant lots and vacant residential buildings to file a notarized registration of their plans for their property, and pay an annual fee of up to $5,000 as long as the property remains vacant. It would also require the city to conduct an annual survey of vacant properties.

Borough President Stringer said, “We want to work with owners to help bring these properties back on line, and to use the registration and the survey to help identify and target owners who could employ current city and state incentive programs to create affordable housing.

Is that what this is really about?

In addition, as we face a potential fiscal crunch on our horizon, these measures would provide significant new revenues for the city budget.”

Ah, now there's the truth. Why not just eliminate the tax breaks currently given to developers if you want to raise money instead of forcing new taxes on people who aren't overdeveloping the city? While you're at it, stop using the trite term "affordable housing". We're all tired of it and it's never been defined.
Posted by Queens Crapper at 12:03 AM

Yassky is Brooklyn's prime example
of the sticky, mucky, sludge
that settles on the bottom of a cesspool !

Oftentimes.....
both in in government
and household sanitary systems.....
this scum needs to be pumped out
lest it causes an overflow
of vile smelling effluent!

Next time you're about to choose
a candidate running for his second term ....
decide carefully
whether he's fit for holding office.

If you decide not.......
pump out the system by voting against him !

At least their scoundrels have some style.....
while those that abound in Queens lack it.....
and are simply thugs !

In-fill each vacant lot will help their friends the developers. A property owner should not be penalized for owning a lot, it' a basic investment and in many instances will be forced to sell at fire sales instead of paying what amounts to a fine. Screwed both ways. Who will invest in NY in the future with this in place? This is a case of the porr Pols getting rich upon leaving office.

Your analysis doesn't hold up. This is fairly simple. Tax abatements promote development on properties where developers generally would not build otherwise. Take away the abatement, and you still do not have increased tax revenue because you have not revenue-generating activity.
You would prefer to have vacant lots and vacant buildings littered around neighborhoods? That is ridiculous.

"You would prefer to have vacant lots and vacant buildings littered around neighborhoods? That is ridiculous."

What Queens neighborhoods is this still happening in? I'll go take photos.

"Tax abatements promote development on properties where developers generally would not build otherwise."

Why are tax breaks given to condo owners on Roosevelt Island and along Metropolitan Avenue?

Tax abatements promote development on properties where developers generally would not build otherwise.

HA HA HA HA HA!!!! Oh man, I am going to enjoy my holiday after starting the day off with a good laugh.

My backyard could easily accommodate a modest sized home (is that affordable housing?).

Would these two soviets give my and your yard to developers?

What would we get out of it? They wouldn't fine us?

Here's another one they can crack down on: A homeowner gets a tax break for building on a property they live on. So developers from Manhasset are putting down that they actually live at their development site in Flushing, when in fact, they are using it as a source of income. This is tax fraud! Every other new building in Queens has this violation. Think how much our govt WON'T LOSE by enforcing this and how much revenue in FINES they can collect!

Maybe in the 1970s this development encouragement was a good idea, but now? Puh-leeze.

Upzone it, and they will come! No need for tax abatements. Every schmuck in Westchester and Suffolk is looking for a second home to rent out to po' folk in the city.

We now have upzoning AND tax abatements. This is more than enough incentive to build on empty lots. I'd rather offer incentives to them to keep the lots empty and maybe open community gardens on them.

The legislation makes no mention of "economically depressed areas" of the city (whatever that means). It is across the board, and no, we don't need to spur development in most areas.

Not to worry, demand for housing will tank very soon. We're gonna lose lots of jobs this year, along with lots of residents.

Stringer & Yassky - Sounds like a bad joke of a law firm that represents criminal developers defendants on Queens Blvd. They continue to represent them, huh!

Most lawyers on city council got their start at

Come to think of it, they still work there.

I wonder if Stringer kept his special $$$ friendship with Tommy Huang?