The destruction of the Steinway Mansion landscape from a better perspective 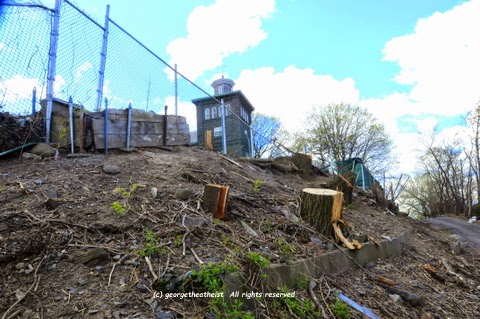 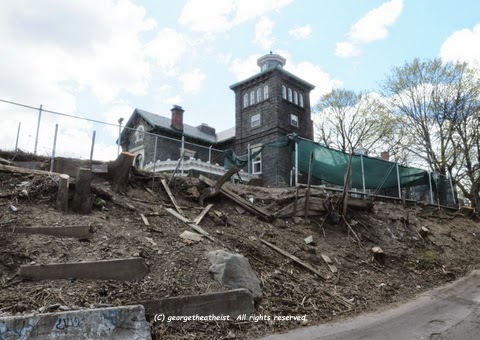 And more from George the Atheist.
Posted by Queens Crapper at 12:26 AM

Nicholas LaSorsa - You should check out the Steinway mansion before it gets accidentally demolished.

Why doesn't the press do their job and ask them about this?

How much of that land was landmarked?

This is Queens' Penn Station.
The battle field of Verdun comes to mind.
Let's see what happens when the start driving piles to the wonderful etched glass doors inside the mansion.

The press is owned by the politicians. Thanks be to Queens Crap who covers this atrocity.

Only the footprint of the building is protected. Mike Halberian thought it was the entire parcel.

He was angry that the city did nothing to change his yearly tax burden of several $1,000s from its commercial assessment. He spoke bitterly that his discussions about this with the Vallones (Sr and Jr) got nowhere.

His conversations tipped off many in the community, so after he died and before the land was divided, they begged to have the zoning changed to tax exempt status.

The reason? Changing the zoning might hurt the sell price and the new building owner's plans for the property. Hemorrhaging money on unnecessary real estate taxes, the family had to unload the building ASAP.

This was a problem that should have been avoided by responsible leadership in the community.

You read that right.

It is not an accident. It seems that there is a strong case that this is intentional as part of the process of clearing the property.

Hacking down trees...an all to familiar sight in Queens.

"String up the barbed wire...put in some pill boxes...three Maxim machine guns to the left."

Maybe this is a movie set for a Great War drama.
Who's the director?

All of those pols you've listed are missing in action.

0% of that land is landmarked. When they announced the development plan I checked it out... Turns out that none of the grounds are landmarked, just the mansion and about a 5-10' buffer all around it. Rest is vacant land. So despite being sold as a house, some developer scooped it up for a song as a development parcel. The problem is not "where are the pols" now, it's where were they then.

There is no "tax exempt" zoning status. That's apples and oranges. If Friends of the Steinway Mansion had purchased the property, it would have been tax exempt.

Look yourselves in the mirror said...

Are you men (and women) or are you mice?

Your silence is DEAFENING.

Tony Avella, can you please lend a hand here? Everyone else is out to lunch.

The designation mentions the block and lot number but it seems the Mike was duped by the politicians in thinking it was the 'entire' property.

The Friends will not say this nor the historical society, so let me make this public in their behalf:

The politicians in office now are just as guilty as those in office before - they refuse to come clean with their conversations with the developers and have done little aside from saying they are, in effect, 'good old boys' from the neighborhood which, by some fantasy, makes them appropriate stewards of one of the most historic buildings in the city.

Well talk like that might be great for Ditmars, but people around the city groaned and thew up their arms fleeing the scene. "Typical Queens" they shouted over their shoulders.

Mike warned anyone that would listen to him not to trust the city - his story on how they cut the streets through and how he and his father had to go down to city hall (with no help from the local politicians) to fight them from leaving the house stranded on top of a hill with just a ladder leading to the street - which seems to be what the local talent wants to do in 2015.

This is 'Exhibit A' of the sorry state of Queens and something that needs to be made public on our 'celebration' of the 50th Anniversary of the Landmarks Law. Landmarking is in demand through most of the city but today, 50 years after it was passed, something that our elected officials have successfully kept from the borough - even though our taxes support it and they routinely vote for designation for other communities outside of Queens.

The mansion was landmarked before the local political talent got their act together, and they are doing everything they can to take back this oversight.

The Friends stated in the press that they were ready to do a fund raising effort, they had events in the community and were ready to go big time. The talked about lots of calls from Steinway folks and others.

It was the ASTORIA politicians. They refused to give the Friends the time of day and cut off all support for the society.

The really stupid thing is the solution is so simple. Go along with the Friend's plan for the mansion and the Special Arts District.

Everyone could make 10 times a much money, the community would benefit, and all would look good and go home happy. The problem is 4 maybe 5 people stand in the way.

The phone number of the area councilman, Costa Constantinides:

[Don't just sit there. Pick up the blower and ask what's up.]

We need a non-profit which needs a place for music... Queens College's Music Department comes to mind.

Or set up a program with St. John's University for their new Museum Education Studies Department.

Think outside the box. This is too precious a place for Western Queens.

Think outside the box? By all means:

1. An isolated venue surrounded by a batch of honky-tonks will not work.

2. As it is a house with smallish room, even gutting the rooms of detail will not make it an efficient teaching space.

3. It needs some serious work to make it accessible to the public.

4. Perhaps Queens College or whatever can approach Steinway to work together.

5. Bottom line, it just seems like the FoSM Arts District makes the most sense.

Excuse me George, Poppenhusen has provided community programs fro decades and deserves the money. Steinway was privately owned and Halberian spent one million dollars putting in a restaurant type facility in the basement of Steinway. A GrecoRoman dipping poll....stained glass restaurant booths, etc. Then he was trying to foist off the property on the Queens Historical Society for multi millions of dollars. I know. I was a board member of QHS and in his kitchen when he was offering it.
He did love the building and got to die on a dining room table in Steinway while EMT worked on him.
Rest in peace , Mike. I miss you. You were a real character.

If Halberian cared that much he would have put a deed restriction that forbid carving up the land. He was a real operator and wanted to eat his cake and have it too.

Too bad. He had a real love-hate relationship with Steinway. Buy NYC should have greatly reduced his taxes for being the steward of such an important site.

They refused but have given tax breaks to criminal developers.

Developers and real estates and politicians have another successful win in Queens! Hooray for them and too bad for the residents, community and our history. Is there anyone we can contact or report about cutting down all these trees. I wonder if any of them were city owned.

Just what are the property dimensions in question here? This depicted denuded-of-trees quite hilly landscape was on the owners' property? Or on the city street? Anybody out there have the survey?

He bragged a lot about his basement pub but most of it came from his restaurant when it closed. He and his father used to rent the grounds out back in the 50s to church groups, and he tried a restaurant in the yard but the damn sewage plant was too strong. Once there when they were roasting coffee in one of the plants and released the steam: it looked like a WW I battlefield (these fellows that want to open up the food places will realize they got a rookin' soon enough). Sooo Mike even had a study done on converting the place to an inside restaurant. You what they say about Location and all that.

Mike toyed with the idea of making it a non-profit with having the historical society meet there but those ladies slipped on the ice and that was that.

Sure Mike had that Jacuzzi but he did not spend a million dollars ... except on those books. Shame the family had to sell them.

If you watch that video they took of him about 10 years ago you could see that he really thought all the land was protected and expected it to stay together.

His mistake, like all the old timers, was listening to the Vallones. Although they never really helped him with the city or the taxes (surprise) he trusted them the old fool. Every time someone would come up with an idea for the mansion he would run to them. They gave him bad advice just like those people in old Astoria who made a pittance just selling the dirt in their lots instead of making a fortune if the houses were landmarked. The only people that benefited from the Vallone clan was the Vallones. Surprise. They strung him along setting up this mess.

Mike also had to pay off his sister which also put a big stain on his cash flow. Damn shame he just got her out of the picture and whoompa.

He tried as best he could and when you think of it, he did not do a bad job considering. Man, though, he loved that place.

Naw, knew Mike for decades and if he saw what was happening he would have a shit fit. I miss him. We will never see the likes of someone like him again.

Trees are private property. Outside of screening the mansion from the shit around it, the owners are perfectly in their right to cut them down.

That's not entirely true. If there are easements to allow for road widening, then there can be trees on the perimeter of the property that cannot be touched and are owned by NYC parks. Most property has such an easement, although sanctions are rarely enforced.

All I know is there are no sidewalks in the immediate westerly area of the mansion.

Definitely makes sense. The Modern Art Foundry is just down the hill.

I heard the other day that the Vallone Law Firm helped Mike with his will.

May explain why the poor fellow thought the entire property was protected.

Do not know if that is true or not.