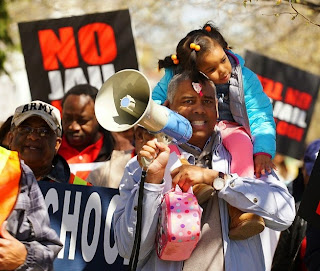 Michael Duvalle squared up in front of a two-story brick building on a quiet residential block in southern Queens and brought a megaphone to his lips. A retired security executive and local resident, Mr. Duvalle had a message for the commissioner of the city’s Administration for Children’s Services, Gladys Carrión.

“Commissioner, if you’re listening,” he began, his amplified voice ricocheting off the facade, “this is Mike Duvalle asking you to put this prison in your neighborhood, not in our neighborhood!”

Ms. Carrión was not in the building. Nobody was. But Mr. Duvalle’s bit of political theater on Saturday capped an hourlong rally by more than 40 residents of South Ozone Park, the latest action in a growing protest against the city’s conversion of the building, once a convent, into a center for adolescents who have committed acts of delinquency.

The center is part of the Close to Home program, an initiative started in 2012 by Gov. Andrew M. Cuomo, a Democrat, to place some juvenile delinquents — those who are not sentenced to secure facilities upstate — in group homes closer to their families. In New York City, the program’s centers are overseen by the Administration for Children’s Services.

The South Ozone Park center has set off vociferous opposition among some residents of the neighborhood who, since mid-February, have held weekly protest marches through the district to rally more critics. Last week, residents escalated their fight, filing a class-action lawsuit seeking to stop the opening of the center.

Residents have also marshaled the support of politicians who represent the neighborhood, including City Councilman Ruben W. Wills, who has been working with residents for months to block the project. And on Friday, the Queens borough president, Melinda Katz, another Democrat, stepped up her own opposition, sending a letter to Mayor Bill de Blasio requesting that the South Ozone Park location “be shelved” and that the city find an alternate site.

Critics say the South Ozone Park center raises concerns for the safety of neighborhood residents in the event that one of its charges escape. Furthermore, they contend, the center’s presence could lower property values.

Hmm, I can't help but notice the way the press frames these issues when it's a black neighborhood fighting something detrimental vs. a white or Asian neighborhood. I also like Melinda Katz's selective opposition. No letter was sent from her to de Blasio about the Pan Am or the Westway.
Posted by Queens Crapper at 12:19 AM

They put one of these in Astoria in a former convent - looks like a pig sty with bags of garbage and tags on surrounding buildings.

Vallone said nothing. Wonder if they were clients of daddy's consulting firm.

Community Board 1 said nothing. But they did pass comment on a number of 'eateries' that wanted approval to take over public sidewalks.

That is because if you tried to organize the community in Astoria you get nowhere.

That is unless the Padrone Don Vallone said so.

Part of the article that wasn't included here shows that the residents already have other social services facilities in their neighborhood including a group home and a men’s homeless shelter that includes convicted sex offenders.

It's fine to spread out social services, but some places never seem to get their share.sounds like this community is taking its third helping.

Katz is the developers' whore.
She'll bend over to fuck for their bucks any time.

Put one in Douglas Manor.

Hmm, I can't help but notice the way the press frames these issues when it's a black neighborhood fighting something detrimental vs. a white or Asian neighborhood.

Whatever Katz is, this article has nothing whatsoever to do with developers.

Nor does it have any information the locals haven't been reporting for months. Lame Times.

these are their own animals, their own offspring, that are to be put in there. They really dont want their own sons in their own neighborhood???

The neighborhoods that get these shelters are also the areas that are producing the homeless. Yes, it sucks that Jamaica and such places get all the shelters, but the homeless that are filling them aren't from Forest Hills or Malba.

So true.... no letter or help from Katz for the Pan Am or Westway. Sheis in the Mayors pocket. This project is a State one. It didn't cost her a thing to protest.