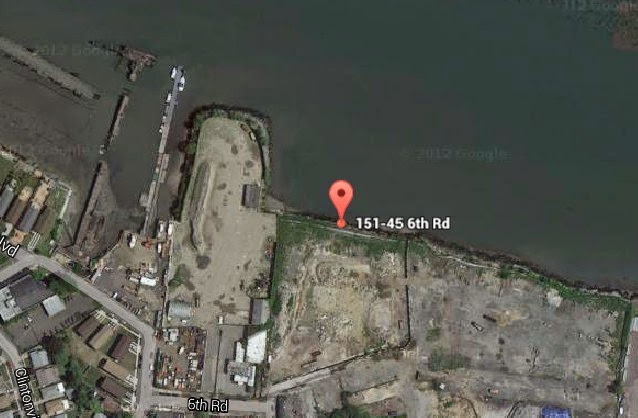 From a press release:

State Senator Tony Avella today called on the developer of a vacant lot in Whitestone to immediately abandon recently-announced plans to construct more than 100 townhomes on the property.

Edgestone Group, LLC, which owns the 15-acre lot located at 151-45 6th Road, announced at a meeting Tuesday night that the company plans to build 107 townhouses on the empty site, formerly known as the Bayrock property. This plan would bring a total of 203 new residential units to the neighborhood, nearly four times the number of units that was agreed upon in 2008 when the community board and City Council negotiated a plan for 52 single-family homes to be constructed at the site.

Last month, Senator Avella issued a warning against developers who may be preparing plans to build high-density housing at this site. The surrounding community has joined Senator Avella in expressing strong opposition to any construction outside of the originally agreed-upon plan for detached, single-family houses that will coincide with the existing character of the area.

“This developer is declaring war on the community. When I was a City Councilman representing this area in 2008, the neighborhood made it very clear that they would not accept the construction of anything other than single-family homes at this site. That sentiment was supported by the Community Board and City Council when they approved a plan for 52 detached homes to be built. It is unacceptable for a developer to come in and challenge that plan, and this kind of threat to the neighborhood will not be tolerated. It is time for us to take a stand against overdevelopment once and for all. Enough is enough. We are prepared to fight this project proposed by Edgestone Group and will not stand to see another residential area succumb to overdevelopment,” said Senator Avella.

Here's more from the Queens Courier.

(I'm sure Paul Vallone is about to put his foot down. Just wait for it...)
Posted by Queens Crapper at 12:11 AM

How's bout we shut Stinky out of the action.Visit him while he's :coaching" @ St.Andrew's or whatever the hell it is hep's pretending to do.Couldn't hurt to give him a figurative foot up his butt, either.No Valloney Baloney for us! This sin't feudal Adtoria here.

Tony Avella won't let that happen.
This area is under full attack from the developers. They see land and trees and they attack.

The residents need to join together and let their councilman and community board know, load and clear that enough is enough.

The only reason they want to pack those homes in like sausages is $$$$. Time to say NO!

The Edgestone Group will get it's way, all previous agreements are off.

The boy mayor wants sardine density housing and he'll get it because the City Council, and our local councilman, are sycophants.

We shall see if Stinky stands up for his people.

Residents of Whitestone, tell your councilman to stop this. Go visit his office. Fight for your right to fresh air and trees.

Unfortunately for Flushing residents, their senator is Stavisky, and she has never complained of over-development.

Where is the elusive Paul Valllone these days....hiding out in Sicily until things cool down?

Flood insurance will make these homes un-sellable - or, they'll be sold, with all kinds of incentives, get flooded out, and then we taxpayers will get to add money for disaster relief to the incentives. Big difference between 2008 and post-Sandy. Go Tony!

Tony will have press conferences/photo ops. Make a speech vent his outrage and frustration, have his picture taken with like minded outraged residents. In the long run all that will be accomplished is Tony will get some ink and the developer gets what he wants. Tony has grist for his re-election campaign mill and constituents take it up the scrooch hole.

Somebody once said of Toby Stavisky's husband Leonard....."The senator will do what he is told"!
Was the dynasty given instructions they must follow or else?

Back to the 1990s:
Jim Bishop, shady head of the painters union, was whacked next door to the Stavisky residence in Beeechurst. It sort of makes you wonder. Shortly after the hit, Leonard was nowhere to be seen.

The developer is a mainland China company.

So that makes 406 asian families all moving into the area! GREAT!! We are becoming china more and more by the day!!

"The developer is a mainland China company."

I figured it was Chinese money behind this. Doh!

That site is contaminated by toxic waste. Even if cleaned, how dangerous for young children who might live there, never mind the toxic dust blowing into the neighborhood during the clean up.

That site is contaminated by toxic waste. Even if cleaned, how dangerous for young children who might live there, never mind the toxic dust blowing into the neighborhood during the clean up.

You do know they have to legally clean up the site before they build, right? You probably dont

I know they have to SAY they cleaned it up. The clean ups are self-certified to the City's office of Enviro Remediation. They are not necessarily done - the developer doesn't care: not his family living there.

why did avella in 2008 not change the r3-2 zoning for this location? he clearly dropped the ball on this one because the developer can build this as of right. he was the councilman in 2008 and allowed the council to pass a special use permit for the proposed 2008 development which didnt change the zoning -this wouldnt be an issue if the zoning had been changed in 2008!!!!