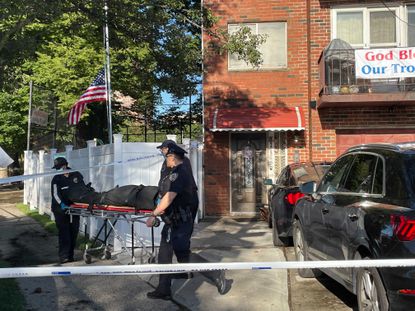 Thirteen doomed New Yorkers, all but two trapped inside flash-flooded basement apartments, were killed when the remnants of Tropical Storm Ida unleashed a lethal summer storm across a rain-soaked city, authorities said Thursday.

The dead, including an autistic 14-month-old boy and an 86-year-old woman, became victims of catastrophic flooding after the devastating weather system dumped record-breaking rain on the boroughs.

Neighbors of those who died recounted horrifying tales of basements flooded from floor to ceiling in the blink of an eye, with the victims helpless to escape the surging waters.

The tiniest victim, little Lobsang Lama, perished with his immigrant parents inside their Queens basement home after they were trapped by fast-rising floodwaters. His father Ang Lama, 50, and mother Mingma Sherpa, 48, were also killed as the deadly flooding filled their Woodside home — and even the first-floor apartment above.

“The baby was so cute,” said the little boy’s grief-stricken teacher Martha Suarez after arriving Thursday morning for her daily session with the child at the family’s home on 64th st. and Laurel Hill Blvd.

“Just a happy boy, very nice family ... They didn’t call me, they didn’t cancel me, so I was coming as usual.”

The 53-year-old Suarez burst into tears, taking deep breaths, after arriving to find the family apartment where she started work this week blocked off by police tape and surrounded by the media.

“This is too hard for me,” she said, adding the family was originally from Nepal.

deBozio MUST BE HELD ACCOUNTABLE !

Sheeple help is on the way.
debozio and NYC new flood plan includes phone alert for basement dwellers.
Most NYC voters are fucking assholes for letting this shit continue !

Just wait...it gets worst....mayor dumbdumb wants to run for governor!

deBozio MUST BE HELD ACCOUNTABLE !"

So illegal basement apartments only happened in during his term? They've been here since nineteenth century. Even during your beloved Rudy years.
You should be held accountable for your repeated upper-cased bullshit!

Don't worry...DeBlasio, local representatives, and all city council members will continue to avoid the infrastructure problems and all of the flooding problems many Queens residents had to deal with for decades.

If it doesn't concern them personally, they could care less if you and your family are flooded out every time it rains.

Continue to pay your high taxes...so nothing getting fix will continue for decades to come.

@ “voters are fucking assholes for letting this shit continue !”

True Keep voting for climate change deniers and watch it get worse.

Class action lawsuit needs to be filed to fix these clowns for once and for all.

Flash flood? Like from the sewers that are never cleaned? The diameter of the pipes, that are too small for the McMansion's 5 bathrooms? Things like lack of urban planning?

Well, well. Let me understand this correctly, Vision Zero is financed by private corporations for the city's benefit. So if the city can partner for fines and is flooding (pun intended) neighborhoods with red light and speed cameras, why can't they partner and fix the fucking infrastructure? After all the tax money is collected!
I think we all know the answer.

What dose AOC have to say about this terrible lost of life ? Crickets...
Another great donkey impersonation is not going to stop this from happening again and again !

landlords love illegal basements because they don’t pay taxes on the rent.illegal aliens don’t have to follow the same laws as American citizens- with all that tax free income from their cash businesses- they can
Afford to purchase real property
No taxes paid on the basement apartments at all - rent demanded in cash & they refuse to give tenants receipts since they don’t want any paper trail.
I’d love to see these landlords prosecuted for murder.
Life is so good in America.

AOC is AWOL. this is her district. She must be busy partying on Martha’s Vineyard with the Chosen.

Bet every one of the illegal apartments where people died this week were not "basements". They were more than likely "cellars." Every one of the landlords should be prosecuted for setting the stage for deaths to occur. Every idiot pol that supports legalization of illegal occupancies of cellars has blood on their hands.

Weather is not Climate change Greta !

Where would the illegal immigrants go if they can't live in illegal basements?

@True Keep voting for climate change deniers and watch it get worse.

Really, is not the time to push your globalist propaganda.
I understand that you cannot help being stupid, but go entertain your family members for a change.

@Every one of the landlords should be prosecuted for setting the stage for deaths to occur.


How about the fucking politicians and bureaucrats who manage the city?
Tax money is good? Cool. How are the bike lanes paid for? Free public transportation for riots? Tickets and taxes galore every day! So where is the money going?
Is this the idea for the "Great Reset"?
Bring us down to third world level instead of bringing third world up to our level? DeBozo seems to be Klaustrophobic, never seen a dumber more ignorant human being in my life.

It’s a pity that right wing nuts have blocked infrastructure projects for decades. So much so. That America doesn’t know how to build the stuff any more. Don’t know how to build subways, high speed trains, smart traffic systems, drainage.
Thank you Ronnie Regan for starting this backwards trajectory. Thank you right wing nuts for keeping it going. The March to the Middle Ages is in full swing. “Conservatives” should be happy.

@“ Anonymous said...
AOC is AWOL. this is her district. She must be busy partying on Martha’s Vineyard with the Chosen.”
You assume this or you know this? Otherwise stop spouting crap.

More people get killed by cars.Time to make them illegal.

Time to enforce the laws, and make them pay high fines and prosecute them when they ride into people, knock them down, and kill them.

Time to tell them to act more responsible and STOP at the Red Lights, STOP at the Stop Signs, and STOP running over pedestrians and let them cross the street safely.

@“ Time to enforce the laws, and make them pay high fines and prosecute them when they ride into people, knock them down, and kill them.”

A lot of what you say is true, but you conveniently leave out cars which cause most road deaths. Here in Maspeth I see them ignoring red lights, speed limits, overtaking at high speed on limited vision hills, etc.
After 8pm and on weekends it’s a free for all.

Where is AOC? You would think she’d love the press getting her photo with the grieving families of the drowned. And pushing a small bag of groceries at the displaced.If she’s not on Martha’s Vineyard with The Chosen maybe she’s partying in the Dominican Republic at her second home.

Where is AOC?
With The SQUAD hidding her from Jimmy Dore !

@“ Anonymous said...
Where is AOC? Busy making funny faces!”
Seems like you really miss AOC. Do you have a crush on her Incel boy?

Where is AOC? Busy selling $89 hoddies !

Where is AOC ? Taking orders from Mama Bear in D.C. !

Where's AOC? La Puta Loca is in DC living the luxurious life. She could care less what happens in her district except around election time.

Have you an AOC fetish?