Federal judge says no to The Blaz 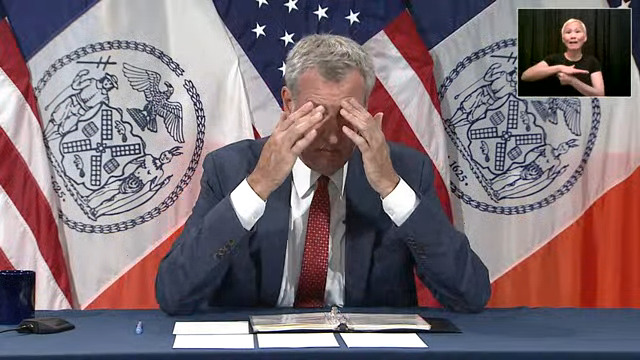 The requirement to receive at least one dose of the coronavirus vaccine was set to take effect close of business Monday, with unvaccinated staffers barred from entering schools on Tuesday and faced with unpaid leave. But a federal appeals court granted an injunction that is expected to remain in place until a panel of three judges reviews the case Wednesday.

Administrators have been bracing for staff shortages, since a sizable minority of teachers, school safety agents, and other staff still haven’t received the vaccine. At least 87% of teachers are vaccinated, according to city officials. Rates are thought to be much lower for other essential school staff, however, and the principals union said some large schools have dozens of unvaccinated teachers. As of Friday, about 30,000 education department staffers still hadn’t submitted proof that they had received their shot.

Schools Chancellor Meisha Porter wrote to principals on Saturday morning that the education department is confident the mandate will ultimately stand.

She reminded staff that the city’s vaccination-or-test requirement stands, which calls for unvaccinated staffers to submit weekly, negative coronavirus tests.

“We are confident our vaccine mandate will continue to be upheld; our students, school communities and colleagues deserve no less,” Porter wrote.

The city’s vaccination mandate faces challenges on multiple fronts. A coalition of the city’s labor unions have also sued to stop it. The judge in that case blocked a temporary injunction against the requirement.

The teachers union had also filed a labor complaint against the city, which ultimately led to the education department establishing a process for educators to receive medical and religious exemptions, and accommodations for those with medical conditions that could make it unsafe to return to classrooms.

United Federation of Teachers President Michael Mulgrew said that the federal court ruling “gives the Mayor and city Department of Education more time to put together a real plan for dealing with the expected staff vacancies the mandate would create.”

Vaccines that don't actually work and very likely make things worse is really the hill these people want to die on.

@"Vaccines that don't actually work and very likely make things worse is really the hill these people want to die on. "

Very true. Anyway, your point is mute as these vaccines work very well.

Covid cases and deaths are way since the introduction of the Vaxx.

They don't work and they are not vaccines.
You do your own research, we are not your helpers.

If they worked you wouldn't need endless shots.
Is the plumber coming to your house for the same problem endlessly?

These are not vaccines. They are gene therapy shots with questionable ingredients, some even blacked out. Why? Can you make an informed decision if you don't know what you making the decision about?

Do your research, plenty of data available and videos too from people who got really sick, some disabled after this mindless "experiment" under the disguise of public health and "community" protection.

Anyway, your point is mute as these vaccines work very well.

The CEO-s of Pfizer, ModeRNA, Fauci and the CDC gangsters all agree with you.
They work very well for their pockets.

Democrat ass fed judge!
Hope he gets COVID!
Die die die....anti vaxers! Only don’t load our ERs with your infection that could have bee avoided

If you don't like federal judge decisions, then you ain't black!

mRNA vaccines are safe. Watch for yourself...
https://www.youtube.com/watch?v=GxVcO99nG7U&ab_channel=LexClips

"expected staff vacancies"
Do away with all of them including the Union creating all these obstructions.
The School system has gone rotten from the ground up.
If these so called "teachers" are so smart they should know the virus is real, take a visit to Hart Island ferry launch. The 20 dozen or so 45 foot refrigerated morgue trucks parked (hidden) around the city.

The people of New York better wake up by voting time or this city will soon be worse then what's going on in California and Germany.
We already have the junkies shooting up, passed out or shitting in doorways throughout all of Times Square, people living in vans, semi trailers, old bread trucks all along conduit blvd, every Walmart & Home depot parking lot.

Democrats, Liberals and Socialists = NO GOOD !!
Its already gone worse then the NYC of 1977 in under a single year.
NYC will not survive another term of shit leadership.
Vote them out or be doomed !!

@"The CEO-s of Pfizer, ModeRNA, Fauci and the CDC gangsters all agree with you.
They work very well for their pockets."

That's capitalism for ya.

@"If you don't like federal judge decisions, then you ain't black!"

@"If they worked you wouldn't need endless shots."
I do my own research and from the sound of it you did none !
It's not DNA but messenger ribonucleic acid.
Did you every get a Tetanus Vaccination ?
Children need to get a booster shot at 11 or 12 years of age. Adults then need a booster vaccine called the Td vaccine (for tetanus and diphtheria) every 10 years after that.

@Die die die....anti vaxers! Only don’t load our ERs with your infection that could have bee avoided

Seems that murder, wishing other people dead if they don't agree with the lies runs in your blood. Like all other mass murderers before you, sick trait to have in a human being.

@I do my own research and from the sound of it you did none !
It's not DNA but messenger ribonucleic acid.

Do a bit more research. Did not know the Tetanus shots are mRNA.
In other news mRNA can and will write into DNA.

Also comparing Tetanus shots to what seems to be a monthly subscription to big pharma's mRNA jab experiment is fudging, shows lack of understanding about traditional vaccines and mRNA shots.

In Moderna's own words:

So you get updates as needed. Like Windows, patch Tuesday.

***Children need to get a booster shot at 11 or 12 years of age. Adults then need a booster vaccine called the Td vaccine ***

Thanks for pointing out the ongoing vaccine scam, here is the CDC schedule for human pincushions:

Educate yourself about the scam

I guess you don't buy anything because everything is a scam? Should these companies be giving out the vaccine for free?
What are you some kind of Communist? Should we all go back to the old days of bartering.

You could trade that truck load of shit you talk for one vaccine.

That's capitalism for ya.

That's left wing indoctrination for ya.

If you cannot make a difference between enterprise lvel corruption and the long dead capitalist system ask for your money back.

As Rockefeller said it once, competition is sin.

It is a big club and you ain't in it!

Actually he was instrumental in the development of vaccines.
Which makes him part of the cult.
What are you blabbering about science retardo?
Covid to you too. Enjoy Fauci's bio weapon.

You could trade that truck load of shit you talk for one vaccine.

Or we could trade with Cuba a shit face like you for a normal, educated person.
Still in the dark ages? Communism wasn't free. You paid for it moron.
Best enemy money can buy.
Just go vax yourself.

Victoria, Australia Minister of Health: 78% of those currently hospitalized with Covid-19 were fully vaccinated

Only a Twit gets he/she/it 's news from twitter.

The Tyranny is becoming unbearable. Is anybody safe anymore? What must the Sheeple do?

Run for the hills!

@The Tyranny is becoming unbearable. Is anybody safe anymore? What must the Sheeple do?

@Only a Twit gets he/she/it 's news from twitter.

Only an asshole wouldn't know about real news.