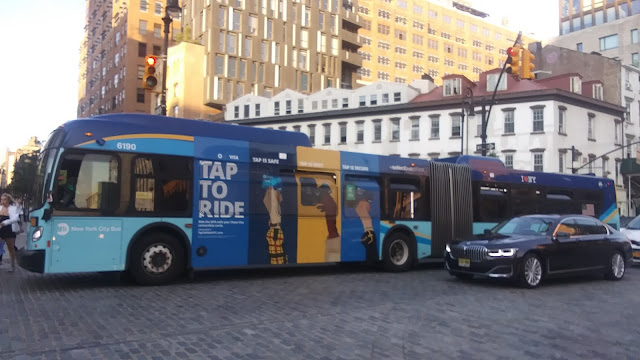 It will be five years longer than expected by the time MTA has redesigned all of its ancient bus networks borough-by-borough, after New York City Transit gurus pushed back the completion date for the mass transit project until 2026.

“We need to improve our bus system by delivering on key Bus initiatives like all-door boarding, expanded bus lanes, camera-enforced lanes, a complete network redesign in all boroughs by 2026,” wrote NYCT interim president Craig Cipriano in agency books released Friday ahead of this week’s monthly Metropolitan Transportation Authority committee and full board meetings.

The plan to modernize the bus networks was supposed to wrap “within three years” of its launch in 2018 — in other words by 2021 — under then-NYCT chief and “train daddy” Andy Byford.

But MTA put the plans put on hold during the pandemic, with only a revamp of Staten Island’s Express Bus network in place and the other boroughs at different stages of their overhauls.

Transit bigwigs recently announced they plan to revive the scheme after the 18-month pause starting with the Bronx later this month, which MTA hopes to implement by June 2022, but one transit advocate said the year-and-a-half hiatus doesn’t justify the five-year setback.

“Five years is too long to wait for faster bus trips,” said Danny Pearlstein of Riders Alliance. “The pandemic has made the redesigns only more urgent and redesigning our bus network to be more equitable should be one of the governor’s highest priorities.”

An MTA spokesman said the new timeline is only preliminary and that transit planners are adjusting to the pandemic shaking up people’s commutes.

“The pandemic is resulting in evolving ridership patterns. We want to conduct additional public outreach and allow some time for new longterm norms to develop,” said Aaron Donovan in a statement.

MTA will restart with the Bronx’s local bus network later this month, and the Express Bus routes there will follow some time after the mid-2022 deadline. The borough already had a final redesign plan before the pandemic outbreak.

The Queens redesign had a draft proposal, and Brooklyn was at a more preliminary stage, with just a report on that borough bus network’s current conditions, and “internal work” continues for those two boroughs for now, according to MTA.

MTA has yet to start any work on Manhattan’s bus network and Staten Island’s local buses.

When in doubt, remember: if the media pushes it as the greatest thing, it’s probably bad for you. Think Sheeple Think !

That's a big shame. The bus system needs a big shakeup. Cuomo should never have been allowed to force Byford out.

The Queens bus redesign had some good ideas (Longer routes! Less transfers!) and some terrible ideas (less stops, more time between buses); hopefully they can get it right this time.

Cuomo should never have been allowed to force Byford out

This. Maybe we can entice him back now that Cuomo is gone and DeBlaz is on his way out.

@“ Think Sheeple Think !”
Are the media for this or against it? I just want to know so that I can take the opposite side.
If the media change sides, does this mean that we have to flip our opinion too ? I await your answer o wise guru.

Some of the changes were very positive, some weren't so much, but at the end of the day, NYC goes with the status quo. Though it's probably not a bad idea to start from scratch in a world where work from home is not going away completely.

So called “train daddy” Andy Byford was nothing more then a station manager "suit" who couldn't work torque wrench in England.
That jackass attempt to put everything on computers screwed up the whole transit system. He also bought French subway cars that couldn't last 3 days.
It must be nice to have special friends at Bombardier

Byford was nice in that he provided a friendly face to NYCT. But the real issue is the fact that Byford and any other NYC Transit president relies heavily on senior career staff who don't give a flying fuck about the public. Just look at the jackass planners they had like Norman Silverman, Mark Holmes and Peter Cafiero.

Good. We don't need any more bus lanes that sit unused except when a bus with 10 people comes by every half hour.

Nobody should be appointed train or bus boss unless they have shop years experience of getting under a train or bus and troubleshooting it to component level. -And knowing what tools, parts and proper procedure to fix it.

These god dam "suits" who aren't capable of working a simple screwdriver, cant read a simple DMM, Schematic or Micrometre are fucking everything up.