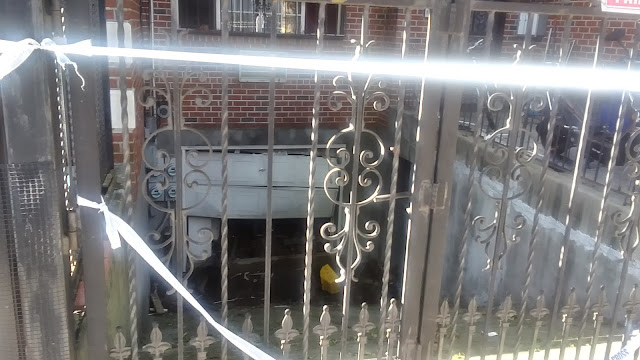 Off the street, e-bikes and electric scooters take a toll in injuries and lives.

Two Three New Yorkers died and 60 63 were injured — including 18 firefighters — in 55 56 blazes sparked by the lithium-ion batteries that power the zippy two-wheel rides used by delivery workers and other people.

In the previous year, the lithium-ion batteries caused fewer than half as many fires — 22 blazes that injured 13 people, including four firefighters.

“Before we even knew, the fire was already out of control,” said Octavia Thomas, 26, who escaped the blaze from her first-floor apartment.

Replacements, and not the batteries that originally come with scooters, are usually the ones to catch fire, he explained. “The most important thing to do is to stick with the manufacturer’s recommended batteries,” Flynn said.

Another safety tip: “Never leave the battery charging unattended,” Flynn said. “A lot of people charge them overnight and go to sleep, but we recommend you don’t do that.”

Overcharging and charging batteries in confined spaces are also a bad idea.

“People also tend to charge the batteries in the doorway of their homes, and that causes a substantial safety hazard,” Flynn said. A fire in a doorway can block escape routes, he explained.

So my house will burn down as well if I buy a non-gasoline powered electric car???

BTW does anyone of the readers know how much it will cost in electricity charges to "gas-up" an electric car?

Its all made in China crap even the real batteries

Electric car same shit.
Once the OEM battery's with all the fancy current limiting and protections are shot after a year or two you need pay near 1/2 the value of the now 2 year old car for a new OEM battery bank or go aftermarket for 1/4 the price.
That's what all the 2nd hand electric car $ scooters buyers are doing.
When those electric car battery short what you have is an 100,000 watt arc welder. You could dump the whole car in a swimming pool and it would still keep burning hotter then magnesium or solid rocket fuel.

I think this problem is only going to get worse as the cars & scooters age and start getting handed down or sold.
I had a 4.8 volt 10 amp hour lithium battery short & meltdown and that was real bad. I cant imagine a bank of 200 cells @ 600 volts at 80 amps going off in the street let alone garage. That's a shorted subway car & 3rd rail !!!
No thanks, Not in or near my house !!
The government wants these electrics on the road so bad its turning a blind eye to all the aftermarket shit people are buying to afford keeping them running.

That is correct George.


These are not using aftermarket, knock off batteries!

Remember, most fires are electrical fires in general.

Love to see one of these caught in the recent massive garage floods in Queens.

Even in a gasoline powered car, the battery will short if enough water gets into the vehicle and touches various components under the seats, trunk, etc.

So when you ask how much is to fill up, gets a bit more complicated.

Need to read this first.

Once you get good at converting kWh to miles traveled, cost of electricity for Level-1, Level-02 charging in various states (in case you travel out of state), peak and off peak hours while charging (like California), plus how long it takes to charge - you get the picture.

Agreed, Electric vehicles are big BIG scam.
The people making these EVs know they will be building and stamping them out like kids toys cellphones and computers at a 800% or more profit markup.
These cars don't need to support a 500lb engine and 200lb transmission and all the suspension shit that goes along with it.
Why so expensive ?

You have a 90-125lb electric motor (or a small motors on each wheel) and all the rest is electronics, circuit boards, power MOSFETs. The touch screens in these are standard LG, NEC used in personal computers with the same interface cables that cost what, $2 to make after all the robotics and shit to make them is paid for?
Look at the frame and body's of these cars, they are stamped out sheet metal. Load, press and remove 2 seconds BOOM DONE.

Remember how the first Bowmar brain calculator with the red LEDs was $250 in 1971 dollars?
Anyway I don't think electric battery cars can never be safe due to the nature of battery's. You cant change the laws of physics/
80-Kilowatts stored in a battery bank is a bomb or 2 maybe tanks of Acetylene (I don't know the exact BTU to Kilowatt formula) but certainly not for in a house, maintained or driven around by everyday people.
Low voltage 50 watts hour is perhaps the safe limit, that a extended run LION laptop Battery

People need to vote correctly and get these asshole, so called "leaders" out of our lives. They must be taking bribes form the e-bike and EMV builders. They are also completely ignorant to the things they are making decisions on and asking for.

To add, People are stupid
Here in New York we are told its 18.9 cents a kilowatt average residential.
What Con Ed, National Grid, daBlasshole, Alexa Cortez, greenheads and wokes are not telling you is this whopper: It cost 15 cents or more to deliver each kilowatt to your electric meter and thats billed as delivery and wire maintenance fees.
Now add NY State tax and social surcharges for the brats on top of that!!!
Perhaps somebody can do the exact math, what I have is:
In real life that 18 cent NYC residential one Kilowatt hour actually cost near 50 cents.

If a EV battery stores 40 kWh to fully charge from depleted battery (100 miles) thats around $20 to go that 100 Miles. This not including the wear on the $15,000 battery that loses capacity every time its run hot-cold-discharged-charged (depending on how hard its run and how hard the charger hits it)

I think I got this close to right,
I'm both lousy at math and dyslexic, perhaps this gives the Trolls, Wokes and AOC fans something to do however I'm sure they don't want to see or calculate it.

What we need is a better battery, More regulation on what batteries can be sold online and imported would help too.
Amazon, Alibaba etc should be held accountable for the knockoff junk they sell.

Bribes are correct, but is a lot more complicated. The global overlords are using the UN
for scams like Agenda 21.

Check. This is how it works. This is how the world works today.
There is a big need for corrupt, easy to blackmail politicians.
These scumbags are mass murderers!

Just about right. Not to mention how much is a Level-1 charger for the garage at home?
Like $1200? Takes like 12 hours for a 20kW battery? That's insane. These fuckers are making iPhone's on wheels not cars!


Here you get a pretty good idea of the current "charging" scam:

So a Level-3 charger will eat your battery and your wallet pretty quick!
For 40-80 minutes charging time, considered quick.
Heck I'm done at the gas station in 10 minutes tops.

What im finding out is if one or a few cells in these knockoff battery's short the battery's full charge voltage becomes lower.
The charger thinks the battery is low and continue to charge at a high rate mode. The battery heats up and shorts like a nuclear a meltdown!!
40,000 watts of electricity need to be exhausted before it stops.

A big problem is unlike old style NiCad batterys who's series resistance goes up at full charge making them self limiting. These Nickel Metal Hydride and Lithium Ion battery do the opposite.
Which is: Drop in resistance and draw MORE current as they take in charge.
Heat = More Shorts then fire hotter then electric welding No good !

To add these electric cars run on 400 volts, to get that voltage you need over 120 battery cells in series. Now you need to put a smart safeguards, cooling and charge limiting circuit, thermal fuse on each cell.
Some say how about a thermal fuse on each battery:
Nope: Since the cells are in series to get that 400 volts if cell goes bad and a simple thermal fuse takes a battery cell out the circuit you get a dead useless battery bank.
You cant fit all that shit and have a 100 mile battery fit in the car.

Electric car battery's are not ready yet, the greenheads and government needs to stop pushing this. Its shit, no matter how its spoon-fed to the sheeple as a meal.
This is going to get much worse, I think epidemic numbers as these EVs age and end up In Middle class hands who cant afford $15,000 OEM Replacement battery's.
These cars are only good for the rich and people who lease them new off the showroom floor then dump them on suckers after 2-3 years.
Electric bikes, Motorcycles & Scooters for the poor delivering the Chinese noodles same shit--the poor mans version.

Chevy Volt and Tesla, plenty of fires also. Winter driving, hot weather driving, ice, sleet, snow, heavy rains, can't leave the car in the garage, needs to be driven, yes applies to hybrids also - never addressed. The hip crowd and their stupid cult followers have no clue about technology not to mention life itself.

AOC wants to ban planes, she actually said we can build high speed rail or a bridge to Europe.

CNN bimbo on MH370 flight - maybe landed on the Moon.
These are some of the people on TV, some are elected officials (somehow Soros money got them in), but for God's sake no one can be this stupid!

Where’s Zoe?
At Ridgewood house minding & awaiting closing, no internet, only CB radio.
Also LASER Tattoo removal in Manhattan, L train 2 blocks down Norman Street is easier
We are City Island now, no subways or public bus to or from crap areas.
Its well buffered from the problem areas the Bronx, it was the best choice for those who don't need schools, social services, Sec 8 housing or public transportation.
Its like I remember Knickerbocker ave Bushwick as a child in the early 1960s here, mostly old hippies and Italians. Buy the Ice Cream & Lemon Ice with the wooden spoons in the corner candy store. Lots of safe affordable garage space for cars available in the old ship warehouses was the main feature
Big action, music & city heartbeat clamor on weekends.
To add everything is literally walking steps away because the Island is so small.
We are still in shock because everybody says Good Morning, even the cats come up to you and say meow.

@Joe said...
City Island still sounds nice Joe.
I was there a few years ago on the Tour Da Bronx bike ride.
Did you ever meet the Guy who owns his own Island nearby ?

You have several other even smaller islands off Orchard beach too.
The buildings on Hart Island are in really bad shape, the church steeple has even collapsed but I'm told the bell & pulley are in in safe keeping.