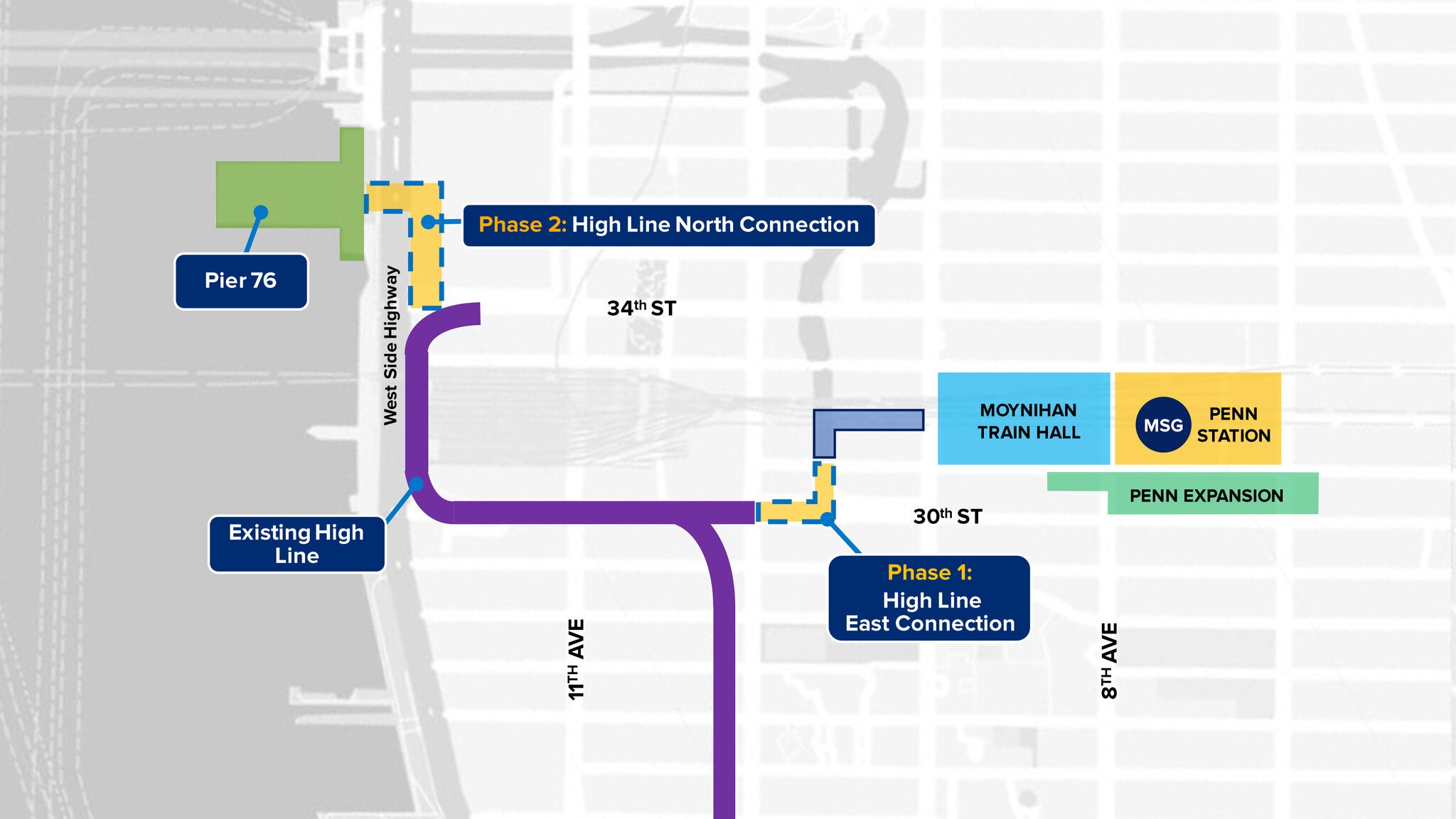 The Empire State Development Corporation — the state's main development arm — will pay $20 million of the estimated $50 million price tag, a spokesperson for Hochul confirmed. The rest will be privately funded by Brookfield Properties and Friends of the High Line, with the Port Authority contributing the land.

Like much of Cuomo's developer-friendly plans for Midtown, the extension has attracted scrutiny. It will bring the High Line directly into the arms of Brookfield's new seven-million-square-foot mixed-use development, likely benefitting the developer substantially.

In a statement, Brookfield Properties Executive Vice President Sabrina Kanner praised the "vibrant gateway connecting Moynihan Train Hall directly to the entirety of the High Line and the new West Side."

The state has also been accused of prioritizing the posh park, while ignoring critical safety and quality-of-life issues on the pedestrian-hostile streets below. The Port Authority has long used the area for construction staging and parking.

The Sheeple will lick her a s s to get the taste of Cuomo out of their mouths !

Hochul is desperately pandering to the non-whites in the hope she'll get the nod in 2022 to be the Democratic party nominee for governor. She obviously didn't learn from Cuomigula's experience that if they want you out, you are out, no matter how much you pander.
NYS will be perpetually run by 6 zip codes in Brooklyn and the Bronx.

She has no idea what is coming her way. She will be out on her ass after the primary next year.

She’s got my vote. Most of the rest of you don’t even live here. So who cares.

"She’s got my vote" You deserve what you get bootlicker !

"Pandering to the non-whites" I hope to see many more redpilled individuals in the near future as the Left can't help but cannibalize themselves.
Slavery of the mind. Where the mind goes, the body follows. Wake up Sheeple.

"Most of the rest of you don’t even live here" Really, how do you know that troll ?

You keep on electing them!

She will find out that Bowing to the woke mob is stupid, irresponsible and an act of cowardice.

This is our new Trumpanzee cage. Catch, but don't release.

Anonymous said...
"Most of the rest of you don’t even live here" Really, how do you know that troll ?

Because your much too dumb to be a New Yorker, Troll!

Ha ha ha some lefty ass-gasket saying "your much too dumb..."
It's YOU'RE not YOUR, numbnuts