A 9-year-old boy has died following a building fire in Queens early Wednesday.

The flames broke out around 2 a.m. in a three-story building on 102nd Road near Liberty Avenue in Ozone Park. Ten other people were rescued from the structure with minor injuries and the young boy was the only fatality, the FDNY said.

The boy has been identified as Remi Miguel Gomez Hernandez, police said.

It's unclear how the fire started but officials say it possibly began in the building's basement. 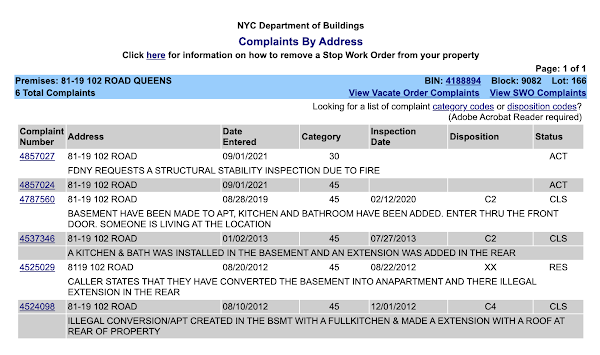 When you see something like this after a fire, it means the FDNY found something disturbing: I'm sure BdB will do something about this as soon as he gets off the Times Square Ferris Wheel.
Posted by Queens Crapper at 7:26 AM

That's how you make complaints disappear.

Not to worry the mayors office and DOB on top of all these illegal conversions in Queens. This will never happen again.

Yes an immigrant landlord from a third world country, thinks he can break the law. How many buildings does he own just like this firetrap? I am very sorry about that little boy. The landlord should be up on murder charges.

Times Square Ferris Wheel cost $20 to go around 1X in 1 minute and its only 90 feet high you cant see nothing but LED billboard
I wonder what BbB jackass cut is as these kids in Queens die
How can a such a public space be passed on to a concession owner ?

Question immigrant landlords in Brooklyn or Queens, they will say you are Racist, Against their Religion, and you don't want them or illegals in this country.

That's why they get away with breaking the laws in the cities live in. Laws...what Laws? They don't apply to them.

And no city agencies, mayor's administration, or city council members will ever create laws for them to follow, or have the guts to enforce them when they break them.

Instead, they give them the right to apply for Driver's licenses even though they are NOT legal citizens, cater to immigrants who REFUSE to learn and speak English and have voting registration flyers, voting cards written in their language.

They also allow them to apply for Food Stamps, and other public services even though they don't speak the language, or are not legal citizens and have too many children to financially support or care for on their own.

Nothing will change for the better - especially when lawmakers, politicians, city agencies, keep filling their pockets and continue to look the other way when so many problems keep reoccurring and they refuse to address them and enforce laws so lawbreakers can finally face the consequences of their actions.

The danger from a fire is immediate and very violent. Restore the Bloomberg cuts to the FDNY! Never Forget.

The danger from a fire is immediate and very violent. Restore the Bloomberg cuts to the FDNY! Never Forget.

Maybe they couldn't pull the rig out of the fire house because all of the fire fighters park their jeeps, 4x4s, and other cars on the sidewalks, including by the fire hydrants, right near the doors? How much time is wasted while they scramble to move their vehicles out of the way?