Fire ride with me 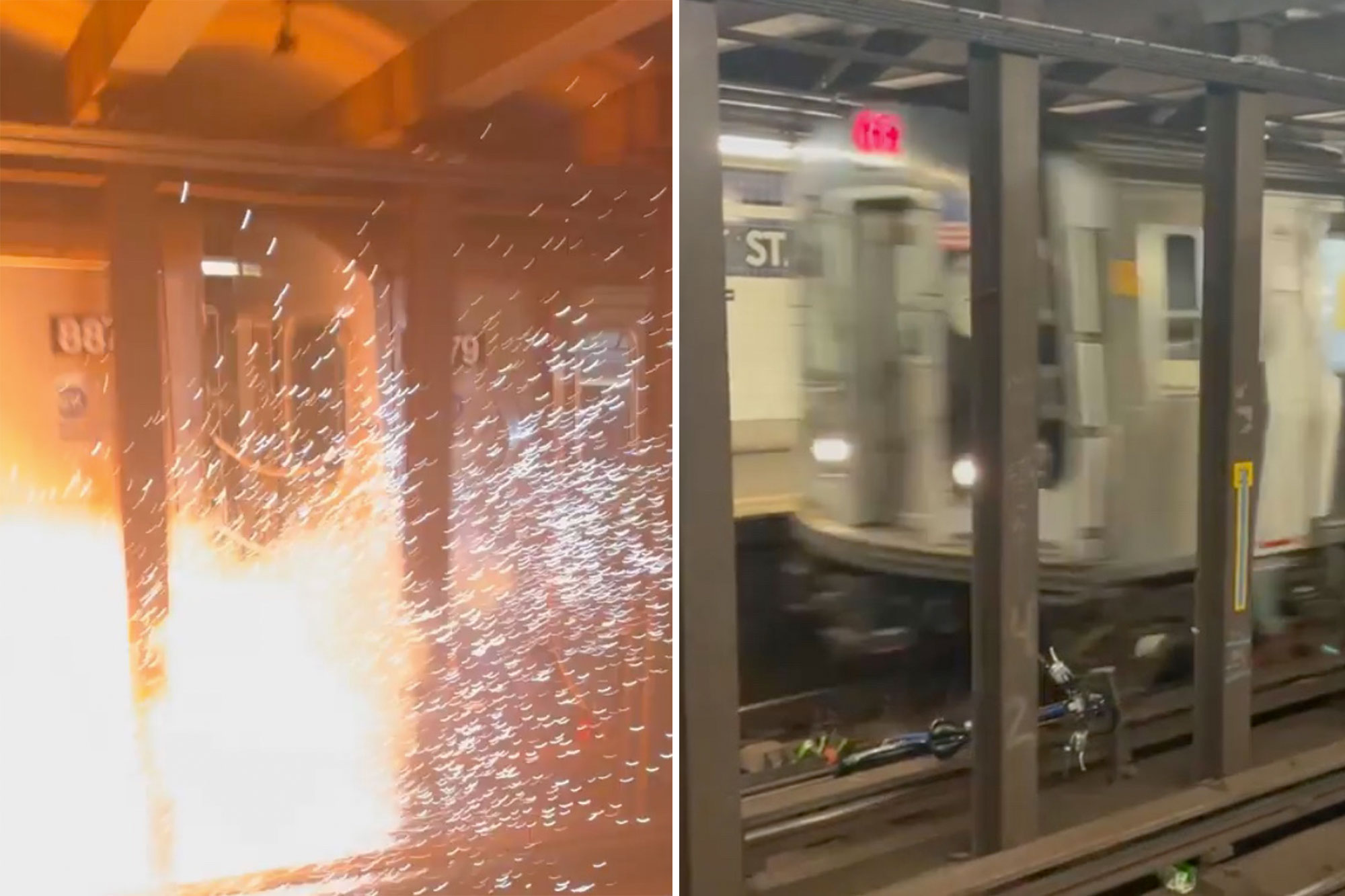 A Citi Bike exploded on the tracks of a Queens subway station on Sunday night after being “rolled” onto the roadbed and hit by a train, according to police and video of the collision.

Footage posted on Instagram showed the blue rent-a-bike strewn along the tracks at Steinway Street in Astoria while the person filming mutters, “Oh no no no” as the R train enters the station.

The train hits the bike once, then twice — then the two-wheeler erupts into flames.

The clip ends with the train stopped as the tracks and platform becomes engulfed in smoke. Straphangers can be seen fleeing the scene to avoid the breathing in the muck.

An NYPD spokesperson said the incident occurred at 10:25 p.m. when an unidentified male “rolled” the bike onto the southbound track.

an unidentified male “rolled” the bike onto the southbound track.

Pretty sure I can guess one thing that might identify him.

ex-south ozone from way back said...

LOL wantagh train station back around 1983, outside if Mulcahy's ... Some skel walks a metal grocery cart up the stairs and pushes it onto the eastbound track at about 9 pm. Frigging thing shorts out the third rail, it's like welding shop And 2 minutes later an eastbound Babylon express blasts through and its like the 4th of July.
Nobody pussied out though...

What's even more criminal then a $103 dollar monthly pass is the cutting of service.


I have compiled a list – a spilling of my mental Rolodex of the shit I shared the subway with for 3 weeks earlier this month. on a daily basis. I'm done with the subway!!

-The lady that fans herself with a piece of paper in the train car with broken a/c:
Look lady, the air is hot. Not just your air but everyone's air.

- Chinese guy with yellow nails and a bag of chicken feet:
Take advantage of us poor unknowing customers by grinding them up to use as filler in the next batch of HAPPY FAMILY from the local Jade Garden? I mean Jesus.

- Asshole with the sunglasses on:
OK, there is no sunshine on the subway. This is the L train pal. You sit there with your black as night shades on clearly staring at people for as long as you please. Your probably staring at the lady's tits who is standing above you or even undressing some poor middle schooler.

- Jerk that leans over you to look at the subway map:
Stinky ball sac is 2 inches from my face as I lean back in my seat to shy far far away from your jewels.

-The Ghostfarter:
OK, I know it may be hard to hold it, but if you had diarrhea this morning of course your farts are going to reek! I mean the train is crowded with little ventilation yet you subject us to the rotten remnants of your ass-meal. This is inconsiderate and nasty!

- Asshole with the back pack:
If your bag more than 3 inches off of your back for god's sakes put it in front of you toward the floor!

- Lady that hugs the pole on a crowded train:
Why don't you walk to work with a broomstick and hug that you shitbag.

- Nail Clipping Fool:
This means you regular business guy with no regard or oblivious Asian lady. DO NOT CLIP YOUR NAILS ON THE SUBWAY!
I'd like to take a free shot at your gut while fellow train riders hold you up.

Southside shithole using an Irish name owned by this cheap greedy Jewish asshole named Tobin. He figured he could get in on the Dublin pubs action.
I played Bass at that place twice as a temp for a local LI band.
Greedy bastard would pay the agency band and book 3 more warm-up no pay amature bands a night, cue them up in the rear parking lot.
The local Freeport, South Hempstead and Roosevelt inner city ebonic youths and skels always had a schmorchbord of busting into car windows & trunks to grab guitars, amps and anything else they could run with.
Of course the owner charging $20 admission + $8-$15 drinks never reimbursed any those people one cent for his slop and lack of back lot security or lack of band storage area despite the massive size & capacity of that shitlole.
This shit never happened at Speaks, the guys that ran it would beat the shit out of anybody who dare try to steal, hurt patrons and toss them in the canal bloodied for a good rinse.

You forgot all the vile trash who has to give a show making out for all to see!