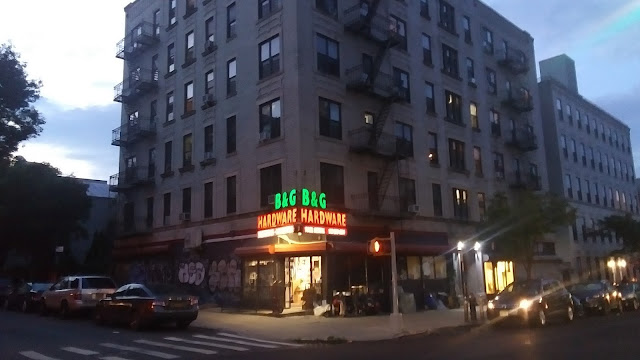 Councilman Steve Levin (D-Brooklyn) and supporters say it is necessary and bans discrimination against ex-convicts who have turned their lives around. Many have trouble getting leases once their backgrounds are known. Advocates told the Daily News on Monday that the bill would ease homelessness and shelter overcrowding.

The bill reportedly has 27 co-sponsors — and the backing of Mayor de Blasio.

Joseph Strasburg, president of the Rent Stabilization Association, represents thousands of landlords. He told the News on Monday the bill is problematic, and should be rewritten to allow exemptions.

He said landlords should have control over their properties, and have a right to prevent drug dealers, gun dealers and gang members from operating in their buildings. He also said the bill would expose landlords to unacceptable levels of potential liability. The measure is expected to come up for a vote in the next few weeks.

Great. If a tenant in a building is harmed by one of these bozos the Dems want as your neighbor they should sue the Democratic Party.

It will get nowhere with a Democratic Judge, but if one person does it, and another, and another, well then the Dems would be spending all their money defending themselves rather than building a clubhouse of yoyos that ruin our lives.

Shana tova u’metuka
May this year awaken the brains of the good democrats, in hope of saving America from the swamp

As long as AOC keeps her mouth shut, we will survive !

NYC continues on the dangerous road of “wokeness” smh

As someone who lived through wars in former Yugoslavia - you guys are in for a world of pain.

Destroying NYC in the name of progressivism? This City is done.

It’s happening so gradually. I wonder how long until all big Dem cities are Detroit.

You mean TrumpTurds and Jan 6th traitors could rent out my place? No way Jose.

Since the article didn't say, there are 51 members in the NYC Council. Looks like New Yorkers will get another fascist anti free enterprise law to turn NYC over to the criminal element. Enjoy!

Well quite silly of New York, clearly they need a new law to limit how much is allowed to be stolen before prosecution.

Business as normal in New York, get used to it.

Go ahead bite the big apple... Don't mind the maggots.

Yet another garbage piece of legislation.

And how interesting, it's being publicized too.

How much legislation has the MAINSTREAM MEDIA known about, but kept buried?

Today, we are seeing the NYC Council for who they really are.

See a trend YET?

The majority of people who are homeless are mentally ill or were just released from prison with nowhere to go. How is this bill supposed to "ease homelessness"? A convict who has "turned his life around" should have no problem renting an apartment.

Sell Sell Sell! Properties Will only lose value in NYC here on out

City council members and the politicians only fight for the rights of criminals.

Get out of prison, get free metro cards, free phones, now get to live where you want and commit all the crimes you want because "Bail Reform" will keep you out of prison and in the streets for life!!!

Vote for Curtis Sliwa in November and everyone else not associated with Adams, Deblasio, Heastie and Williams.

Soon there will be no safe places for the Sheeple !

Wonderful rent an apartment to a pedophile while there are kids that live in the building. Good luck with that one.

Is "Build Back Better" the new term for "New World Order" ?

@ Disgruntled Citoyen
Not a bad idea. This would cause a lot of issues for the TrumpTurd.

"Bail Reform" will keep you out of prison and in the streets for life !"
With Soros funded DA's leading the way !

Feel so sorry for any honest adult who chooses to live in an overpriced, overbearing Socialist State like NY and NYC. I feel so blessed to live in a Conservative Christian subdivision in the rural South. However, if I was a lazy, freeloading heathen who believes that one can be "as bad as they want to be"----then NYC would be perfect.

I never understood how NYC, with tens of millions of people and one of the highest concentrations of wealth in human history, can't find anybody to make it look like something other than a sewer about to overflow. Every single building looks tired and filthy. Even ones that are 21st century construction. Even the posh areas of Manhattan look terrible in the common areas like subways, sidewalks, and green spaces.

@“ Anonymous said...
I never understood how NYC, with tens of millions of people and one of the highest concentrations of wealth in human history, ”

Because taxing the rich is considered a communist thing.

@“ I feel so blessed to live in a Conservative Christian subdivision in the rural South.”
But your still here day in day out. Still longing for the days of slavery without which the south would be still a third world dump.

The thing that gets me are the city parks, most notably Central Park.

Have you noticed how shabby and overgrown the parks look?
The trees haven't been pruned in 2 years. And garbage piles up for days.
This may seem trivial, but when the weight of snow and ice build up on already heavy tree limbs.....?

Don't stand under ANY trees in NYC until we have new, honest elections!

@" I feel so blessed to live in a Conservative Christian subdivision in the rural South."

Christian and the south are two things that don't go well together. The South was never Christian. If you look at the evil regimes throughout history, the South comes very close to the top of the list.

Jesus, if he existed was never "Conservative(AKA Right Wing)" according to the books. He was more liberal than AOC. He was into all that caring and sharing bleeding heart stuff that Right Wingers hate so much. Now his dad on the other hand was into murder, mayhem, slavery, genocide and child raping. Much more akin to "Southern Valyas" There is no way they could have got along.

@Now his dad on the other hand was into murder, mayhem, slavery, genocide and child raping.

You get this from school, college or The Satanic Temple?

@ "Build Back Better" the new term for "New World Order" ?

Apparently. Klaus Schwab and his cohorts are building back better, meanwhile this possessed bitch who happens to be in charge of some of Australia's health system let it slip.

I pray for the Troll !

"Christian and the south are two things that don't go well together" So said the Joker !

"The South was never Christian" How do you know everything ?

"How do you know everything ?"
Because he is a shit Lib !
The war on truth is at an all time high. Keep trying to wake your family up people!!!
Ignore the POS troll, someone named him the Joker,he's outed himself as a giant douche bag!

Move along folks. Nothing to see here… Typical Dems

@“ I feel so blessed to live in a Conservative Christian subdivision in the rural South. ”

Which federal prison is that? And when do you get out?

The demons are being shook up! They are running scared and doing desperate acts! Stay strong and faithful! God bless!

@“ Anonymous said...
I pray for the Troll !”
I hope you banish the evil from his soul.
Hallelujah!

Daily reminder you are CITIZENS of the United States, Not SUBJECTS of the President.

So when does the mandate pass requiring only criminals be allowed to rent? That's how insane NYC has become.

@"So when does the mandate pass requiring only criminals be allowed to rent?"

Next Monday morning I believe.