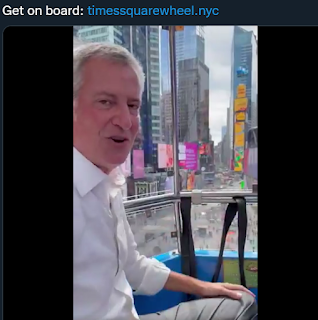 Hundreds of inmates serving time on Rikers Island are set to be sprung prematurely as part of a desperate bid by Mayor Bill de Blasio to deal with the shortage of correction officers willing to work there, The Post has learned.

The horde of ex-cons — who could be freed starting Tuesday — would comprise the second wave of convicted criminals granted early release since last year, when officials used the COVID-19 pandemic to justify putting around 300 jailbirds back on the streets.

Those inmates were among more than 1,500 who were freed last year due to the coronavirus crisis, reducing the city’s jail population to 4,363 — a level not seen since in more than 70 years.

The latest plan comes amid a surge in shootings and serious assaults that helped push the average daily jail population to 5,730 in July, its highest in more than a year, according to the most recent statistics compiled by the state Department of Criminal Justice Services.

The newest batch of early releases were set to start last Thursday but were delayed when the remnants of Hurricane Ida struck the Big Apple and killed 13 people, law enforcement sources said.

“The mayor wants to close Rikers and he will use any opportunity to release the prisoners,” one source said.

“He is leaving in three-plus months and he wants to release as many prisoners as he can.”

The inmates under consideration include Allen Nimmons, 56, a career burglar who’s served seven prison sentences and is locked up for violating parole, sources said.

Another is Rashawn Powell, 30, who’s serving a sentence for three counts of dealing drugs on school grounds, in addition to bail jumping, sources said.

But officials are keeping the names of those set for early release closely guarded because de Blasio “doesn’t want the pushback that he got last time when he released dangerous felons,” a source said.

“There are only the worst kind criminals left in jail — people with gun arrests, shootings, sex crimes, etc. No one is in for shoplifting,” the source added.

Makes Bloomberg, Dinkins, Beame and Lindsey all look like paragons of greatness by comparison!

No surprise here.
Those hard criminals are his para-military to destroy the city and force small home owner NINBY landlords to sell and move before property values tank.
Then bust ever block with landlords willing to take sec8s, 5150s and problem people.
Same shit they did in Ukraine "hey criminals go take your slice of the pie"
BTW 1/2 the criminals and MS-13 Gang Bangers on Rikers are not US Citizens and were supposed to be deported years ago.
No they are going to be OURS, this is what socialism gets you.

People better vote Sliwa or this city's fucked and will never recover from the damage!!

Maybe he's making room for traitors when they try to storm the Capital building again.

Nobody has ever said "we need more government" and liked what they got.

You’ve got no problem with “more government” when you get your social security or unemployment checks huh?
AND...,unless you can afford private school....your kids are getting government PUBLIC SCHOOL education.
Perhaps you should go back to school.
Sounds like your ignorance has betrayed you!

Just another push for Hi-Rise development in your neighborhood. This time it's Hi-Rise prisons, that won't work and will endanger your very existence. There's money for developers in this idea. Now your great leader, DiBla wants to be your governor. Good luck, New Yorkers.

Sheeple knew who they voted for so crying about it now is just pathetic.

Move them to Park Slope where the dope lives.
Let’s hold our breath til the dope from Park Slope is gone!

"Just another push for Hi-Rise development"
We all could live with that but it's not the main objective of Big Bird. He is a Marxist to
all the way the bone and wants to destroy the last good places to live in NYC by flooding
them with crime !

1. Abolition of private property in land and application of all rents of land to public purpose.
2. A heavy progressive or graduated income tax.
3. Abolition of all rights of inheritance.
4. "Free" education for all children in government schools.

No worries, he is just making space for himself.

Why would anybody be bothered reading any link you past from some website put up just to make an idiot out of gullible people like you?

@"Anonymous said...
#DEFUNDTHEUFT Save our Children !"

What has this got to do with the UFT? Did some teacher give you an "F" back in the old days. Then again why am I asking, I bet all teachers gave you an "F". Maybe it was "F" for freak-show.

Actually, you can start a DEFUND THE UFT movement. The UFT's supplemental benefits program for its members is called the UFT Welfare Fund, and it receives hundreds of millions of dollars from NYC government every year. You NYC citizens can stop this by demonstrating against it. Much of the money is spent on political ops for the UFT, not for actual supplemental health benefits, i.e. The Retiree Programs portion of the FUND. The UFT actually uses these retirees to contact it's members and reminded to vote only democrat. Now you know. Do something about besides sitting on your asses and complaining. The UFT loves the $400 million a year that it gets from you and would face disaster without it. Go for it!

@"Actually, you can start a DEFUND THE UFT movement"

Did your teacher never tell you that you shouldn't use all upper case words? Then again, when you are in the special ed class, you don't have to worry about such things.