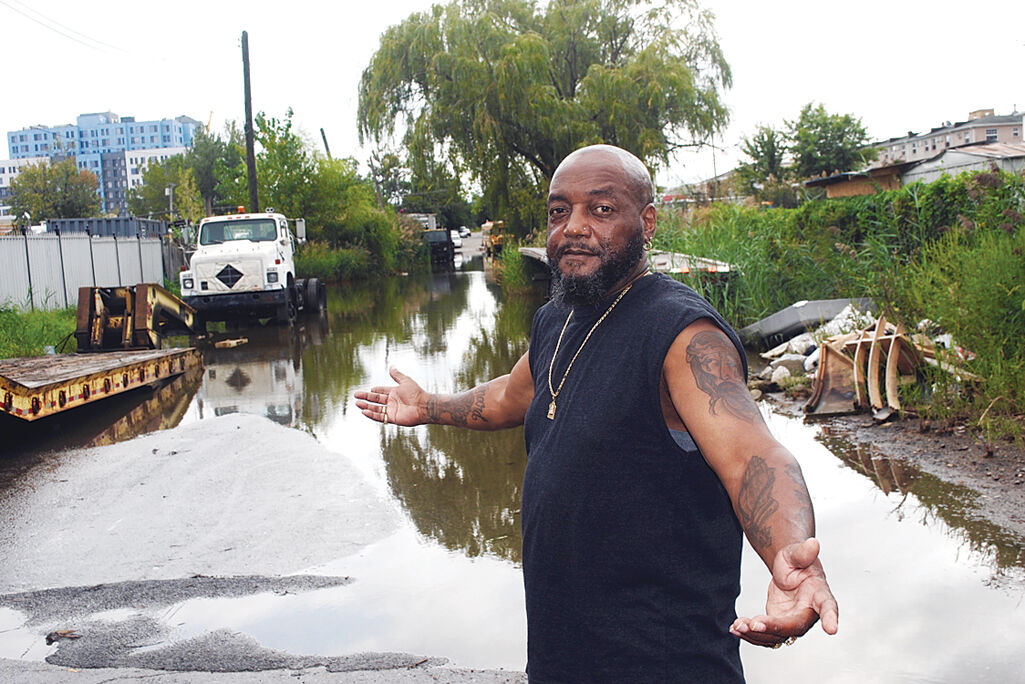 The residents of The Hole, a small neighborhood on the northwestern edge of Lindenwood that sits more than 10 feet below street level, are no strangers to flooding.

Overflows that continue to burble up from the ground over two weeks after a rainstorm, on the other hand, are a new phenomenon.

A neighborhood with a history of neglect, The Hole lies in a 12-block basin that lacks a sewage system and is largely without street drainage. Though the city has begun the process of installing limited drains in the neighborhood, it has stalled on taking the steps to connect the area to the sewer system for over 15 years. As city officials continue to reckon with the fact that the limited capacity of New York’s beleaguered, antiquated sewer system led to Hurricane Ida’s fatal flooding, residents in the neighborhood continue to live with the storm’s after-effects.

Some residents are hopeful that the newfound pressure on the city to modernize its sewer system could kickstart a focus on their neighborhood. Others, who have grown accustomed to having their infrastructure needs summarily ignored by city agencies as the surrounding area has developed, do not believe that the storm will help change conditions.

For its part, the Department of Environmental Protection did not recognize the instances of recent extended flooding as being related to the storm. The agency pegged the residents’ recent problems as resulting from systemic groundwater flooding, rather than the hurricane.

The residents beg to differ.

“It usually would go down quick if we got some water in there,” said Ruben Garcia, a homeowner who’s been living on the Queens side of the neighborhood for 52 years.

Garcia has had flooding in his basement before but nothing quite like what Ida caused. Years ago Garcia’s daughters slept in the bottom floor of his house, which has intermittently been flooded by groundswells of water for two weeks after the recent storm.

“The last 10 years it’s gotten worse,” he said of flooding on his block.

I wonder if global warming has anything to do with this.?

Weather is not climate change !

I wonder if global warming has anything to do with this.?


Gee, why don't you tell us.
Maybe you can also explain the 26 active volcanoes around the world right now.
Infrastructure neglect, lack of urban planning are pretty hard concepts for some people.

@"Maybe you can also explain the 26 active volcanoes around the world right now. "

Gee I was waiting for you to tell us. I searched infowars and Q-anon for the latest on volcanoes and didn't find anything relevant.

@"Gee I was waiting for you to tell us"
I can tell the Chemtrails broke your brain !

Dopes complaining should have never built, rented or bought there.
When you live feet from the water #1 rule is to understand its only temporary and you can be homeless at any time.
Rule 2: Never rely on the government or cops to save your ass if you don't have power and money to buy representation.
The Indian tribes (Carnesie I think) even knew not to build there, old pottery & arrow heads are always found much inward, upland on higher ground.

@I searched infowars and Q-anon for the latest on volcanoes and didn't find anything relevant.

That's because you are a stupid activist and visiting irrelevant sites.
Once you get the Communist Manifesto out of your ass, try sites that actually have up to date information about volcanoes. Red triangle with a v on top of it means active eruption.

What the heck is Q-anon?
Is the Internet version of Mockingbird brought to you by the Company?

We could go to the moon, but installing a bunch of big pipes underground is too difficult.

@“ warp10 said...
We could go to the moon, but installing a bunch of big pipes underground is too difficult.”

That’s because crazy right wing nuts have been on a rampage for 40 years. No more building anything except a useless wall to nowhere. They want to bring us back to the Middle Ages.

@We could go to the moon, but installing a bunch of big pipes underground is too difficult.

"We could go to the moon, but installing a bunch of big pipes underground is too difficult"
-------------------------------------
Its no so simple.
NYCs sewer system is gravity operated, to go below a certain grade or sea level you need pumping stations and massive electricity to run such big pumps.
Also storage cisterns to buffer surge water
Who's property or park do you confiscate to do this and who pays for it in a city is being run into bankruptcy ?
Upgrading the sewer system is even more complex, it will never happen. City's no longer have the brainpower, skilled labor. I think any attempt would turn into a disaster, look at the debacle botch job that happened in Middle Village.
I talked to some of them DUMB AS ROCKS so called professional Union labor, Grandpa and Daddy and a dumbed down test got them those people union cards not skills or work ethic!!!
Handing out contracts wont fix the problem because stupid people making stupid decisions are the problem.
Getting rid of all the illegal apartments and stupid and illegal's throwing pig grease down the drains would solve most the problem. Pig grease forms solid hard as rock floating fat plugs in the system that is near impossible to snake or get out without digging up the whole street.
These dam small car sized fatburgs hit & break into smaller chunks and travel, and you never know what's going to get plugged next.
The so called immigrants doing the same shit they do back in the home country's are horrible !! Actually worse, In most of Mexico & Central America they have no sewers, they dump cooking grease, scraps & garbage on the grounds they live on.

@", they dump cooking grease, scraps & garbage on the grounds they live on."

Real Mericans ship their garbage to other countries.

Partially true. Of course is gravity operated, but that's not the point.
Areas flooded in North East Queens are not below sea level.
Also illegals in the basements is not applicable.
Lack of sewer maintenance is.
No pig fat in the sewers, but plenty of leaves, dirt, bottles.
Last cleaned about 10 years ago.

Some streets have the new pipes, just drive around Utopia Parkway and you'll see the work.
Some areas already have the work finished. Guess what politician lives in the area?

4" pipes for sewer mains are form 1950-s. While illegals are not an issue, legally obtained permits allow construction of McMansions. Couple of years ago there was an article, one of them functioned as a hotel with 11, yes eleven bathrooms.

Lack of urban planning, aging infrastructure, lack of skills and know how all are contributing factors. Bike lanes should not be the priority.
Hurricane Sandy did not flood the area like Ida. Wonder why.

@“ Bike lanes should not be the priority.”

Nor should car lanes be a priority.

No pig fat in the sewers, but plenty of leaves, dirt, bottles.

I don't know who told you that (some politician or rep in a suit ?) but my snake, dredge cutter heads and boots on the ground say otherwise.
Its no doubt fat & grease causing most the trouble, not leaves, not cans & bottles.
Adipocere, also known as corpse wax or graveyards fat, is a product of decomposition that turns fats & oils into a rock hard soap-like substance.
Adipocere (Corpse wax) forms through a process called saponification when animal fat is exposed to anaerobic bacteria. Our sewers and #2 are loaded with anaerobic.
We have too many 3rd world slobs, on 3rd world diets with 3rd world shit for brains.
It equates to a daily full frying pan of bacon grease for every 3rd or so home resulting in fatbergs as large as pool tables after a year or so in some areas


On the 4" pipes for sewer mains:
Those are street to basement mains, many were soft 4- 5inch asphalt pipes that are compressed or partly collapsed, flaked after 100 years. They now behave more like 2-3 inch pipe if at all.
10"- 36" circular pipe or 14"h x 23"w to 29"h x 45"w horizontal elliptical pipe 23"h x 14"w to 45"h x double 29'w vertical elliptical pipe 42" round street service or trenches in tunnels. Not including tech on Combined Sewer and Overflows
I don't want to get technical I just want to teach people so the need not listen to our politicians lies

If a storm hits and all the shit backs up into 4" pipe to the house with no check valve or pump one better hope the house line gets plugged, if not your gonna have massive shit cannons in the basement with no time to react.
Double the gallons per minute with modern 6 inch pipe, that's when people say "Holy Shit" and run.

Yes. Why cant these people eat real food like big macks, hot dogs, taco bell tacos and marshmallows.
This is the food that has made America great.
Communists.