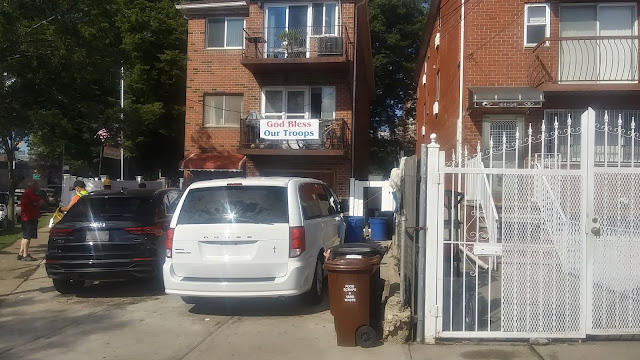 Police officials are investigating the six incidents in which basement apartment dwellers lost their lives during last Wednesday's storm, opening up the potential for criminal charges against homeowners who may have created dangerous conditions for their tenants.

Of the 13 people who were found dead in New York City, 11 were trapped in a flooded basement, and the Department of Buildings has said that five of the six of these were illegally converted basement or cellar units.

Multiple agency investigations into building-related deaths are not unusual. Following its investigation, the NYPD may elect to refer the case to the Queens or Brooklyn District Attorney's office. Five of the homes where people died were located in Queens, while one was in Brooklyn. The one basement apartment which was a legal unit was located on Grand Central Parkway in Queens.

During his morning press briefing on Tuesday, Mayor Bill de Blasio was vague about what kinds of punishment homeowners who rented their basements illegally might face.

"We are going to hold people accountable, but not in a way that punishes the tenants," he said.

In 2019, the city launched a pilot program to legalize such units by providing low or no-interest loans to homeowners seeking to bring the apartments up to code. But the mayor recently called the effort a failure, since it failed to solicit much interest.

"I could tell you that we've got some miraculous plan to solve the illegal basement problem overnight. We don't," de Blasio said. "It is a massive structural problem in the city. It has been for decades. We don't have an immediate solution to this one."

The city estimates there are at least 50,000 basement units, housing more than 100,000 residents. But one tenant advocacy group, NYC Base Campaign, has counted more than 312,000 such units across the city.

Illegal basement apartments are infurating since in addition to being a death trap, they represent a drain on resources in the communities they exist in. For example, basement landlords are still paying the same tax that someone who doesn't rent does.

Do what Elmont/Nassau County did a few years ago: You want an illegal apartment; ok, we're changing your tax rate from a single family home, to a 2-3-4 family home.

Do this, and see the illegal appartments disappear.

I remember back in the 90’s there was no parking in Elmont because every house had a contracting van parked in the driveway and all the illegal tenants cars parked on the street.

Hey - the horses are out of the barn. Good time to close the door?

If the landlord is not reporting the income it's tax evasion. DOB is not able to get in when illegal conversions are reported so no action results. Now DOB,FDNY,NTPD etc all have grounds to go in, do it and nail all of them all over Ons with violations and COLLECT the fines

Nothing will be done....

But of course, the liberal controlled City Council and state legislatures will never let this happen. Gotta let the basements serve as shelters for the illegal aliens flooding the city.

Wow, all those tax avoiding, regulation fearing Republican voters will be really pissed off.

I'm going to Home Depot to buy storage shed for my back yard. Then I'm going to rent it out for a tenant or two. They can wash-up in the bird bath and crap in a bucket.

WOW, if my response with my job was "We don't have an immediate solution to this one.", I would be fired, so would most.

Also this is not a Liberal vs Conservative or Republican vs Democrat thing. This has been an issues in NYC for DECADES and no administration has even attempted to address this, yet along come up with a solution. NYC answer to everything is keep ignoring the problem till it explodes to a monstrous problem.

Not exactly
The is part of the upcoming blackmail scheme.
They evacuate the current tenant, bang you with summonses then offer you a deal to forgive, bring everything up to code (including financial aid) rubber stamp if your willing to take a Sec 8 tenant.
You lose all your rights to select who lives in your home and must let the city in any time it wishes.
(A homeowner who actually resides in the home is allowed to discriminate)
BUT--Once you agree to a Sec 8 contract its impossible to undo and the Sec 8 clients (usually pregnant single mothers with several children, problem people destroy the home.

"Wow, all those tax avoiding, regulation fearing Republican voters will be really pissed off. "

In NYC Republicans? hahaha you must be dreaming buddy.
DeBozo managed to piss off regular folks, the dangerous condition was created by him, in the big rotten apple, the smart city cannot handle regular rain water in the antiquated sewer system, where the criminals charge double sewer fees on the water bill.
Better yet he is trying to profit from the tragedies with his fellow commies, by pointing to global climate change, which is really funny, considering he is a functioning illiterate including Al "I invented the Internet" Gore, their climate king.
Will be funny to watch when at the DOB some of these dwellings will have numerous violations and he DID NOTHING about them! Be careful what you wish for.

Worked in the 90-s, that's how all Japanese real estate investors got relieved of their monies invested here. Think Rockefeller Center, SONY.

However, today, Blackrock, Vanguard, State Street are the big investors, buying up everything, will be difficult to tax the CRAP out of them, since they own the politicians.

"This is not a Liberal vs Conservative or Republican vs Democrat thing"
Really in NYC, it's always a Democrat thing !
The whole state is #BLUEANON

You mean the illegal food truck owner who bought a 2 family house with tax free dollars then made it into an illegal boarding house will have to pay taxes on the income? And properly taxes will be raised? You evil white man you evil Karen!
What’s a few floating tenants when illegal aliens are making money?

@“ The whole state is #BLUEANON”

Is #BLUEANON something like “Back the Blue”,?
Like those people with fake USA flags with black and blue stripes?

Wait, I thought he wanted more basement apartments? He should google himself more often

I left NYC decades ago. I used to live in a basement apartment. It was all I could afford. Good luck if anyone thinks this will ever be changed.

Charge the landlords where tenants drowned with murder.

@"Charge the landlords where tenants drowned with murder."

Sorry, you can't go after the "Job Creators". The Chamber of Commerce would never allow it. It's un-American.
Instead, go after the little guy, the tenant. Easy pickings and much more American.

Charge the mayor too!

Good! DOB sat on its ass for years.