Eric Adams games the DOB and the IRS 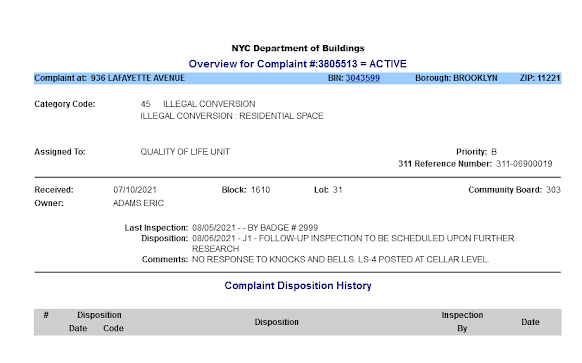 Eric Adams, the Democratic nominee for mayor, is also a landlord who owns a four-unit red-brick Brooklyn townhouse where he says he rents out three apartments and, since 2017, has lived on the ground floor.

But tax and city records show potentially serious irregularities tied to his management of the Bedford-Stuyvesant property.

The city Department of Buildings is investigating a complaint alleging an illegal conversion of an apartment in the Lafayette Avenue building — and hasn’t heard from Adams since an inspector plastered a notice on his door more than a month ago, demanding a response.

The filings could have allowed him to reduce his taxable income by tens of thousands of dollars, accountants who reviewed the records at THE CITY’s request say. After amending three years of tax returns once already, he will be refiling for 2017, 2018 and 2019 yet again after THE CITY pointed out irregularities to his campaign.

And THE CITY has learned that the accountant who signed Adams’ tax returns was fired from his job four years ago managing a Harlem co-op building following accusations of embezzlement.

Adams purchased the Lafayette Avenue building in Bedford-Stuyvesant from the federal government for $361,000 in 2003 when he was an NYPD captain. Last summer, after POLITICO NY raised questions about where he actually lives, Adams gave the press a tour of what he said was his apartment there.

Sounds like Adams is a typical retired member of the NYPD.

"Sounds like Adams is a typical retired member of the NYPD"
No a typical DemoRat fake progressive !

Let's quickly retire this racist, mangy NYPD sewer rat (so that Curtis Sliwa can begin the dreaded job of reversing decades of anti-American, un-American, anti-middle class, DemonRat controlled damage) and send him WAAAAY downstream to the faraway wetlands, and into oblivion, so that he can finally be out of New York's politically failed decibel levels of extreme 'Noise & Sight' pollution that has already, and LONG ago, betrayed AL pretense of public trust, ethics, integrity, accountability and transparency, as well as 'Taxation WITHOUT Representation' (and, now a ubiquitous 'Taxation WITH CITATION': Think speed cameras that continuously punish ALL drivers by endorcing artificially low speed limits that are knowingly impossible to maintain, while the city collects grinding commerce around the clock, IN PERPETUITY!)――replete with ZERO social contract, ZERO social TRUST, and ZERO credibility, whilst New York City's ever crumbling, decaying and eroding infrastructure, and the party-machine-failed scourges (of corporate obedient controlled destruction who control the carnage), continually diminish our once great, egalitarian metropolis into an ancient Roman graveyard of 'NAKED GREED,' cognitive dissonance AND Obsessive Compulsive Disorder (OCD)――three forms of mental illness for which there IS no cure.

“Sounds like Adams is a typical retired member of the NYPD.”

The two missing elements in Adams’ case are; he hasn’t opened a bar and has not been arrested for domestic violence.

There is still time.

Sounds like every other politician out there. He will definitely be elected in November.

Most voters in NYC love voting for lawbreakers, liars, con artists and crooks.

FUCK YOU WE'RE HEROES!!! NOW STFU WHEN WE STEAL YOUR STUFF; INSURANCE WILL COVER IT. AND KEEP PAYING MY 3/4 PENSION WHILE I TRAIN FOR TRIATHLONS.

The REAL problem here is why anyone in New York State, as well as the rest of the nation-at-large, continues to rely on the same, hyper-corrupt, entrenched, corporate obedient, establishment-rigged, two-party-machine-failed duopoly disease-CULT when they both have abundantly showed you that these exclusionary parties of government tyranny are all about hastening YOUR demise!

But, ALAS, you just keep voting (doing the same thing, over and over, while expecting a different result), when voting merely gives consent to political thieves to keep gaming a system that was never designed to benefit its indoctrinated, INOCULATED voting plebeians in the first place. It's all rigged and controlled by the ruling classes; the same ruling class families that have maintained a stranglehold over We, the People that will never end, nor will their relentless world domination ever end to keep raising taxes by totalitarian force, and criminally unstable governments that keep the holding pattern in play——IN PERPETUITY!——and, the public be damned. What? THIS IS NEW???

❝The urge to save humanity is almost always only a false face for the urge to rule it.❞ ——H. L. Mencken

❝ALL tyrannies rule through fraud and force, but once the fraud has been exposed, they must rely exclusively on force.❞ ——George Orwell